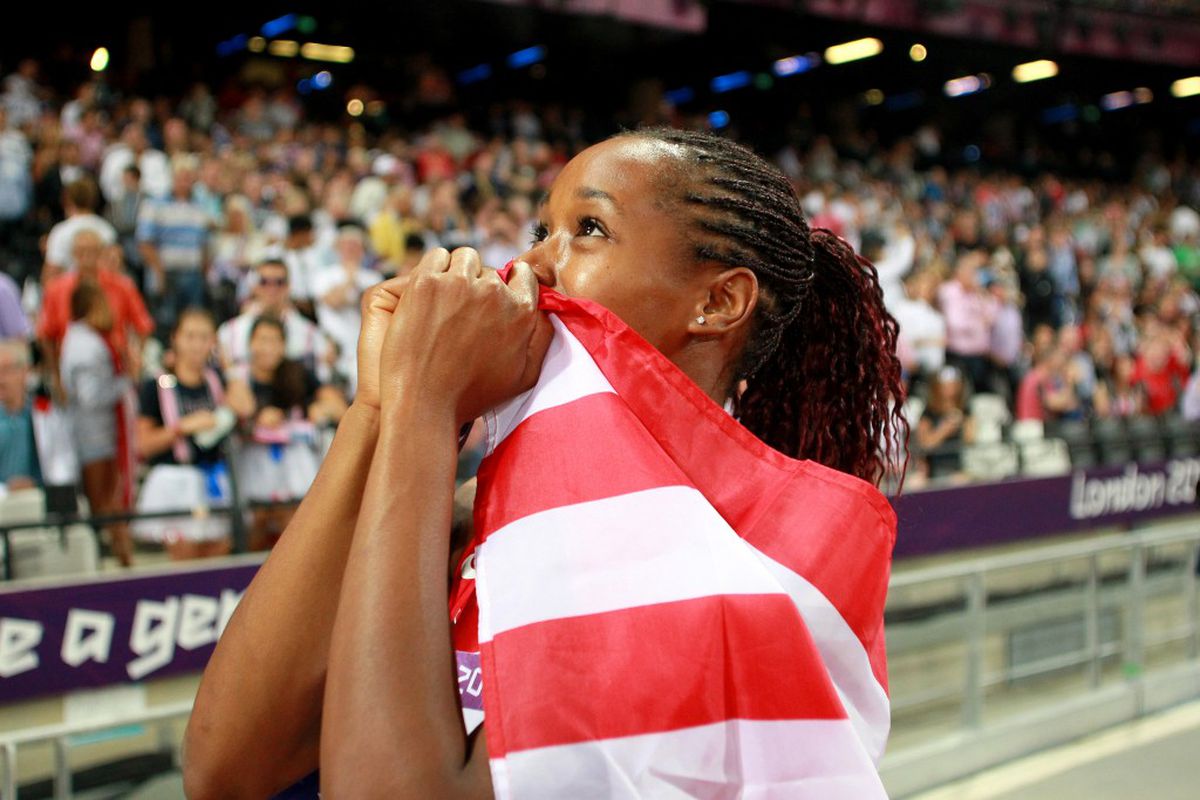 Janay DeLoach, the former Eielson High star, wraps herself in the flag as she celebrates her bronze medal in the long jump at the 2012 Olympic Games in London. (Victah Sailer / Photorun.net)

Janay DeLoach, the former Eielson High star, wraps herself in the flag as she celebrates her bronze medal in the long jump at the 2012 Olympic Games in London. (Victah Sailer / Photorun.net)

Take this quick test of your fine motor skills. Let's say you're right-handed. Try using only your left hand to complete an ordinary task – brushing your teeth, forking a salad into your maw, texting or, if you've got some dice-roller in you, shaving.

How's that working out for you, champ?

And to think, you're not even trying to be world class, like Olympic bronze medal-winning long jumper Janay DeLoach, the former Eielson High star who in the last 18 months has undergone a mechanical change as dramatic as it is difficult.

Two surgeries on her left ankle in 2014 forced DeLoach to switch to using her right leg as her take-off leg after a career of left-legged launches. The change also required her to alter her approach run before rocketing herself airborne. She also needed to increase strength in her right leg and complete endless repetitions to become more comfortable jumping off her right leg.

[Check out the The Coloradoan's coverage of DeLoach's comeback in 2015.]

DeLoach, who seized Olympic bronze in London in 2012, managed the switch well enough to finish fourth at the World Indoor Championships earlier this year in Eugene. Still, change has not been easy as the U.S. Olympic Trials approach this week in Eugene.

"Man, to say it's difficult – there are not enough words,'' DeLoach said by cellphone from her home in Fort Collins, Colorado. "Mentally and physically, it's been a challenge. It wasn't easy, and it still isn't easy.

Even so, DeLoach, 30, owns the second-best long jump by an American woman this year. Her leap of 22 feet, 7.25 inches at the world indoors trails only defending Olympic champion Brittney Reese (23-8.25).

DeLoach, who graduated from Colorado State and works as an occupational therapist, owns a personal record of 23-0.75, which she delivered in the 2012 Olympic Trials. She said she knows she can still improve jumping off her right leg but needs to be patient.

The case of 2012 Olympic gold medalist triple jumper Christian Taylor lends hope. Recurrent pain in Taylor's left knee in 2014 prompted him to switch to his right leg for takeoff, and he seized the world outdoor championship last year with the second-longest leap in history.

DeLoach said working with patients who have suffered a stroke, undergone knee or hip replacement or suffered a catastrophic injury has helped her emotionally.

"It's humbling to see people in much worse shape than me, and it gives me perspective because I know what it's like to be non-weight-bearing, and I understand what it's like to give up one side of your body, like a stroke patient,'' DeLoach said. "It gives me much joy and inner peace to see someone who comes in and can't walk, and they go through their therapy progression and we see them walk out.''

DeLoach also will compete in the 100-meter hurdles at the Trials. She's ranked No. 16 among Americans this season, based on the 12.88-second race she generated earlier this month at a meet in Switzerland.

The long jump, though, remains her signature event. And securing a top-three finish in Eugene to qualify for the 2016 Olympics in Rio and earn another shot at a medal remains her immediate goal.

"That's what I'm shooting for, to stand on another podium,'' DeLoach said. "I want to say I went to two Olympics and got two medals. That would be a blessing.''