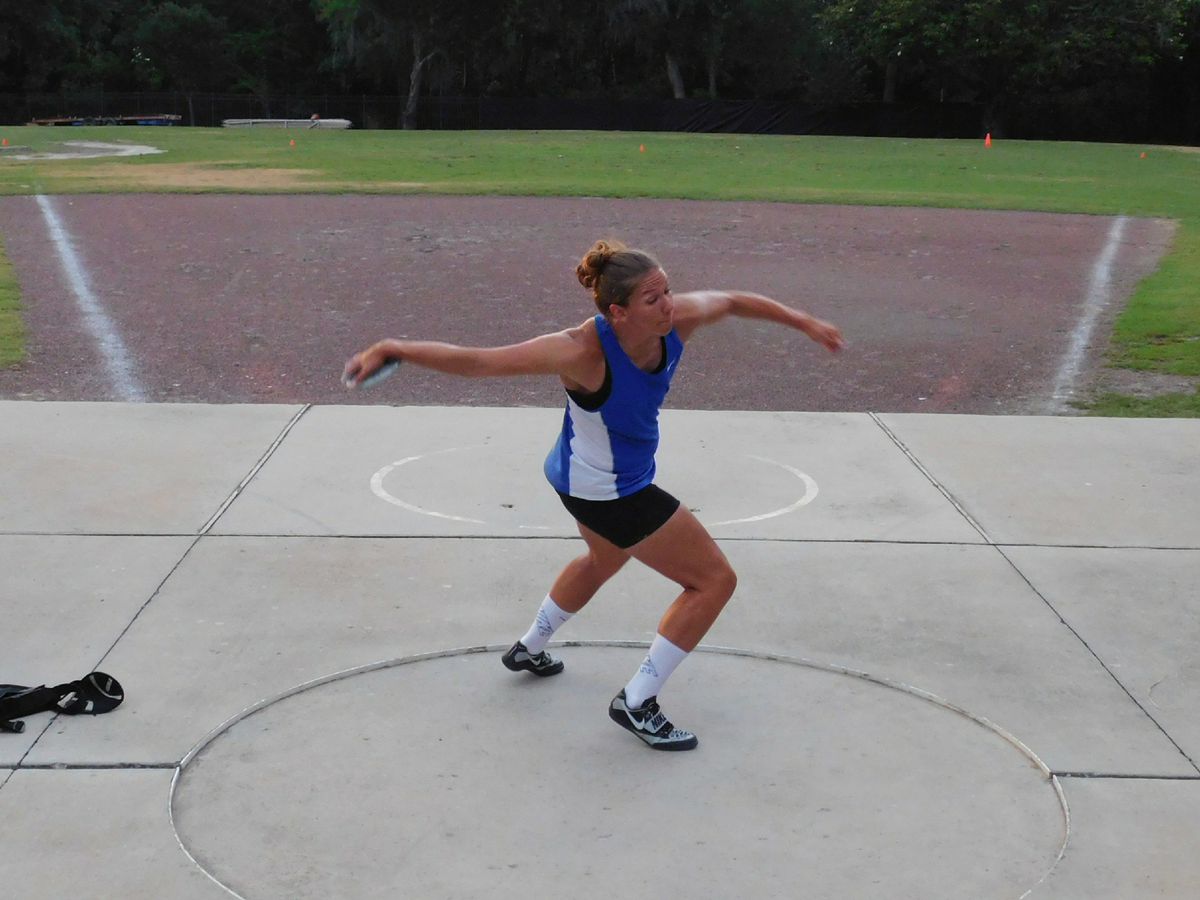 Paige Blackburn trains for discus at the University of Florida Track and Field stadium in Gainesville, Florida. She’ll be throwing the discus in the Olympic Trials. (Photo by Karlee McQuillen)

Paige Blackburn trains for discus at the University of Florida Track and Field stadium in Gainesville, Florida. She’ll be throwing the discus in the Olympic Trials. (Photo by Karlee McQuillen)

When Soldotna's Paige Blackburn consistently unleashed the best training throws of her discus career in February in Florida, her coach Steve Lemke was adamant she quickly locate a meet so she could attain the Olympic qualifying standard.

Blackburn settled on the Power Conference Cardinal and Gold Challenge at the University of Southern California in March. She owned a career-best of 188 feet, 3 inches — that's 57-plus meters. But several 60-meter training throws indicated she had a legitimate shot at the Olympic qualifying standard of 61 meters (200-1).

An anxious Blackburn fouled on three of her first five attempts in Los Angeles, and her best mark was just shy of 58 meters. Only one attempt remained. That's when Lemke got in her grill.

"My coach came over and chewed me out, I mean chewed me out badly, in front of everyone,'' Blackburn said. "He yelled at me. It was needed, though.

"It sounds funny, but it was almost like a de-stresser.''

Blackburn on her final throw promptly delivered a 61.16-meter (200-8) effort that not only crushed her previous best but also exceeded the Olympic qualifying standard. When the discus left her hand, she knew it was the throw of her life.

"You definitely know,'' Blackburn said. "The best throws you ever have in your life feel effortless. On that 61, I really just kind of turned off my brain.''

And now Blackburn, 26, is a legitimate contender in the U.S. Olympic Trials in Eugene, Oregon. She enters Friday's qualifying rounds ranked No. 7 in the country. The top three finishers will head to Rio, provided they have met the Olympic standard.

Lemke, associate head coach at the University of Florida, said he challenged Blackburn that day in Los Angeles because she had just one throw left and "we were past the point of talking technique.''

Lemke sensed Blackburn was pressing, succumbing to a tendency to overanalyze things, so his stern talk aimed to get Blackburn to shut off her brain and trust her training.

"It was just about forgetting about thinking,'' Lemke said. "It was time to get in the ring and do what (Blackburn had) been doing the last month or two in training.''

Blackburn previously competed in both discus and javelin after competing in all the throwing events in her four years at the U.S. Air Force Academy in Colorado Springs, Colorado, where she earned a degree in civil engineering in 2012.

Last year, though, Lemke convinced Blackburn she needed to focus on one event. Blackburn chose discus because she felt she owned more potential in the event, even though she finished 22nd in the javelin at the 2012 Olympic Trials.

Blackburn, a captain in the Air Force, lives and trains in Florida as part of the Air Force's World Class Athlete Program. The 5-foot-11, 185-pounder initially moved to Florida primarily for academic reasons, earning a masters degree in structural engineering. She had considered ending her athletic career after college, but decided she didn't want to look back years later and lament the road not taken.

She connected with Lemke by a fluke of sorts. Blackburn said she was throwing on her own at the University of Florida venue — "Totally trespassing,'' she said — when a facility manager came over and told her to beat it. Blackburn said she explained she was in the Air Force and an active athlete. Turned out the facility manager was a Marine veteran. He suggested she contact Lemke, who had been given a heads-up by then-Air Force associate head coach Scott Irving that Blackburn was headed his way.

Blackburn said Lemke welcomed her and became her coach.

"The University of Florida has totally rolled me up into the team,'' Blackburn said. "There's something good here. I've got a good coach and a good weight-room staff, and they're very supportive.

Blackburn was a two-time state champion in discus and shot put at Soldotna High, but recruiters did not beat a path to her door.

"We had a helluva time getting her recruited out of here,'' said Galen Brantley, Jr., her high school coach. "The only interest was from the Academy.''

Blackburn, who said she considered playing college volleyball at the Division II level, harbored Division I aspirations and coveted an Ivy League-level education. She's not from a military family, but the Air Force Academy seemed like a good fit.

"I thought, 'This will be a major challenge, but it checks all the boxes,' '' Blackburn recalled.

In Colorado Springs, she continued to improve athletically, which sparked her post-collegiate ambitions.

Blackburn's javelin experience at the 2012 Trials allowed her to feel the tension of a high-stakes meet, and to watch how older athletes prepared themselves and approached competition.

She knew it was unlikely she would advance to the finals. Four years later, though, she owns a legitimate shot at qualifying for the Olympics. Her prep coach Brantley gives her a "puncher's chance'' and current coach Lemke considers her a threat.

Blackburn last weekend threw 194-4.25 (59.24 meters) in her final tune-up meet in California. She finished second, less than an inch behind Liz Podominick, the No. 5-ranked discus thrower in the U.S. this season. That result told Blackburn she's ready for the Trials.