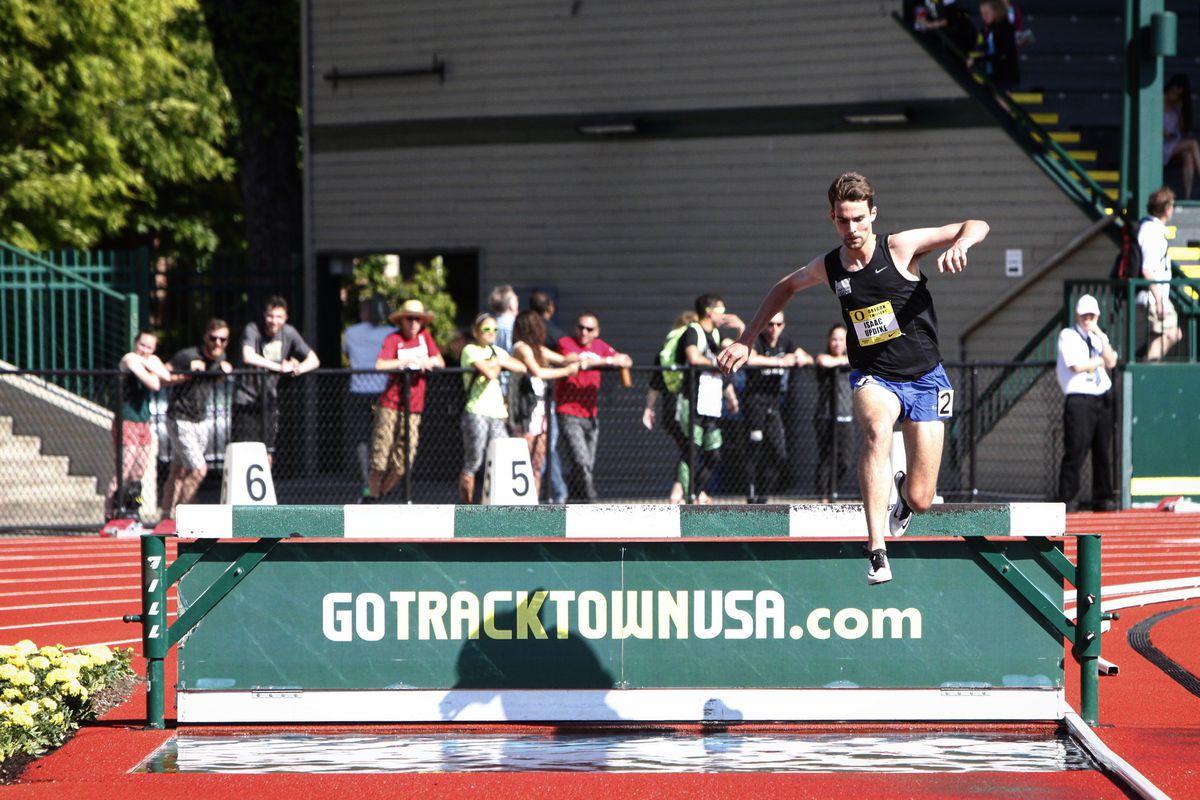 Isaac Updike of Ketchikan leaps over the water pit en route to victory at the Oregon Twilight Meet last month in Eugene.  (Photo by Josh Philips)

Isaac Updike of Ketchikan leaps over the water pit en route to victory at the Oregon Twilight Meet last month in Eugene.  (Photo by Josh Philips)

Isaac Updike grew up an active kid in Ketchikan, where soccer proved his first athletic love. He dabbled in basketball and baseball too. And while he ran cross country and was good enough to finish fourth in the state as a senior, he seldom competed in track because it conflicted with soccer season.

Back then, Updike considered himself more of a soccer player than runner. Still, he knew he possessed a natural gift as a runner.

Updike was uncertain about his future when graduation from high school beckoned in 2010. He liked carpentry, so trade school was an option.

But he also thought it might be worth exploring running in college, so he contacted some schools in Oregon. Most responses were lukewarm, Updike recalled — coaches were skittish because he lacked results on the track, where distances are exact and times are indisputable.

Updike's sister, Bethany, was attending Eastern Oregon University in La Grande, so he emailed Ben Welch, the Mountaineers' longtime cross country and track coach there, and asked if he could walk on — be an athlete without scholarship. Welch, the 1981 Alaska state cross country champion at Wasilla, keeps tabs on Alaska runners as possible recruits. He knew Updike's name and cross-country pedigree, and he told the kid, sure, come down, give it a shot.

Updike became a seven-time All-American for Eastern Oregon, won an NAIA national championship in the 3,000-meter steeplechase and graduated in 2015 with a degree in management and marketing. He decided to keep running at an elite level after college, training with Team Run Eugene in Oregon, and that has turned out terrifically too.

Updike on Monday will compete in the steeplechase preliminaries at the U.S. Olympic Trials in Eugene, Oregon.

Once a midfielder, Updike is becoming a middle-distance marvel.

"He's kind of one of those gifts that drop into your lap and make you look like a genius,'' Welch said. "We make our living off diamonds in the rough. We'll take a flyer on a kid like that pretty regularly.''

Updike, 24, qualified for the Trials on May 20 at the Hoka One One Middle Distance Classic in Los Angeles, where he clocked a personal-record 8 minutes, 31.42 seconds to win his heat and dip under the 8:32.00 qualifying standard for the Trials.

Updike's parents, Karen and Greg, watched the race online at home in Ketchikan.

"We were screaming our heads off,'' Karen Updike recalled. "Well, I was mostly screaming my head off.''

Updike's steeplechase PR continued remarkable improvement this year, when he has slashed 15.58 seconds off his best. He entered 2016 with a PR of 8:47.00, which he ran as a senior in 2015. He lowered that to 8:43.91 in winning at the Oregon Twilight Meet in Eugene by nearly 15 seconds on May 6, and then chopped 12.49 seconds off his standard in Los Angeles.

Updike delivered his Trials qualifier by disregarding the fast early pace set by race leaders, sticking near a Trials-qualifying pace and blistering a 61-second last lap. The steeplechase covers seven-plus laps and requires runners to negotiate a total of 28 barriers and seven water jumps.

"It felt easy. It was weird. That pace I was on felt good so I thought, 'I'll stay here.' I never had any moment when I gritted my teeth.''

Updike's breakthrough did not shock his college coach. Welch felt Updike was in 8:40 shape at the 2015 NAIA nationals in Alabama, where he finished runner-up in a wind-swept 8:47.00 on a day when temperatures rose into the 90s and humidity was stifling.

Welch often sticks his most athletic distance runners in the steeplechase, where agility, balance and coordination are pivotal in hurdling barriers. Besides playing multiple sports growing up, Updike said he grew up jumping over a creek on the family property and jumping over logs and driftwood on beaches, so hurdling came easily to him. He's never fallen while negotiating the water jump in a steeplechase.

Indications of Updike's fitness and athleticism were evident early in his Eastern Oregon career.

As the team ran at a relatively gentle pace, Welch said, Updike began telling teammates a story. The pace accelerated dramatically for about 90 seconds. When the runners returned to a more leisurely pace, Updike immediately continued his story. Updike's new teammates told Welch it looked like the new kid might be a gem.

Welch recalled another story that sold him on Updike's athleticism. A teammate playfully knocked the baseball cap off Updike's head and Updike — soccer guy, remember — used his heel to kick his hat before it hit the ground, and then juggled the hat with his foot a couple more times before using his foot to flick the cap back atop his head.

When teammates called fluke, Updike juggled his hat again and kicked it back atop his head.

"That kid's body awareness, his coordination, is great,'' Welch said.

Updike's teammates on Team Run Eugene include his twin, Lucas, who competed at Eastern Oregon and recently lowered his steeplechase PR to 8:42.87, and Anchorage's Hans Roelle, an 800-meter specialist who was a three-time national champion at Eastern Oregon.

Updike works 20 hours a week for Dick's Sporting Goods as part of its Contender Program. He applied to the program last year, even though he didn't consider himself an Olympic contender.

Yet, here he is — the former small-college walk-on is a contender, the owner of a time that ranks him No. 12 in the country heading into the Trials. His parents and brother will be on hand at the meet to cheer for him.

"Realistically, I want to make it to the finals,'' Updike said. "That's within my power if I have a great day.''