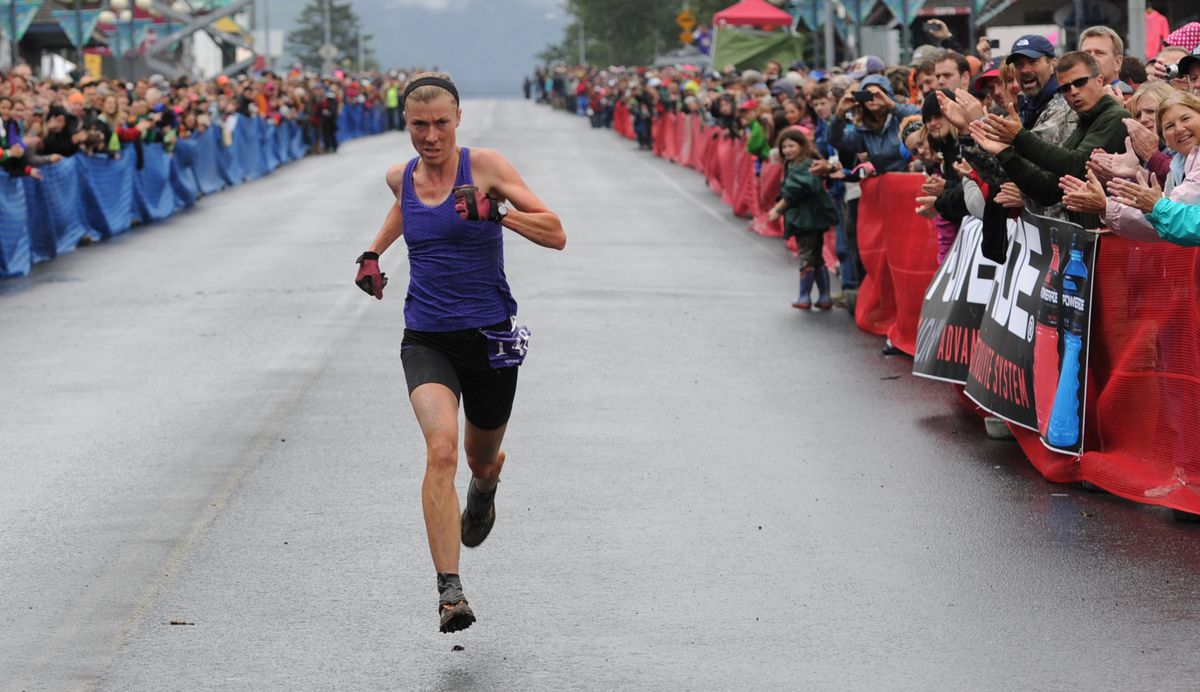 Christy Marvin of Palmer, seen here winning Mount Marathon in her 2013 debut, should be a strong contender in Monday’s 89th edition of the race in Seward. (Erik Hill / ADN archive 2013)

Christy Marvin of Palmer, seen here winning Mount Marathon in her 2013 debut, should be a strong contender in Monday’s 89th edition of the race in Seward. (Erik Hill / ADN archive 2013)

Staying ahead of her mountain-running rivals requires Christy Marvin of Palmer to train diligently, and fortunately she has easy access to training partners who keep her on her toes and hustling in the hills.

Sons Coby, Jeb and Isaac don't hold back when mom's in motion.

It was only last year, Marvin said, that Coby, now 9, was practically sticking to her hip when she ran hill repeats. Jeb (7) and Isaac (4) are pushing the pace harder each year too.

Not many have stayed ahead of Marvin on Mount Marathon in Seward. In three career races she has finished first, second and third. She'll be among the strongest women in Monday's 89th edition of the soul-sapping climb and harrowing descent of the 3,022-foot peak.

"I don't know if I've put together an uphill and a downhill at Mount Marathon in the same race,'' said Marvin, whose personal-best in the race is 52:51. "I feel like I'm fit enough to run a personal record, but whether that all comes together on race day remains to be seen.''

Marvin, who won Mount Marathon in her debut in 2013, finished runner-up to two-time champion Holly Brooks by two seconds in 2014 and took third last year behind two women who broke Nancy Pease's 25-year-old race record of 50:30.

Sweden's Emelie Forsberg, one of the world's best, last year clocked an astounding 47:48 in her Mount Marathon debut, and six-time junior champion Allie Ostrander of Soldotna dropped a 50:28 in her senior-division debut.

"In not very much time at all, I found myself in no-man's land and racing a glorified training run,'' Marvin said.

But Forsberg and Ostrander are not racing Mount Marathon this year. Forsberg is coming back from reconstructive knee surgery and Ostrander, who recently finished her freshman year at Boise State, is running the 5,000 meters at the U.S. Olympic Trials.

Quinn, 36, of Anchorage, who finished fourth at Mount Marathon last year in a personal-best 55:34, expects a strong performance from Marvin.

"She's super, super fit,'' Quinn said. "I think if Christy has a smart race and isn't too much in her head, she'll do great.''

Among her challengers will be another European newcomer. Norwegian rising star Yngvild Kaspersen, who at 21 has already generated impressive results, will make her Mount Marathon debut.

Kaspersen last year finished third in the vertical kilometer race at The Rut in Montana and finished fourth in the 28-kilometer race. She finished one place ahead of Forsberg in each event.

This year she has won the 23K event at the Mont Blanc Marathon in the Alps and won the Zegama-Aizkorri Marathon, part of the Skyrunner World Series, in Spain.

Kaspersen was a member of Norway's Under-19 soccer team before mountain-running became her passion. She has quickly established herself as one of the world's best.

"It's been a surprise to me,'' Kaspersen said. "I'm grateful for the opportunity. I just want to have a good time and enjoy the race.''

Stay-at-home mom Marvin, who buoys herself with family and a strong Christian faith, said she just needs to concern herself with, well, herself.

"I'm just going to be mentally prepared to run my own race,'' she said. "I race best when I'm in my own head.''

Quinn and Denali Strabel, last year's fifth-place finisher in a personal-best 56:17, could be near the front of the race.

Quinn is nursing an ankle injury that has severely limited her training the last three weeks, which is especially frustrating because she feels she was in peak fitness. She said she may have to make a race-day decision whether to compete.

"I really think I've got to be an adult about it and take whatever place I get,'' Quinn said. "It sucks.''

Strabel, 26, is a fan favorite in Seward because she's a hometown girl. She adores the race her mother, Patti, won two times, and her father has raced more than 30 times.

As for Marvin, training gets less complicated for her and her mountain-running husband, Ben, an anesthesiologist, as their boys get older. The couple often trade off training runs — one runs, the other parents. But Marvin is able to get in some training with the boys, who require less hands-on care as they grow up.

"I used to joke, 'How many intervals can you run before someone needs something — whether it's a snack or to go to the bathroom, or whatever?' '' she said.