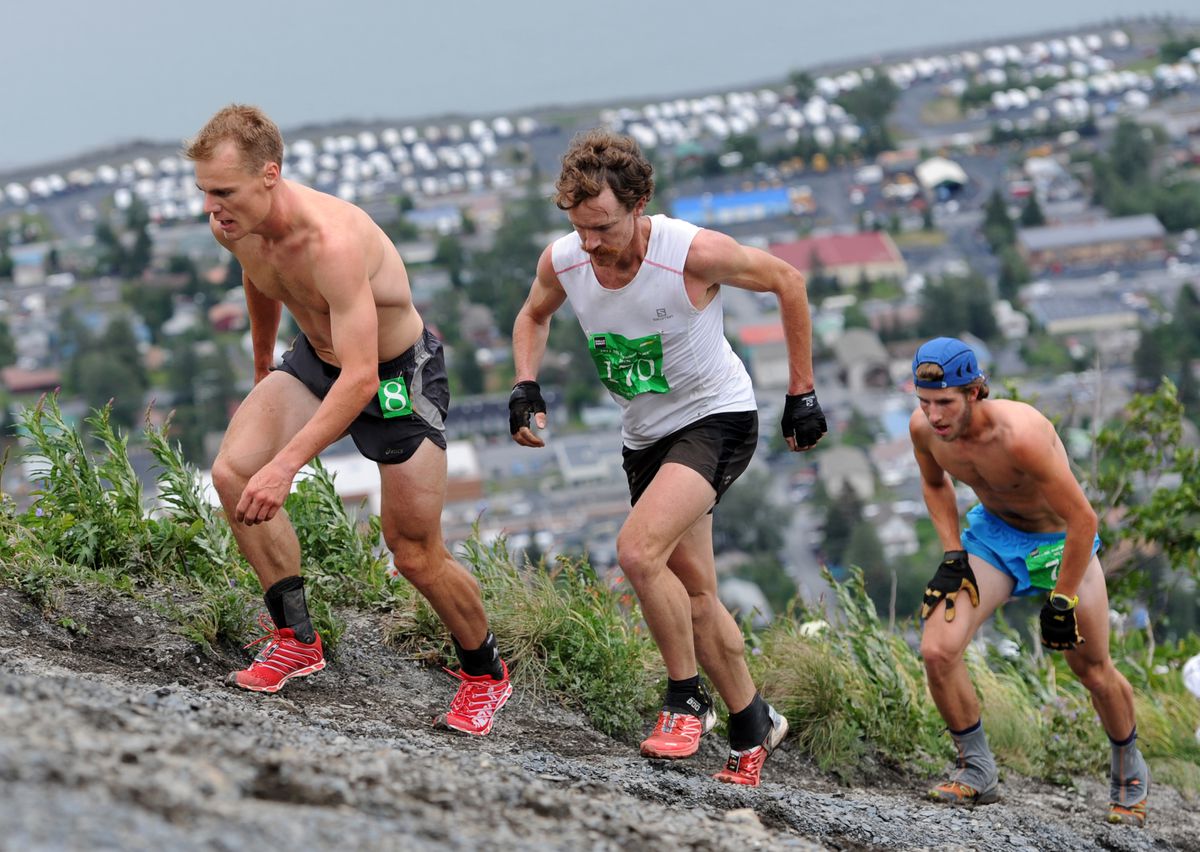 After rookies ruled in men's race at Mount Marathon last year — a first-timer bagged the win and first-timers bagged four of the top seven places — odds are strong newcomers will greatly impact Monday's 89th edition of the iconic race in Seward.

While Jornet isn't back to defend his title — Elson, Shryock and Jensen do return — race veterans peg rookies David Norris and Scott Patterson as threats to win the race that is alternately called Alaska's Super Bowl and Alaska's Olympics and lures thousands of spectators to Seward on Independence Day.

Norris and Patterson, skiers in the powerhouse Alaska Pacific University nordic program, have shined this season. Norris won the uphill-only race on Bird Ridge in record time, nipping Patterson by one second, and Patterson topped Norris to win the climb of Knoya Ridge.

"They are going to be forces to be reckoned with, especially on the uphill,'' Strabel said.

Saari called Norris, 25, and Patterson, 24, the two best climbers in Alaska this summer, then hit on the curiosity he and other elite veterans are musing: "The question is how much they're willing to risk on the downhill,'' he said.

The descent of Mount Marathon is a rocketing plunge down a slope that averages 34 degrees and consists of scree, shale, dirt, a slippery creek bed and, at mountain's base, sketchy cliffs. To negotiate that descent quickly requires fitness, technical skills and no small amount of fearlessness.

Norris and Patterson have ski careers, and World Cup nordic ambitions, to protect.

"I don't know what to expect because of the downhill aspect of the race,'' Norris said. "I assume I'll be able to go uphill pretty well and get in good position to go down as fast as possible, but also play it safe.

"The main thing is ski season.''

"I think there's a good chance if I'm not among the leaders, I won't be far behind,'' he said. "The downhill is the big question mark — how much risk? I can see us trying to pull away (on the climb) to get a little wiggle room for the downhill.''

Rickey Gates should again be a player in all of this. Gates, 35, finished runner-up to his Salomon teammate Jornet last year and runner-up in 2013, when Strabel knocked off Bill Spencer's 32-year-old race record. Gates, a Coloradoan who splits time between his home state and Madison, Wisconsin, owns the No. 3 and No. 4 all-time fastest marks on Mount Marathon.

Gates is an exceptional climber. He led Jornet by one second, and eventual third-place finisher Jim Shine by three seconds, at the top of the mountain last year.

Yet Gates also is dealing with an ankle injury. He said he initially sprained his ankle two months ago and then tweaked it again two weeks ago. Gates said he's been able to train through the injury and hopes his ankle holds up Monday.

Strabel, meanwhile, this season is focused on longer races like Crow Pass, which he has won twice, and The Rut race in Montana. He said longer training runs and less steep climbing have tempered his mountain-racing results. Strabel finished 11th on Bird Ridge and ninth on Knoya Ridge.

"Anyone paying attention to the results knows things are not going the usual for me,'' Strabel said. "There's a saying: 'If you're not winning, you better be learning.' Suffice to say, I've been learning a lot.''

Shine, who finished third last year in the fifth-fastest time in race history, said he hasn't been able to train as much this year.

"Lower expectations than last year, but I'm still going to put it out there and run my hardest,'' Shine said.

Strabel and Saari are among former race champions registered this year. Also returning is 2012 champion Matt Novakovich, the Spartan racing champion who was 14th a year ago, and Trond Flagstad, who won in 2010 and 2008, and sat out last year.

Elson proved equally adept at climbing and descending last year, when he posted the fifth-fastest uphill and fourth-fastest downhill.

Given the climbing credentials of Norris and Patterson this season, it appears strong climbers like Gates and Elson could have new company on the ascent.

Come the downhill, it's anyone's guess how much risk Norris and Patterson will be willing to take to seize a coveted title.

[Robinson, Saari warm up for Mount Marathon with a mountain marathon]