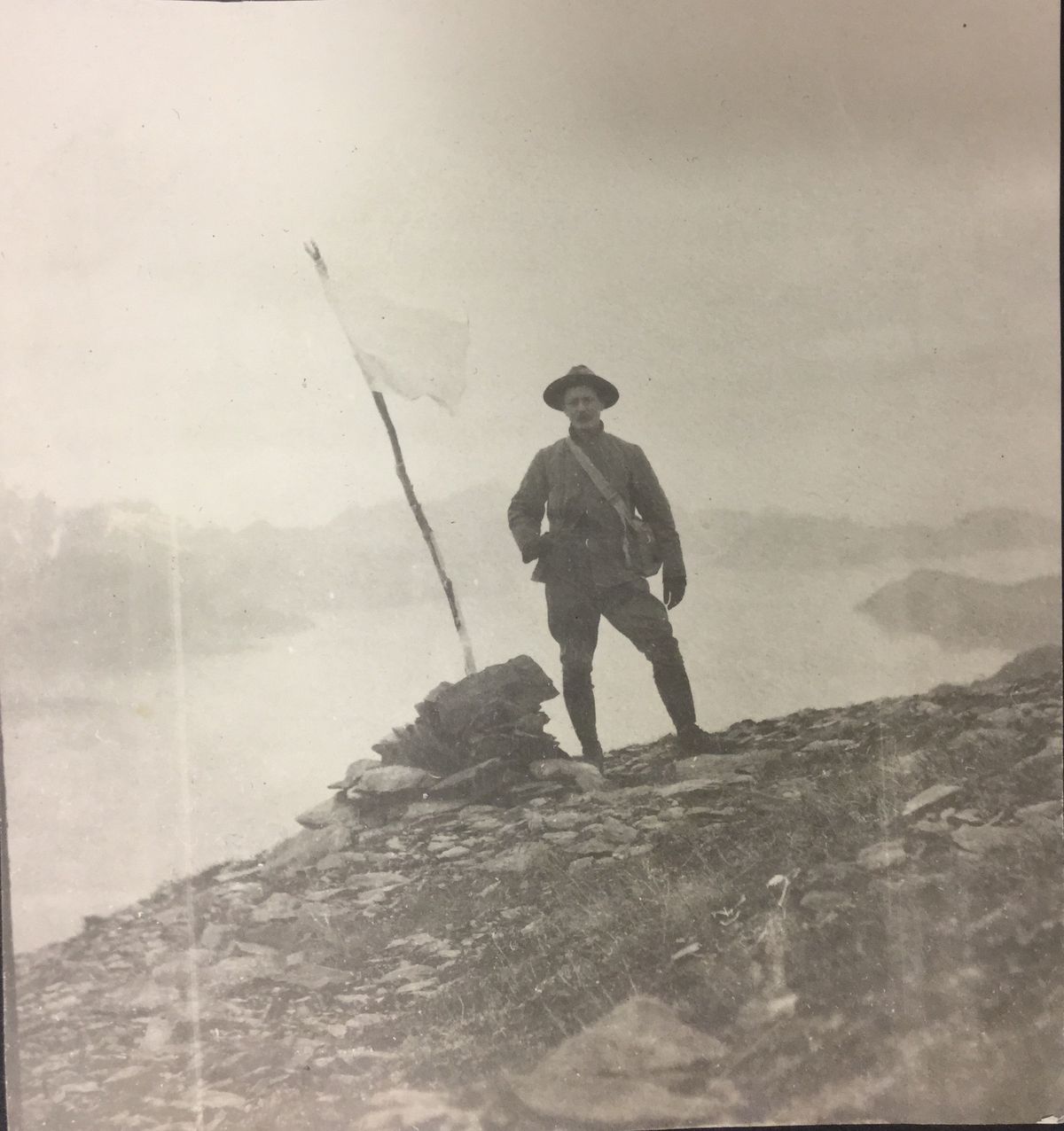 George E. Winter, the auditor for the Alaska Central Railway, stands at Race Point beside a cairn with a flag for a photo taken sometime between 1905 and 1908 when the Winters lived in Seward. It acknowledge the importance of Race Point long before the first official Mount Marathon Race in 1915. (George Winter collection, courtesy of the Resurrection Bay Historical Society)

George E. Winter, the auditor for the Alaska Central Railway, stands at Race Point beside a cairn with a flag for a photo taken sometime between 1905 and 1908 when the Winters lived in Seward. It acknowledge the importance of Race Point long before the first official Mount Marathon Race in 1915. (George Winter collection, courtesy of the Resurrection Bay Historical Society)

As the 1925 Fourth of July approached, some in Seward thought that maybe it was time to run that crazy race again — the one up Lowell Mountain.

The first official race was in 1915. Local legend claims the Mount Marathon Race began as a barroom bet: Could anyone reach the first peak at 3,022 feet and return in less than an hour?

Unofficial sprints probably started years earlier. The peak had often been used as a lookout for ships entering Resurrection Bay, even after cable communication connected Seward to the outside world in 1905. The wires could tell Seward when a ship left Cordova or Valdez, but once at sea, no one knew exactly when it would get into port. The early races were probably dashes down the mountain to see who could be the first to announce a vessel's arrival.

In 1915, James Walters won the first official race in 62 minutes, enticing some to try to break an hour. Alec Bolan did that the next year with a time of 55:12.

For the next five years, there was no race. When it was resurrected in 1925, fans were riveted and the city realized the race could become the centerpiece of its Fourth of July celebration.

Early that summer, President Calvin Coolidge declared July 4 as National Defense Day, or as some preferred to call it, Defense Test Day. He wanted to know how fast volunteers could be mustered for war duty and hoped to open a discussion about preparedness.

Patriotic fervor had been strong during World War I in Seward, which had one of the most active Red Cross organizations in Alaska and formed an American Legion post shortly after the organization was founded in 1919.

By 1925, business was booming. The Alaska Railroad had been completed in 1923, connecting Seward and the Gulf of Alaska to Anchorage and the Interior. Standard Oil had come to service the Port of Seward, and 25 men were building the $100,000 Jesse Lee Home orphanage. Seward touted the Kenai Peninsula as an ideal location to for businesses, homesteaders, farmers and ranchers.

‘Seward is going to celebrate’

The Fourth of July fell on a Saturday that year, providing a weekend of opportunity for a town teeming with patriotism and economic growth.

"You can't go wrong in spending the glorious 4th in Seward," promised an ad in the Seward Gateway. "Bring the family. Ample accommodations."

The S.S. Northwestern was scheduled to be in port with nearly 100 passengers that weekend, and the town expected many more to come in from the canneries and outlying districts. Extra accommodations for at least 40 had been arranged in case the hotels filled up.

"This is one day Seward is going to CELEBRATE – WHOW!!!," the newspaper shouted.

Since 1915, the race up what later became Mount Marathon had been an off-and-on Fourth of July happening – but not the day's main event.

The baseball games the town played against Valdez, Cordova, Anchorage and visiting ship crews usually took top billing. Sometimes only three and no more than eight competitors, all from Seward, entered the race. It wasn't until after World War II that Mount Marathon became an annual event.

But in 1925, the 10th anniversary of the inaugural race, a new vision of the race's potential importance to Seward emerged.

"Local stores report a good sale in field and spy glasses," the Seward Gateway reported in the days leading up to the holiday. "Each day, at all hours, it is a common sight nowadays to note a group of people standing along the street, gazing aloft on old Marathon, watching some speedy racer either scaling its face or coming down like a sure-footed mountain goat, making gigantic leaps on the downward journey.

"… The public will be able to watch the racers speeding up the mountain side," the newspaper promised, "from almost any point in the city."

Seward's baseball team had been practicing all week, delighted that the infield was in better condition with "many of the humps leveled out." Coach Rood, who had trained under Gill Dobie of the University of Washington, pushed his players hard. "The lads eat that stuff up," the newspaper noted.

The local fire department opened a store carrying novelties and fireworks, "mostly of a small and harmless nature." Ellsworth's Store, Brown and Hawkins and Seward Drug had gone all out with their patriotic window decorations.

"SEWARD READY TO ACT AS HOST FOR 4TH VISITORS" the local newspaper headline bragged on July 3. A double-page spread revealed the next day's schedule, and printed programs were distributed courtesy of the Liberty Theatre.

Events would begin with a 6 a.m. gun salute by Spanish-American War veterans. A bathing beauty contest and swimming races were planned, and the town eagerly awaited the arrival of beauties and swimmers on the Alaska Railroad passenger train and the S.S. Northwestern. The Odd Fellows would hold a dance in the evening.

A parade, a game … and the race

The next day proved to be the best day of the summer. "Not a cloud was in the sky," the Seward Gateway reported.

An unexpected salute fired off by the S.S. Northwestern when it docked that morning woke those up who hadn't yet stirred. The parade started at 10:30 that morning. The Seward Drum Corps headed the parade, followed by the mayor's son, Lee Ray, dressed as Uncle Sam, and the banker's daughter, Betty Balderston, dressed as America. Seward's first twins, the Stotkos, followed. All of the town's children came next, riding in floats or marching while waving little flags. Members of the U.S. Signal Corps strutted in uniform behind them.

The parade ended at a stage set up by the entrance steps to the Bank of Seward at the corner of Main and Adams Street. The children sang "America," followed by an invocation and more songs. Seward Mayor L.V. Ray gave a brief speech and introduced Alaska Sen. Anthony J. Dimond from Valdez. The children sang the "Star Spangled Banner" as the program ended, and everybody took a hour for lunch.

At 1 p.m., foot, bicycle and swimming races began. The baseball game started at 3 p.m. in front of an excited crowd wondering which team would win the $100 prize.

Prizes of $100, $50 and $25 awaited the first three runners in the mountain race. At 6:30 p.m., the starter's gun sent five brave souls dashing up Main Street from the corner of Adams Street. They soon turned left at Lowell Creek (now Jefferson Street) as spectators cheered and prepared to focus their binoculars.

Eric Eckman, a 25-year-old called the "Finn," took the lead and seemed in control. Ed Vogel (or Vogl, according to some accounts) probably came right behind, followed by 40-year-old Alec Bolan. Few expected Bolan to win, even though he was first to break one hour and held two records: one for his 1916 run of 54:12 and another for best time to the top. Martin Killian and a man nicknamed "Yakima Jacks" took up the rear.

Eckman reached the peak two minutes ahead of everyone else. Vogel pushed on behind him. Somewhere on the way down, Eckman fell when he tried to avoid a small child who jumped in front of him. That delay was enough for Vogel to overtake him, and as the two reached the foot of the mountain, Vogel led by about 10 seconds.

"Ed Vogl flashed across the tape," the Seward Gateway reported, "apparently in splendid shape, running with long strides and breathing easily. He trotted off from the judges' stand heading for a shower. He had a few scratches on him, but it was Eckman who appeared to be slightly in distress as he breezed across the finish line 10 seconds after Vogl."

Record-holder Bolan came in third at 60:55 "running easily and outwardly in the best shape of all." Yakima Jacks finished fourth in 84:04 and Killian was fifth in 86 minutes flat – both runners finishing "in fine shape, not much worse off for making the grueling climb against time," the newspaper said.

From undercard to main event

To the surprise of the holiday's organizers, the Mount Marathon race had not only been a success, it had surpassed all of the other events in spectator interest.

"This race held the attention of everyone," the newspaper reported, "from the crack of the starter's gun to the last, when the fifth man came running in heavily, but swiftly."

For perhaps the first time in the history of any Seward Fourth of July celebration, the baseball game wasn't the day's biggest event.

"Seward whitewashed the Standard Oil nine by the big score of 17 to 0," the newspaper reported. Both team captains and the umpires agreed to stop the game in the sixth inning to give spectators enough time to have supper before viewing the race.

On July 6, the newspaper ran an editorial headlined "WE ARE PROUD OF SEWARD." The Fourth of July had been a great success, "one to be long remembered by the many visitors to Seward and its citizens."

The dismal baseball game followed by the exciting mountain race convinced some that "it might be a good thing to make the race an annual event, and the principal feature on the day's program," the newspaper said.

By cutting other prize monies, the town could create a larger purse for the race to "bring runners from other parts of the Territory." By advertising a month early, Seward might entice tourists from Seattle to come watch the distinctive race.

"You have the best field for such an event I have ever seen," one tourist told the newspaper. "I sat on the hotel porch and saw the whole race in comfort, without moving from my chair…it is one of the best assets the city has to offer."

Although the Mount Marathon Race faced some difficulties in the coming years, with no race held during a seven-year stretch in the 1930s, the seed was planted on July 4, 1925.

Today the race is known throughout the world and attracts hundreds of runners, including some of the world's best athletes, and thousands of spectators.

Doug Capra is a writer and historian who lives in Seward. He is the author of "The Spaces Between: Stories from the Kenai Mountains to the Kenai Fjords." Accounts of the 1925 Fourth of July celebration came from the Seward Gateway and from Resurrection Bay Historical Society archives. A longer version of this story appeared in the Seward City News.

Doug Capra is a freelance writer from Seward.