On day of personal records, Marvin crushes hers to win Mount Marathon 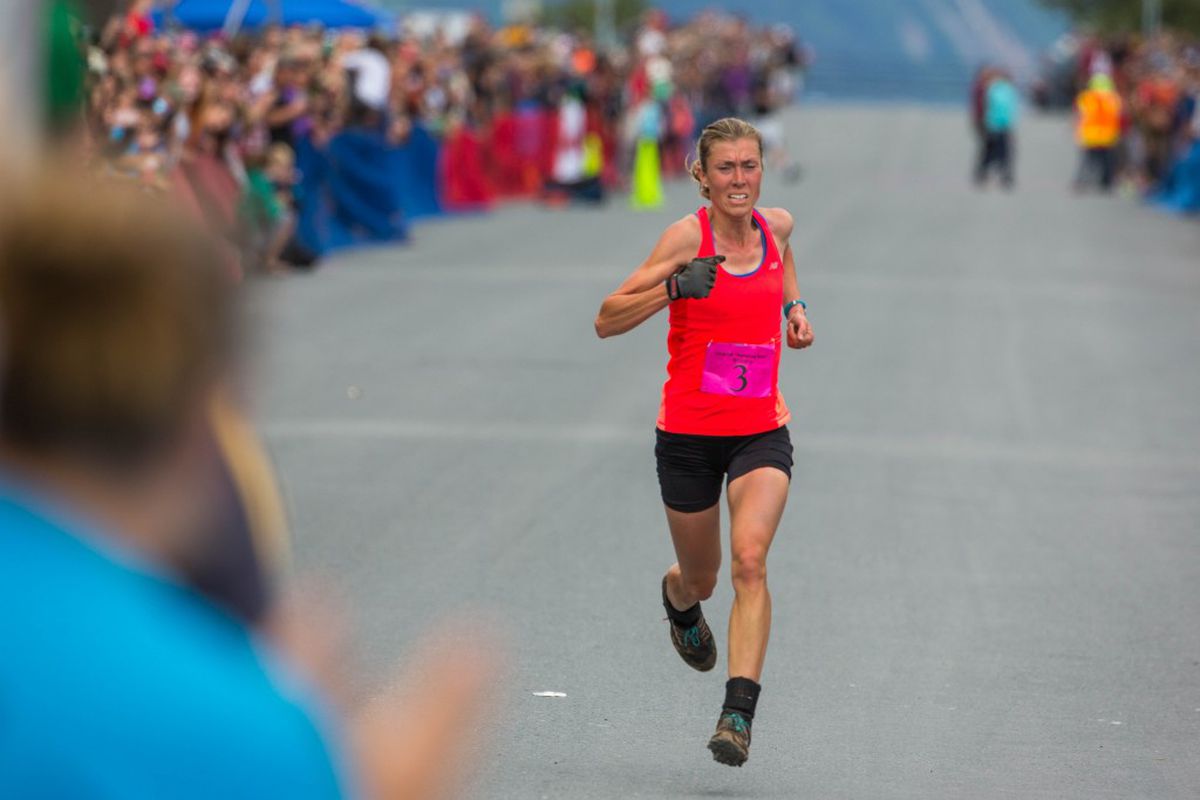 Christy Marvin pushes into the finish during the annual Mount Marathon Race in Seward on Monday, July 4, 2016. Marvin won the race for the second time. (Loren Holmes / Alaska Dispatch News)

Christy Marvin pushes into the finish during the annual Mount Marathon Race in Seward on Monday, July 4, 2016. Marvin won the race for the second time. (Loren Holmes / Alaska Dispatch News)

SEWARD — The women were ready for prime time Monday at Mount Marathon.

Led by two-time champion Christy Marvin of Palmer, six of the eight top finishers recorded personal bests on a day that marked the first time the women's race replaced the men's race in the showcase afternoon timeslot.

It was a jubilant finish chute as the leaders poured in.

"I'm never one to celebrate," said Marvin, 35. "I don't raise my arms and stuff, but today it felt like all of Alaska was cheering. I could feel the energy and the love and I couldn't help celebrating.

Combined with a record-setting victory in the men's race by David Norris of Fairbanks, Marvin's win completed an Alaska sweep of the men's and women's title.

Last year, a pair of professional mountain runners from Europe — Kilian Jornet of Spain and Emelie Forsberg of Sweden —  swept the titles in record-setting fashion.

Marvin didn't approach Forsberg's record of 47 minutes, 48 seconds, but her time of 51:02 was the fifth-fastest women's time since women began running Mount Marathon in 1963.

Marvin, who earned her second victory in four tries and her first since her rookie race in 2013, shaved 1:49 off her previous best to claim a runaway victory.

Yngvild Kaspersen of Norway, a professional runner making her Mount Marathon debut, held off challenges by third-place Denali Foldager-Strabel of Seward and fourth-place Najeeby Quinn of Anchorage to grab second place in 53:25.

Kaspersen, 21, was passed by Quinn, 36, near the cliffs in the treacherous run down the 3,022-foot mountain but was able to quickly regain second place. Foldager-Strabel, 26, passed Quinn and caught up to Kaspersen shortly after that.

"But she had another gear," Foldager-Strabel said.

Foldager-Strabel was ecstatic with her 53:40 finish, which trimmed more than three minutes off her previous best of 56:17.

She passed a couple of runners with a blistering downhill, surprising many who weren't expecting her to come off the mountain so soon.

Holly Brooks, a two-time champion who provided analysis for live-television coverage of the race, told Foldager-Strabel she was surprised to see her come off the mountain in third place.

"Where the hell did she come from?" Brooks said, recalling her reaction.

Foldager-Strabel is so proud of her Seward and Mount Marathon roots that when she enters the race, she uses a hyphenated name, so folks know she's a Foldager and a Seward runner. Otherwise she goes by Denali Strabel (whose husband, three-time Mount Marathon champion Eric Strabel, also placed third Monday).

Foldager-Strabel is a proven road racer — she ran Division II track and cross country in college and won this year's Alaska Run for Women — and so once she hit the pavement for the final few hundred meters, her third-place finish was secure.

"When I hit the Suds N Swirl corner I saw all of my Seward crew and everyone was like, 'Whoa!' " she said of the Third Avenue laundromat that runners pass on their way to the finish line.

As she drew closer to the finish line, Foldager-Strabel's eyes were glued to the clock to see if she had a chance at beating her mom's PR of 53:22. She missed it by 18 seconds.

Quinn wasn't sure if an ankle injury would allow her to run Monday, but she said she felt good on training runs leading up to the race.

She was sturdy enough to finish in 54:07, beating her previous best by 87 seconds.

"Proud. Just proud," Quinn said. "I wanted this to be a go-out-with-a-bang year, because I was thinking I don't know whether I'll do this again.

"But now I know I'll be back next year."

Quinn said she wasn't surprised her lead over Kaspersen was brief, or that Foldager-Strabel was able to run her down.

"Oh yeah, that's a 21-year-old. And I know little Miss Hot Pants is strong on the pavement," she said first of Kaspersen and then of Foldager-Strabel, who wore a stars-and-stripes jog bra and shorts that could pass as hot pants.

As for Marvin, Quinn said she was proud of her occasional training partner.

As it turned out, Marvin set such a furious pace she didn't need to worry about what Kaspersen or anyone else was doing.

She beat Kaspersen to the top of the mountain by 1:40, and added to her lead on the downhill.

Marvin had previously said that she was eager for the day when she was strong on both the uphill and the downhill on Mount Marathon, and Monday was that day.

Marvin said she wanted to run her own race and not let Kaspersen take her out of that mindset. At the same time, she was interested to see if she could keep pace with the Norwegian given the opportunity.

"Sometimes you either rise to the level of your competition or you fall," she said. "I really thought that (Kaspersen) was out of my league and I thought if she was ever near me I really wanted to race with her and compete with her.

"I ended up having to run my own race anyway," she said, because she put such a big gap between herself and Kaspersen. "And I didn't expect that."

Marvin said she got a prerace boost from husband Ben Marvin, who placed eighth in the men's race thanks to a screaming downhill run that led to time of 46:14, a personal best by 23 seconds.

"That was some super-positive energy," she said, noting that three generations of her family competed — her 9-year-old son, Coby Marvin, who PR'd by four minutes in the junior race, and her dad, Dan Virgin.

Foldager-Strabel said she was a little dismayed by prerace talk about who wasn't in this year's race — Forsberg and Allie Ostrander of Soldotna, last year's runner-up who also eclipsed the women's record. Ostrander didn't return because she's racing the 5,000 meters later this week at the U.S. Olympic Track and Field Trials in Oregon.

"We're here," Foldager-Strabel said, "and we're getting filmed (for television), so let's give them a show.

"Any little girls out there watching, I hope we inspired them."