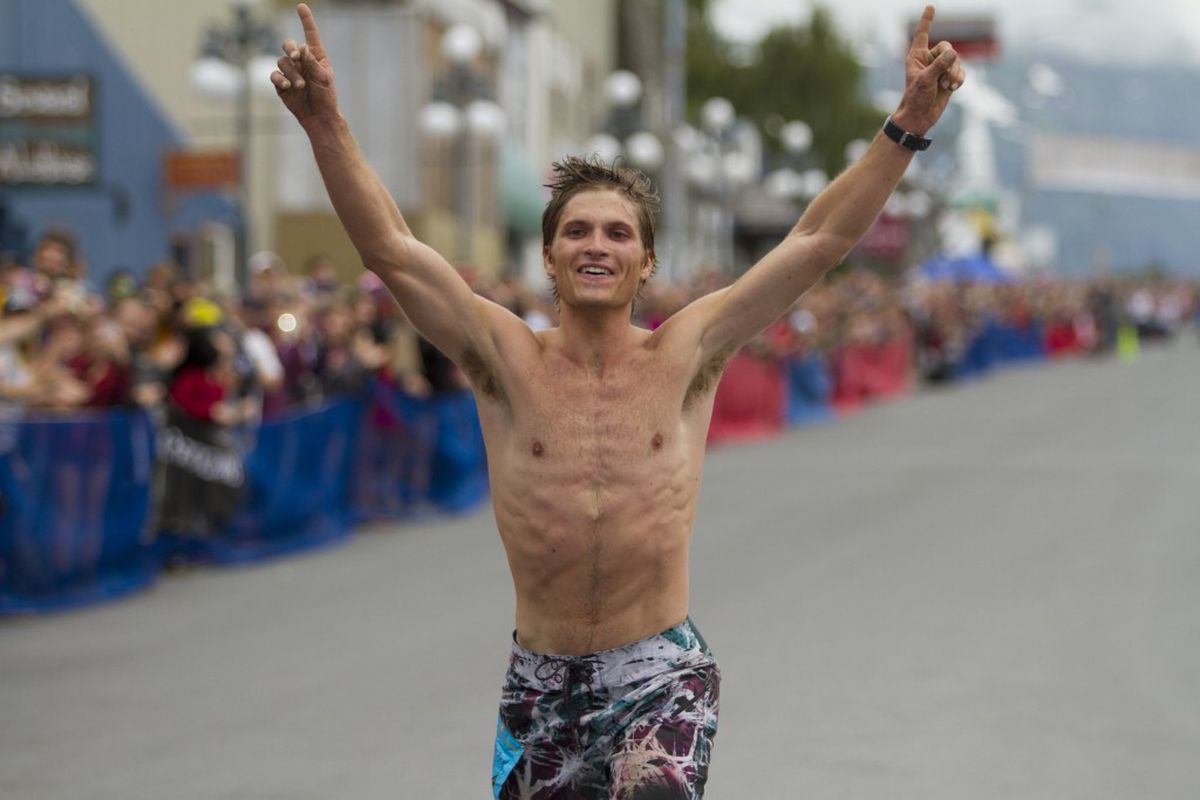 SEWARD — In a span of 41 minutes and 26 seconds Monday, David Norris became an Alaska hero.

The 25-year-old Fairbanks skier put Alaska back on top of the state's most famous footrace by demolishing the Mount Marathon record set last year by a professional mountain runner from Spain.

Norris, a race rookie, won the 89th running of the race up and down this city's fabled 3,022-foot peak with a powerful uphill climb and a swift but controlled downhill run.

He became the third man in four years to break the record, a startling series of events considering the record of 43:21 set by Indian's Bill Spencer stood from 1981 to 2013.

Eric Strabel of Anchorage finally took down Spencer's mark in 2013 by running 42:55, and Spain's Kilian Jornet lowered the record to 41:48 a year ago.

"Everything just worked out," a smiling Norris said in the finish chute. "I felt really good on the uphill, so I gave myself a good buffer."

Norris made it to the top of the mountain in 30:31 — about a minute faster than Jornet's time to the top last year.

Though Jornet earned huge respect for his domination on the mountain last year, people were clearly thrilled to see the record reclaimed by an Alaskan.

"Way to bring it back, dude!" 2012 champion Matt Novakovich of Anchorage told Norris in the finish chute.

Claiming second place in 43:06 was Nick Elson of Squamish, British Columbia, who placed fifth in his debut a year ago. His performance Monday ranks as the sixth fastest in Mount Marathon history and was 40 seconds faster than his time last year.

Third place went to three-time champion Strabel, whose rocket-fast speed on the downhill carried him to the finish line in 44:19.

The victory marked the second time this year that Norris earned a huge ovation while racing the final stretch on his way to a coveted title. In February, he won the 51-kilometer American Birkebeiner ski race in Wisconsin, drawing cheers from thousands of spectators.

He was the recipient of applause and adulation again Monday.

A huge crowd awaited his arrival at the bottom of the mountain, and thousands of fans lined the city streets to cheer him on as he ran from the mountain to the finish line.

"You can't even hear yourself breathe," he said, the same thing he said after winning the Birkie.

Norris is a member of the Alaska Pacific University nordic ski team, and he credited his Mount Marathon win to his ski training.

"Ski training is tremendous preparation for this," he said.

Skiers build amazing aerobic capacity and strong legs, both of which serve them well on Mount Marathon, which rewards both of those things. Skiers have long set the pace on the mountain — Spencer and Strabel were both elite-level skiers, and nine-time women's champion Nina Kemppel was a four-time Olympic skier.

Anchorage's Scott Patterson, who trains with Norris on the APU team, was the second runner to the top on Monday. He was more than a minute behind Norris but made the turnaround in a very respectable 31:52.

But things went sideways on the hair-raising downhill, which has an average slope of 34 degrees.

"I fell four times and twisted my ankle 10 times, so I shut it down."

His consolation was seeing his teammate put the race record back in an Alaskan's hands.

"It's sweet that David got the record," Patterson said. "It really needs to be an Alaskan record."

Norris said he never thought much about racing Mount Marathon. When he won last year's all-uphill Alyeska Mountain Run, a 2-mile race up the north face of Alyeska, he earned an automatic entry in Mount Marathon.

Last month he set a record in the uphill-only race on Bird Ridge, so there was no question about his climbing credentials.

It was his downhill that was in doubt — not so much whether he could run fast downhill, but whether he would be able to let it fly on the dangerous trip down, knowing a miscue could compromise his ski season.

"I pushed it as hard as I could," Norris said. "It seems like there's a cutoff line of going fast and (too fast)."

Matias Saari, the 2009 champion who urged Norris to sign up for race, said Norris was a true Mount Marathon rookie.

"Lining up today David asked me, 'What should I do on the snow?' And I thought, 'You haven't figured that out yet?' " Saari said.

Most runners slid down a snowfield that Elson said stretched for a couple hundred meters. Some finished with rosy cheeks, and not on their faces.

Conditions were ideal — overcast but not rainy and neither hot nor cold. Fog rolled in and out at the top of the mountain, and the trail was reported as dry and solid.

But even in good conditions Mount Marathon is perilous. Yet runners love it, as evidenced by the amount some pay to get into the limited-entry race. At Sunday night's auction, where runners who didn't get into the race via the lottery, 10 men's and women's bibs were up for grabs, Ross paid $2,100 for one and Will Serra paid $4,500 for another.

Judging by their moods in the finish chute, it was worth it. Ross placed 17th in his rookie run and Serra slashed four minutes off his personal best.

Elson, the Canadian, said he came back for a second straight year because there's no other race like Mount Marathon.

"It's unique," he said. "It's the atmosphere, the history, the competition and just how gnarly it is.

"There's not any other place you could get away with holding a race like this."

With origins tracing to a bar bet, Mount Marathon was first held in 1915. Its lore has spread far beyond Alaska in recent years, so much so that professional runners like Jornet of Spain and Gates of Wisconsin want to run it.

Toss them into a mix of hard-training and talented Alaska runners, and Mount Marathon's once-unapproachable men's record didn't have a chance.

"It's attracting worldwide attention. Everybody good wants to be here," said race veteran Barney Griffith of Anchorage. "It's no longer a local race."

By slicing 22 seconds off Jornet's record, Norris made himself a very popular man for putting an Alaskan back on top of the Mount Marathon record book.

"It matters to Alaskans big-time," Griffith said. "I didn't know if an Alaskan would ever bring that (record) back.

— More than 20 years after a downer debut, Jerry Ross hopes to give Mount Marathon another try