Tanaka has taught generations of karate students in Anchorage 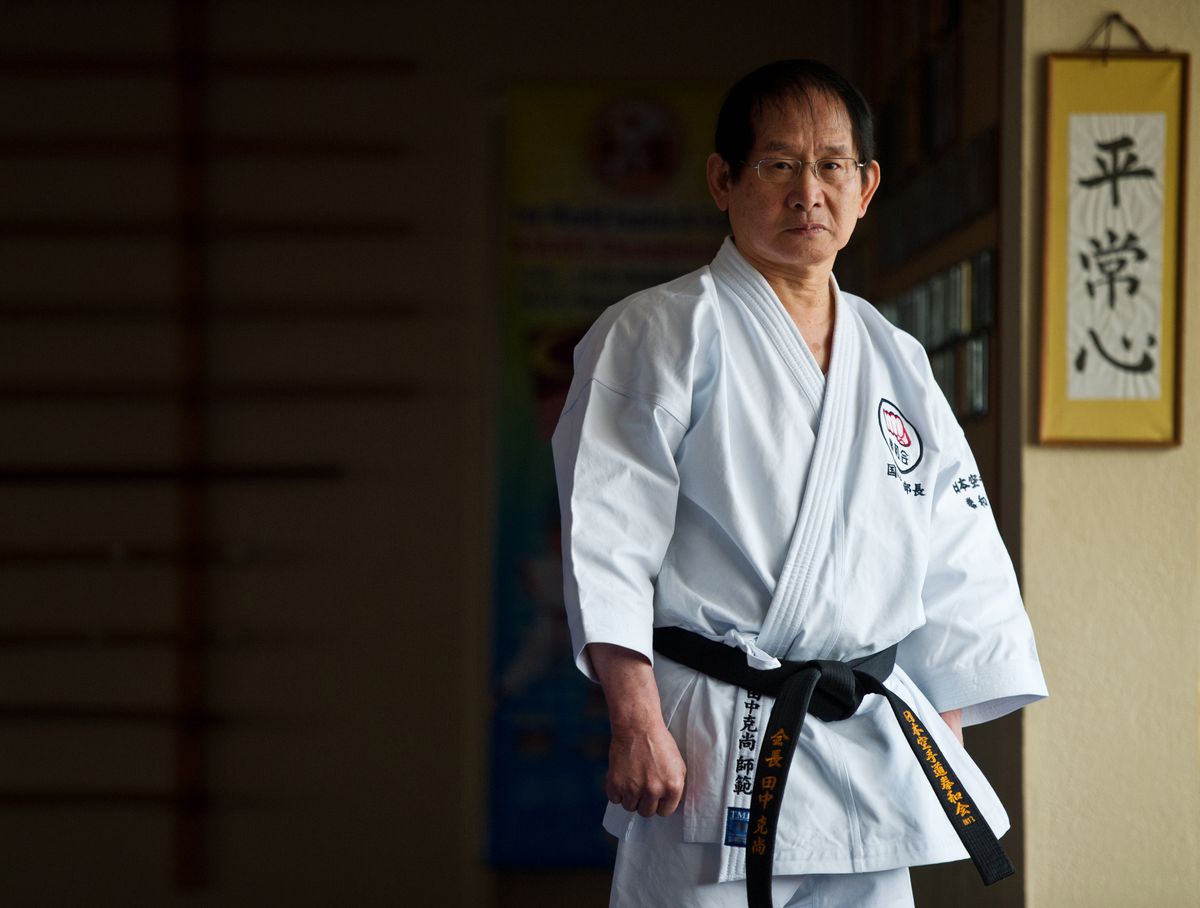 Sensei Katsutaka Tanaka has been teaching karate in Alaska since moving here from Japan in 1969. He’s the founder and chief instructor of Tanaka’s Martial Arts Academy in Midtown. (Marc Lester / Alaska Dispatch News)

Sensei Katsutaka Tanaka has been teaching karate in Alaska since moving here from Japan in 1969. He’s the founder and chief instructor of Tanaka’s Martial Arts Academy in Midtown. (Marc Lester / Alaska Dispatch News)

It's the end of a karate class and Katsutaka Tanaka isn't quite done teaching.

He asks his students, all of them little kids, to repeat his closing words:

"Karate is for defense only. We must exercise manners, respect and self-discipline. Anger is your enemy. When you're angry, your body makes mistakes."

Good manners, respect and self-discipline. Those are the three core values Tanaka has been teaching at his Anchorage dojo — Tanaka's Martial Arts Academy — for 47 years.

The number of students who have come through Tanaka's Martial Arts Academy over nearly half a century easily reaches the thousands. They know him by Sensei Tanaka, a title often given to martial arts instructors.

Vassar Louie-Bradford has called Tanaka "sensei" for more than 20 years. He said Tanaka is a stern teacher capable of inspiring greatness.

"It was just a completely different mindset and world in his karate school compared to going to normal school or anything else," he said. "You almost have this weird expectation of yourself (to) get better and get his acknowledgment, because he's a man who rarely gives out compliments.

"He wants you to always try to do better."

Man of many talents

Tanaka, a 69-year-old native of Toyota City, Japan, has been an instructor in Anchorage ever since 1969, when he started teaching the Japanese martial art form at Alaska Methodist University, now Alaska Pacific University. At the time he didn't know a lick of English.

He has coached a world champion and become the highest-licensed referee in the Western Hemisphere.

He's been on magazines and TV shows, earned three college degrees and holds a ninth-degree black belt — the "Ph.D. of Ph.D.s" in the karate world.

He can pulp a tree with one swift strike of the fist.

He's even been in a movie.

The karate guru said he gets messages from people around the world wanting to learn from him, and he often wishes he had ended up in a bigger city, which would have potentially led to even bigger things in the karate world.

But Tanaka stayed in Anchorage, even turning down Hollywood movie opportunities because he didn't want to leave his students in his little dojo on Fairbanks Street.

"How many people did five nice things today?" Tanaka asked at the start of a beginner's karate class.

Three or four little hands quickly shot into the air. A 7-year-old girl explained how she had helped her family make breakfast and helped her father with his "papers."

"Everyone belongs to a team," Tanaka told the children. "It's called family. When you grow up, help your parents."

Tanaka is not afraid to speak his mind when he knows a student isn't trying his or her best.

"You're lazy. It's the truth," Tanaka told one student as the class ran short laps around the room.

"If you don't want me to call you a lazy person, show me you're not."

Tanaka said he's hard on his students because he knows if they raise their standards, it will become habit and carry over into other areas of life.

He keeps an honor roll for straight-A students. The list serves as encouragement and an example of the good habits his students are forming.

Tanaka said he always had high standards for himself — even when he was young — but he never considered himself smarter than anyone else.

His teachers did though. In junior high, they often made him teach the classes while they graded papers. Tanaka was barely a teenager at the time.

When he was 14, Tanaka channeled his efforts and mind into a newfound passion — karate.

He took to it quickly, earning his first black belt by 18. By 19, he was the captain of the Nagoya-Gakuin University's karate team — a position usually held by seniors, not sophomores.

"Kats," as his friends called him at the time, was a born leader. And he wasn't fond of the Nagoya-Gakuin University karate team's loser reputation.

"We were terrible. Terrible," Tanaka said. "And nobody respected our university karate team back then. So I said, 'Alright, guys, this is what I'm going to plan to do: I'm gonna make this university team one of the best in Central Japan.'

"So I said, 'Alright, some of you might become the victim on the way to get there. So we're going to practice very hard and I'd like you to be prepared.' ''

Soon, he said, opponents changed their opinion of the team.

"(E)verybody started thinking, 'Those guys are tough,' '' he said.

'This is not for thuggery'

It was at Nagoya-Gakuin that Tanaka met Roger Lewis of Anchorage, who was an exchange student from AMU in the 1960s.

He took some karate classes from Tanaka and the two became friends.

One time, Lewis said, a group of students were attempting to toughen their hands by repeatedly hitting a post tacked to a tree. The tree's trunk was about 5 inches thick.

Tanaka walked up and punched the post. All of the leaves fell off the tree, Lewis said, and the tree started to lean.

"So a couple guys went over and kicked it down and there was sawdust inside," Lewis said. "He had pulped it. He had pulped the — damn tree."

Louie-Bradford said one time, Tanaka was asked to perform a weapons demonstration at the U.S.A. Open tournament in Las Vegas despite being one of the oldest referees at the event. They were amazed by his speed.

"Everyone couldn't stop talking about it because of just how fast he was," Louie-Bradford said. "Everyone knew he was one of the oldest adult referees that we have, and (he) was moving like he's 25.

"They were blown away by that."

Tanaka's strength and skill is formidable, but he believes karate is about self-control and self-discipline, not aggression.

"(He could) just reach up and tap you on the chest and leave a bruise," Lewis said. "But he made it very clear, this is not for thuggery. If you actually get in a fight, you failed and you better get back in the dojo and make yourself better."

Because of his friendship with Lewis and the exchange program connection between AMU and Nagoya-Gakuin, Tanaka was offered a chance to come to Alaska as an exchange instructor in 1969 after he completed his degree in economics in Japan.

Tanaka didn't know much English. But he decided to make the leap across the Pacific Ocean.

When he arrived in Anchorage, his classes immediately became popular. Everyone wanted to take classes from the new karate master from Japan.

"He started off by being very clever — doing protection classes for women, and they were very popular," said Lewis, now 76. "And he built it up very quick."

But Tanaka quickly realized his English language skills weren't up to par.

"I thought, 'This is not fair to my students,' so I decided I'm gonna take college classes and so I'm going to improve my English language so I can explain to them," Tanaka said. "But my first year, I didn't understand anything. Zero."

Tanaka started by translating every page of his textbooks into Japanese, but since it took three hours to translate a single page, that quickly became an impossible task. So he got another idea.

Tanaka said his first seven and a half years in Anchorage were the hardest years of his life. Yet during that time he earned two more college degrees and established his karate dojo as one of the best in Alaska.

A problem and a solution

In the 1990s, Tanaka realized the United States was lacking when it came to highly licensed referees.

His solution? Become the highest-licensed referee in the Western Hemisphere.

The process wasn't easy. The referee rulebook is 57 pages long, and Tanaka has to know it forward and back.

"I remember as we are going out and taking the tests and stuff, on the plane going to Europe or South American countries, I can say this: nobody studied more than I (did)," Tanaka said. "On the plane, they are sleeping or listening to music. That wasn't me, I was studying all the rules inside and out so I knew everything I needed to know."

Within two years, Tanaka was a referee council member of the Pan American Karate Federation, which includes 37 countries in North America, South American, Central America and the Caribbean.

He is currently the highest-licensed referee in the region and has taught many of the other top referees in the United States.

'I don't give compliments often'

Louie-Bradford first joined Tanaka's dojo as a child who, like many kids growing up in the '90s, had a love for the "Teenage Mutant Ninja Turtles" cartoons.

He told his parents he wanted to learn karate and wound up in one of Tanaka's classes.

"I was intimidated and scared by him," Louie-Bradford said. "Back then, I don't want to say Sensei Tanaka was mean, but he was very strict.

"It was very intimidating to have that level of discipline forced onto you. … He was so strict, but in a good way."

By the time he was 15, Louie-Bradford was exceptional at kata, a form of karate with prearranged movements where the competitor fights an imaginary opponent.

Louie-Bradford, now 29, competed at the World Junior championships in 2003 in Marseille, France, where he won gold in his age group in kata.

It was one of the only times Tanaka told him "good job."

"I can probably count on one hand the number of times he told me 'good job,' and that's with competing since '94, so almost 22 years of competing nationally and 15 years competing internationally," said Louie-Bradford, who continues to train with Tanaka and win medals. "And five times he's told me good job."

Tanaka admits he is stingy with praise. He said one reason for this is because when he was younger, his teachers called him a genius, and it made him over-confident.

"… (W)hen the teacher said I was a genius, that was the worst thing they said, because from that point, somehow I thought I didn't have to study because I was a genius," Tanaka said. "Therefore, that's why I have reservation telling the students, 'You're doing great,' because … I don't want them to fall into what I did."

Over the years, Tanaka has made the rounds in the media.

Magazine covers featuring Tanaka line one of the walls at his academy. In the '80s, he was featured on the covers of "Inside Karate," "Karate Illustrated," "Masters of Styles" and "Inside Kung Fu" magazines.

Tanaka said he had a small part in the 1981 martial arts film "Force: Five," but by the end of postproduction his part had all but been edited out.

He had chances to potentially land larger roles in other movie projects, he said — he even won a Hollywood martial arts contest two years in a row — but he needed to move to Los Angeles if a movie career was going to work.

"I was thinking about maybe the fastest way for me to spread what karate is all about is to become a movie star," Tanaka said. "So I used to go see a lot of producers and directors and actors, but they all said if I was really serious about it, I have to live in LA.

Tanaka said sometimes he regrets never moving to the big city, but his goal has always been to mentor his students.

"It was supposed to be one year or two years," Tanaka said of his time in Anchorage. "I'm still here."