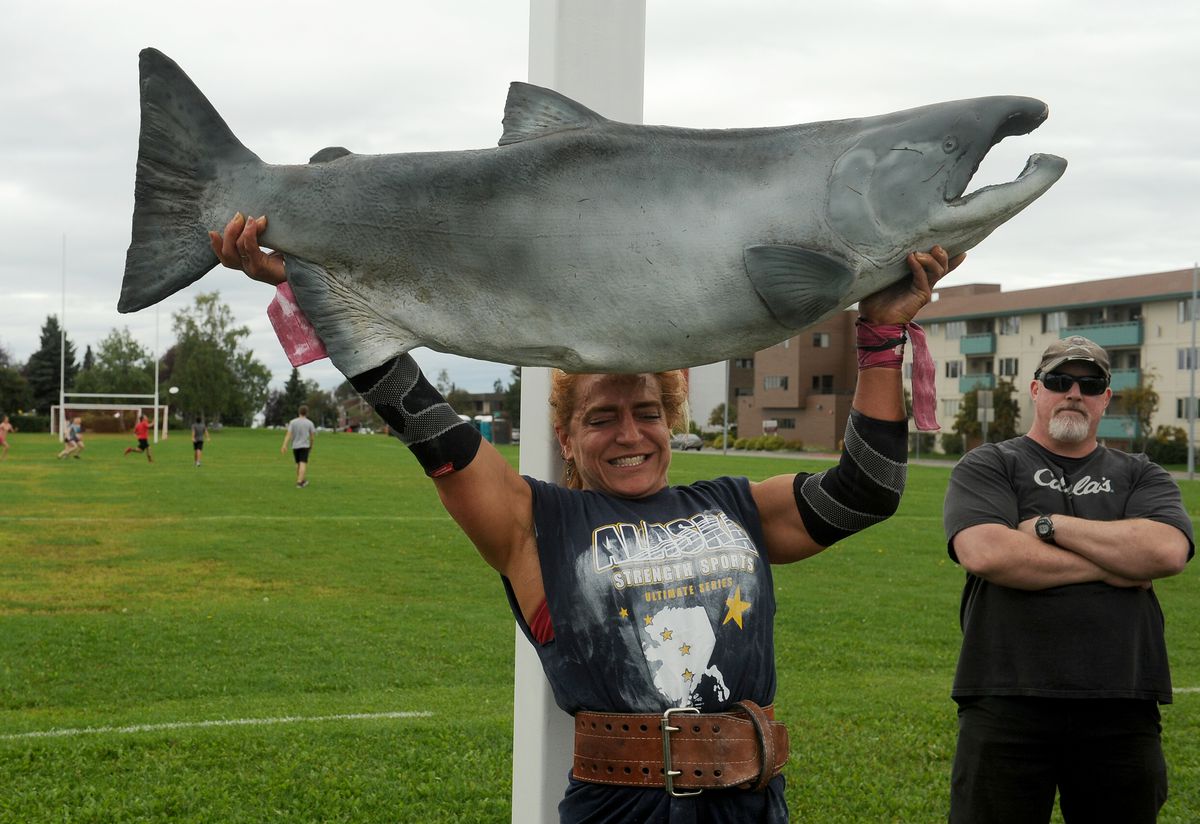 In a span of 23.97 seconds Saturday at the Delaney Park Strip, Nicholas Glenbocki of Big Lake lifted four concrete stones onto a chest-high platform in a display of strength no one else was able to match at the Alaska State Strongman Championships.

Cheering his effort was a small cluster of fans that included Glenbocki's wife, Catherine. She was proud of her husband's performance, but she might be even more enamored by the practical application of all of those muscles.

"We just bought a house in Big Lake," she said, "and he just holds our couch above his head. And we have a giant sectional."

Glenbocki's heavy-lifting moment came in the Atlas stones competition, a signature event at strongman events, where bizarre objects take the place of barbells.

The small field of six men and one woman competed in five events – the Atlas stones, the farmer's walk, the mooring bit carry, the log press and the salmon hold.

In the world of strongmen, the salmon hold is unique to Alaska.

It involves a 50-pound silicone king salmon made especially for Alaskafit Productions, which put on Saturday's competition. Event promoter Garry Lodoen said the salmon was made by Knight's Taxidermy and was molded from a giant chinook caught on the Kenai River.

While the competition's only woman had to hold the fish over her head for as long as she could, the men were challenged to grab it by the tail and hold it at shoulder length with arms extended.

"It's just super awkward," said Brian Peeler of Anchorage, a 183-pounder in the lightweight division who held the salmon for 14.89 seconds. "All the weight's in the bottom, so you're holding something right in front of you, but the weight's all at the bottom."

It's the most uncomfortable event, said heavyweight Patrick Richards of Denver.

Richards held the salmon for 30.33 seconds. Glenbocki's 34.8 was the best time of the day.

Richards, who is 30 years old and weighs about 300 pounds, said he's always been pretty strong. He grew up pushing machinery and moving big hoses on a cranberry farm in Oregon.

Glenbocki, 23, didn't become a strongman until he joined the U.S. Army and started going to the gym.

"When we started dating, he weighed 145 pounds," Catherine said.

Glenbocki was a dirty, gooey mess after the Atlas stones competition. Before the event he spread tacky on his hands to help him keep a grip on the giant stones made slippery by drizzling rain. He finished with clumps of wet grass and dirt stuck all over his hands and wrists, a situation the Glenbockis were prepared for.

"We always have Liquid Wrench in our gear bag," Catherine said.

Adrienne Schendele, the lone woman in the meet, competed in modified events. Instead of holding the salmon on front of her, she held it above her head, something she did for 55 seconds. In the Atlas stones, her rocks weighed 171, 173, 188 and 189 pounds, and she was able to pick up the first two.

Schenfele, 46, said she has spent years training bodybuilders and participating in powerlifting. She started doing strongman events two years ago.

"Strongman requires you to lift a lot and be very fast with it," she said. "It's a lot more dangerous."

But useful. Being able to lift heavy and oddly shaped objects can make you popular among friends or relatives who need to move furniture. And Richards said his strength is an asset in his job as a Denver policeman.

"I'm not gonna run after people too much," he said, "but if I get my hands on you, I don't lose many fights.

"I can pick people up. People throw punches and it doesn't hurt. I have enough strength to overpower a lot of people."

Saturday's overall winners received an interesting assortment of prizes. Schenfele won a gladiator sword and Richards was awarded a battle ax, which he hopes he'll be able to take home to Colorado.

"We'll see what TSA says about this," he said.