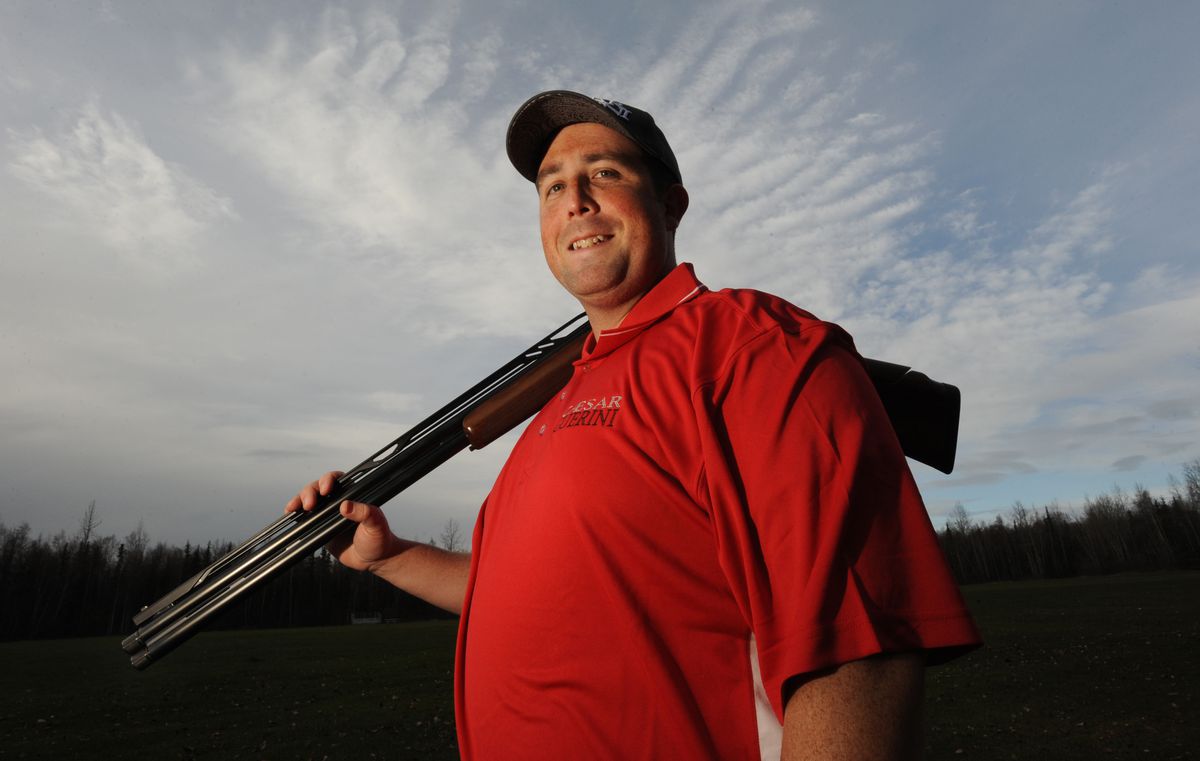 Small clues tell you Andrew McNamara has a thing for skeet shooting.

His dog's name is Briley, after the manufacturer of the tube set McNamara uses to adjust the gauge on his gun.

His email address uses the phrase "hundred straight," which is the number of targets a shooter must hit to post a perfect score.

And soon, the JBER airman will be wearing a flashy ring that identifies him as a world skeet shooting champion.

A week after bagging a pair of grouse while hunting with friends on base, McNamara won the .410 bore title Oct. 8 at the National Shooting Complex in San Antonio, Texas.

McNamara lived up to his email address by breaking 100 straight targets and then beating six other shooters in a sudden-death shoot-off to claim the championship and the coveted ring that comes with it.

"I never in my wildest dreams thought I was going to be the world champion," McNamara said after returning to Alaska. "That day was really windy, and I just felt good about it.

McNamara, a 33-year-old aircraft mechanic stationed at JBER since 2014, has captured state championships in Alaska, Hawaii and Vermont and has competed all over the world. He regularly enters the world championship in San Antonio and twice won the high-overall award in his class, once in Class A and once in Class AA.

But until this year he never had a world title in his sights.

"You go down to Texas, but because it's the world shoot and there's 700-plus people there, if you miss a target usually you're done," he said. "It's just one of those venues, if you're not shooting lights-out, it's kinda 'Thanks for playing.' ''

He rebounded with a perfect score in 28 gauge. He was one of 47 shooters who hit 100 straight to move into the shoot-off, where he was eliminated after eight targets. He wound up placing third in the Class AA competition.

The final competition was .410 bore, in which 708 shooters competed on a blustery Saturday.

"Targets were all over the place," McNamara said.

Yet things felt good right from the start.

McNamara hit all 100 targets — something he'd done only once before in .410 bore — to move into the seven-person shoot-off, where shooters fire at two targets per round.

"They put all seven of us at station 3, and two went out," he said. "We went to (station) 4, and three more went out. At station 5 it was just me and one other guy. He missed the first bird out. Then it was my turn and I broke them both.

"… I can relive the moment, and it's like slow motion. 'Oh my gosh, this is a chance to get a ring.' I took a deep breath and thought it was an hour long. I called for the target and it was like slow-mo. When I hit the second one and it exploded it was like, holy smokes, and the crowd went crazy."

Among those cheering was Peter Bloomfield, a decorated skeet shooter from Great Britain who McNamara met while stationed in England several years ago. Under Bloomfield's guidance, McNamara became a competitive shooter in 2007.

Also offering congratulations was the president of Caesar Guerini USA, the manufacturer of the shotgun McNamara uses.

"It was the first world skeet title ever won with that shotgun," McNamara said. "They asked for photos."

McNamara said he started shooting at age 9 in Vermont but didn't take up competitive shooting until he met Bloomfield.

He and his wife, April, have two children, 5-year-old Warren and 2-year-old Kenneth. The captain of the Air Force's American skeet team since 2011, McNamara said he practices when time allows at the JBER range and the Birchwood shooting range in Chugiak.

"When I step on the skeet field, it's like a light switches on," he said. "I get very serious. I'm there to shoot."