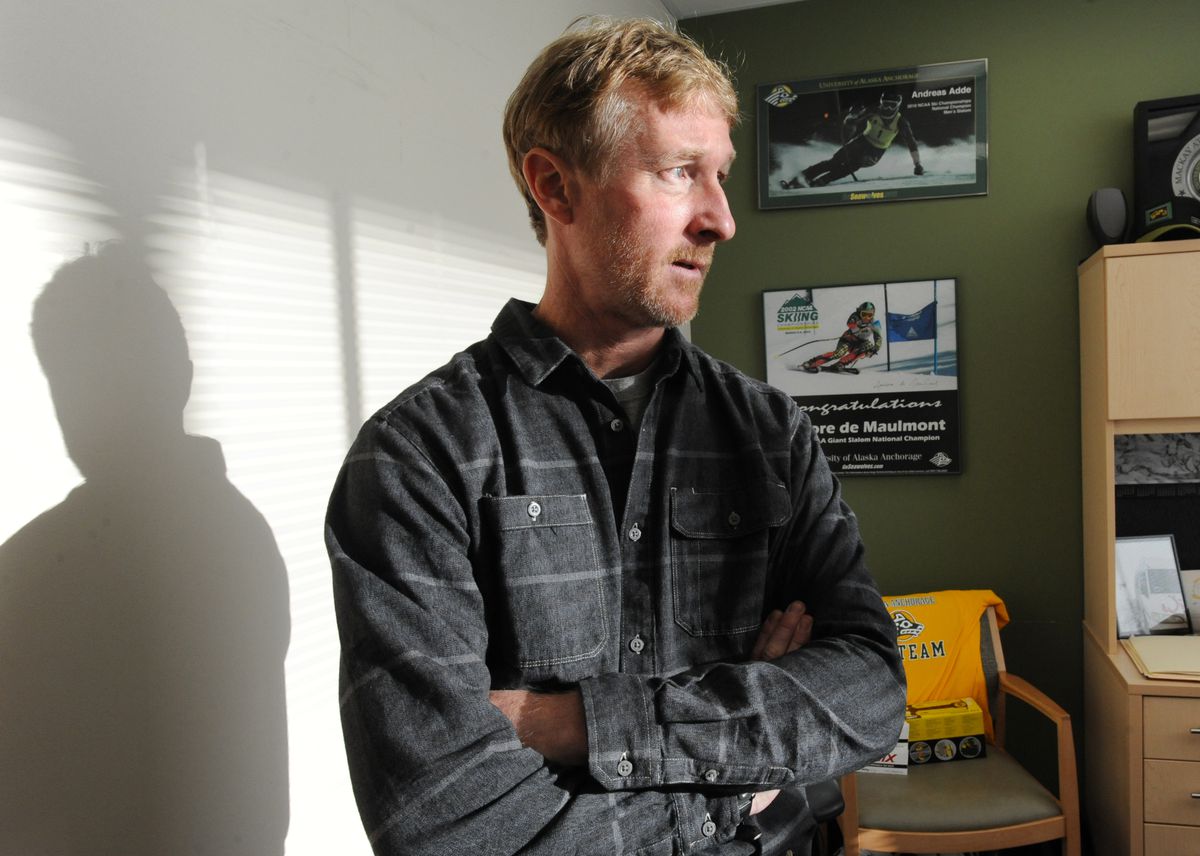 UAA head ski coach Sparky Anderson in his office at the Alaska Airlines Center after learning about the elimination of skiing. “I’m extremely disappointed that the most Alaskan sport is the first to go. I think that’s a giant mistake,” he said. (Bill Roth / Alaska Dispatch News)

UAA head ski coach Sparky Anderson in his office at the Alaska Airlines Center after learning about the elimination of skiing. “I’m extremely disappointed that the most Alaskan sport is the first to go. I think that’s a giant mistake,” he said. (Bill Roth / Alaska Dispatch News)

The same news was delivered to members of UAA's indoor track and field teams, which are among the least expensive and most successful intercollegiate athletic programs in the university system.

Skiing at UAA and UAF and indoor track at UAA are the sports targeted for elimination in a waiver request submitted by the university to the NCAA, University of Alaska president Jim Johnsen said Thursday at an afternoon press conference at the Alaska Airlines Center.

UAA ski coach Sparky Anderson said this will be the final season for a sport that dates back to 1977, which is the first year intercollegiate sports were offered in Anchorage.

"We were told it's a fait accompli," Anderson said. "I'm extremely disappointed that the most Alaskan sport is the first to go. I think that's a giant mistake."

The waiver request is part of the University of Alaska's effort to cut $2.7 million from intercollegiate athletics as it attempts to survive the loss of $50 million in state funding this fiscal year. More cuts are expected for the next fiscal year.

The university is asking the NCAA to waive its requirement that Division II members field a minimum of 10 sports. It wants permission to trim UAA's teams from 13 to nine and UAF's teams from 10 to eight.

If the NCAA grants the waiver and if the Board of Regents approves the elimination of sports teams, this school year would mark the final season of competition for skiing and indoor track. Athletes who are currently receiving athletic scholarships would continue to receive financial aid for the 2017-18 school year, Johnsen said.

If the NCAA rejects the waiver request, "we'll cross that bridge when we come to it," Johnsen said.

Johnsen added that if the waiver is rejected, he will direct UAA to eliminate three of the four targeted teams so the school isn't over the 10-sport minimum.

Should that happen, UAA athletic director Keith Hackett said one of the women's teams is the most likely to be spared so the school can remain in compliance with Title IX, the federal law requiring gender equity.

Andrew Kastning, who coaches UAA's cross-country skiers, said he received a call from Anderson around 10 a.m. as he drove to the Hillside for training.

There was an emergency meeting in an hour, he was told. Kastning went to Hillside to round up skiers already on the trails.

When they arrived at the Alaska Airlines Center, they learned skiing would likely cease at both UAA and UAF.

"It's kind of like learning about a death in the family," Kastning said. "It's devastating. I was brought to tears and looked around and other people were crying. Tissue boxes were being passed around. It was hard to know what to do or say."

Anderson and Kastning would lose their jobs if skiing is cut, as would assistant coaches Sarah Studebaker-Hall and Anna Berecz.

Kastning and Anderson said one of their primary goals this season will be to help their skiers find places where they can continue to compete collegiately.

UAA has 23 skiers, 19 of whom would still have college eligibility after this season.

"We're going to make sure they ski really fast this year and can land on another college team," Kastning said.

Thursday's news came as a surprise to many.

Not only did it deviate from the recommendations outlined in the university's "Strategic Pathways" budget review, it came more than two weeks ahead of a Board of Regents meeting at which regents were expected to discuss the budget solutions for athletics.

"I was under the impression we still had time to fight," Anderson said. "We had put together a significant campaign to meet with members of the (state) Legislature.

"It feels like a disingenuous process. It almost felt like they put this out there (Thursday) to fast-track some of these decisions without a lot of thought."

Johnsen said the process was hastened to accommodate the NCAA's timeline. He said the university had to submit its waiver request in time for the NCAA to review it in early November.

The options presented by the Strategic Pathways put UAA and UAF hockey and UAA gymnastics in the crosshairs, but those sports aren't among those the university proposes to cut.

Hackett said gymnastics is off the hook for Title IX reasons. UAA fields a women's gymnastics team as the result of a Title IX settlement reached decades ago, and if it is cut, another men's team would also have to be cut.

In its request for a waiver, the university cites the state of Alaska's budget crisis and the resulting loss of funding for the university. The university's athletic programs cannot meet the new budgets without eliminating some sports, the request says.

Michael Friess, the coach of the track and cross-country teams, questioned the integrity of the request.

The university is pleading poverty, he said, yet UAA pays tens of thousands of dollars every year to bring Division I basketball teams to Alaska for the Great Alaska Shootout, and UAA and UAF both pay travel subsidies to Western Collegiate Hockey Association teams as a condition of their membership in the Division I hockey conference.

"I think it's a dishonest waiver," Friess said. "The fact that you need to go below the minimum (number of sports) but you can still do all these (other) things?

"… It's disrespectful to those other Division II members who also have difficult financial situations but still meet the minimum (number of sports)."

The six programs destined for elimination would account for $1.1 million, or about 40 percent, of the $2.7 million worth of reductions UAA and UAF are being asked to make to intercollegiate athletics.

"This is a first in what will be a series of announcements of cuts in regards to the budget," Hackett said at Thursday's press conference.

The six teams on the chopping block include 77 athletes at UAA and 18 at UAF.

Some of those athletes compete in multiple sports, so their college careers in Alaska may not be over. Some nordic skiers in Fairbanks also run cross country, and most of UAA's indoor track and field athletes also compete in outdoor track, and some also compete in cross-country running.

For UAA, the elimination of skiing and indoor track would account for about 36 percent of the $1.9 million the Anchorage athletic program has been told to cut.

UAA skiing costs $600,000 and UAA indoor track and field cost $100,000 to $125,000, according to figures provided Thursday by the university. UAA's skiing costs are higher than UAF's because the Seawolves field alpine and nordic teams, and the Nanooks only field a nordic team.

Even with the loss of skiing and indoor track, another $1.2 million in cuts would need to be made at UAA, Hackett said

All of UAA's teams will see reductions, something Hackett said will impact the competitiveness of Seawolves sports, some of which are among the most successful in the country.

"We have developed an elite Division II program here," Hackett said. "This inhibits us in so many ways now.

"You reduce our teams and our budget, and it really impacts our ability to compete at the national level."

The ski team competes at the NCAA Division I level. UAA skiers have won nine individual national championships over the years and in every year since 1981 one or more — often, many more — have earned All-America recognition.

"We were the first here at the University of Alaska Anchorage, and now we're the first to go," Anderson said. "It's like a death in the family."

If the NCAA grants a waiver to the university, the Board of Regents would still have to approve the elimination of sports teams.

If a decision by the NCAA is made in time, the regents will take up the issue at their next board meeting on Nov. 10-11 in Fairbanks.

No public comment will be allowed during that meeting. Instead, public testimony must be made by telephone on Monday from 4-6 p.m. The number to call is 1-866-726-0757.