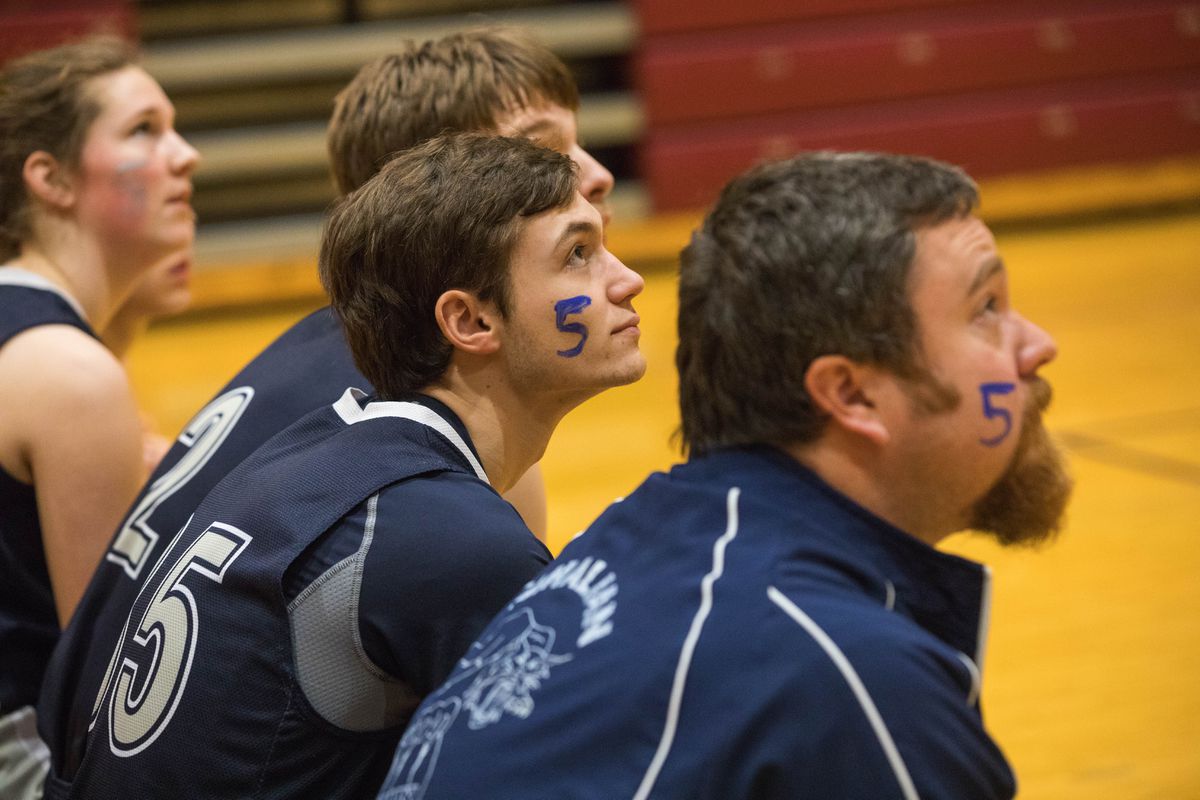 Sam Blom, second from right, watches a play from the bench during a volleyball match against Hoonah on Saturday at Dimond High. Blom lost his father and two siblings when a plane carrying them, en route to Anchorage for the volleyball tournament, crashed in Lake Clark on Wednesday. (Loren Holmes / Alaska Dispatch News)

Sam Blom, second from right, watches a play from the bench during a volleyball match against Hoonah on Saturday at Dimond High. Blom lost his father and two siblings when a plane carrying them, en route to Anchorage for the volleyball tournament, crashed in Lake Clark on Wednesday. (Loren Holmes / Alaska Dispatch News)

The Tanalian School volleyball team was given the option to sit out the Mixed Six state volleyball tournament this weekend in the wake of a Wednesday plane crash that killed four people, including two of their classmates and the father of one of their teammates.

Instead, the Lynx, leaning on their Christian faith, decided to play in honor of their classmates. On Saturday, Tanalian players and fans painted jersey numbers on their faces in silver and blue in memory of their lost classmates — No. 11 for seventh-grader Zach Blom and No. 5 for ninth-grader Kaitlyn Blom.

The Bloms were flying to Anchorage on Wednesday to watch their brother, Sam, a senior, play in the tournament, but the plane never arrived.

"The tournament director gave (the Lynx) the option of whether they even wanted to play," said Tanalian principal Nate Davis. "They decided they wanted to play, and (they) wanted to do it in memory of the classmates that we've lost … play as a team and play for the hope that they have that they're going to see their classmates again because of Jesus Christ. They believe they'll see them again in heaven."

The Lynx were eliminated from the main bracket in Thursday's pool play, but they went 5-1 in consolation pool play Saturday morning, winning their last five single-set matches. That provided a small sliver of hope in a week of pain for the family and the community of Port Alsworth, a village of about 200 people 165 miles southwest of Anchorage.

"They recognized the opportunity they have to share with Alaska the hope that they have," Davis said, "so they decided to do it. It's not easy for any of them."

Julie Blom, the family's mother, and Josh, the oldest child, attended Saturday's matches. Julie flew to Anchorage separately on a commercial flight earlier in the week and Josh, a student at UAA, was already in Anchorage, according to a Friday statement from the Bloms. Sam traveled to Anchorage with the team.

Unalakleet played Tanalian in the opening round on Thursday. On Friday, the Wolfpack gave the Lynx a sympathy card.

"For them to be able to come and play volleyball with that kind of a situation going on in their lives, it was amazing and so heartwarming to see strength in kids at that age," Unalakleet coach Nick Hanson said Friday.

Flying a way of life

For the sports teams and fans from small villages throughout Alaska, traveling in small single-engine planes — like the Piper PA-28 Cherokee that carried Scott Blom, two of his children and pilot Kyle Longerbeam — is a way of life.

"Our school bus to get from town to town to play is a plane," Hanson said. "We're so used to it, we kind of don't even think twice."

Davis estimated that 90 percent of Alaska's Class 1A teams and Class 2A schools are located in "fly-in-only" communities. Most of the 20 teams at the Mixed Six and Class 2A volleyball tournaments flew to Anchorage, either directly or by taking small planes to hub communities like Bethel, where they could take jets or larger planes to Anchorage.

Billy Strickland, the executive director of the Alaska School Activities Association who spent 13 years as an administrator in Bethel, said he couldn't remember any incident comparable to Wednesday's crash at Lake Clark.

He said a plane carrying a volleyball team from Koliganek had to land in Anchorage with badly damaged landing gear in 2014, but nobody was hurt in the incident.

Strickland said each school district has policies regarding safe and unsafe travel. Many times, he said, games are postponed or canceled because of weather.

Davis said traveling in the winter in a small plane can be scary, but there's always concern when a loved one is traveling, whether it's by jet, small plane or car.

"Every accident is tragic, whether it's on the road system or whether it's in the air," Davis said. "It always breaks our hearts, but there's no particular person to blame.

"Accidents happen when there are slippery roads, and there's ice fog and there's head-on collisions, and everyone keeps renting cars and buying cars, driving cars. In remote Alaska, it's that way with airplanes."

In 2005, there was a plane crash near Lake Clark involving members of Davis' family: his brother, sister-in-law and three nieces. Davis' brother and sister-in-law survived, but their daughters died in the crash.

"Because they love Jesus Christ and their faith is in the Bible, they're a stronger family than they were before it happened," Davis said. "That's the only reason."

Davis said Christian faith is also what brought the Bloms to Port Alsworth. The family, originally from Texas, does Christian ministry work.

"That's really what the Blom family is all about, is they're out there specifically living at Port Alsworth so they can love God and love people through the beauty of Alaska," Davis said. "They love it — they love investing in people, building servants, they love Jesus."