Indoor facility has been a 'game-changer' for Alaska athletes 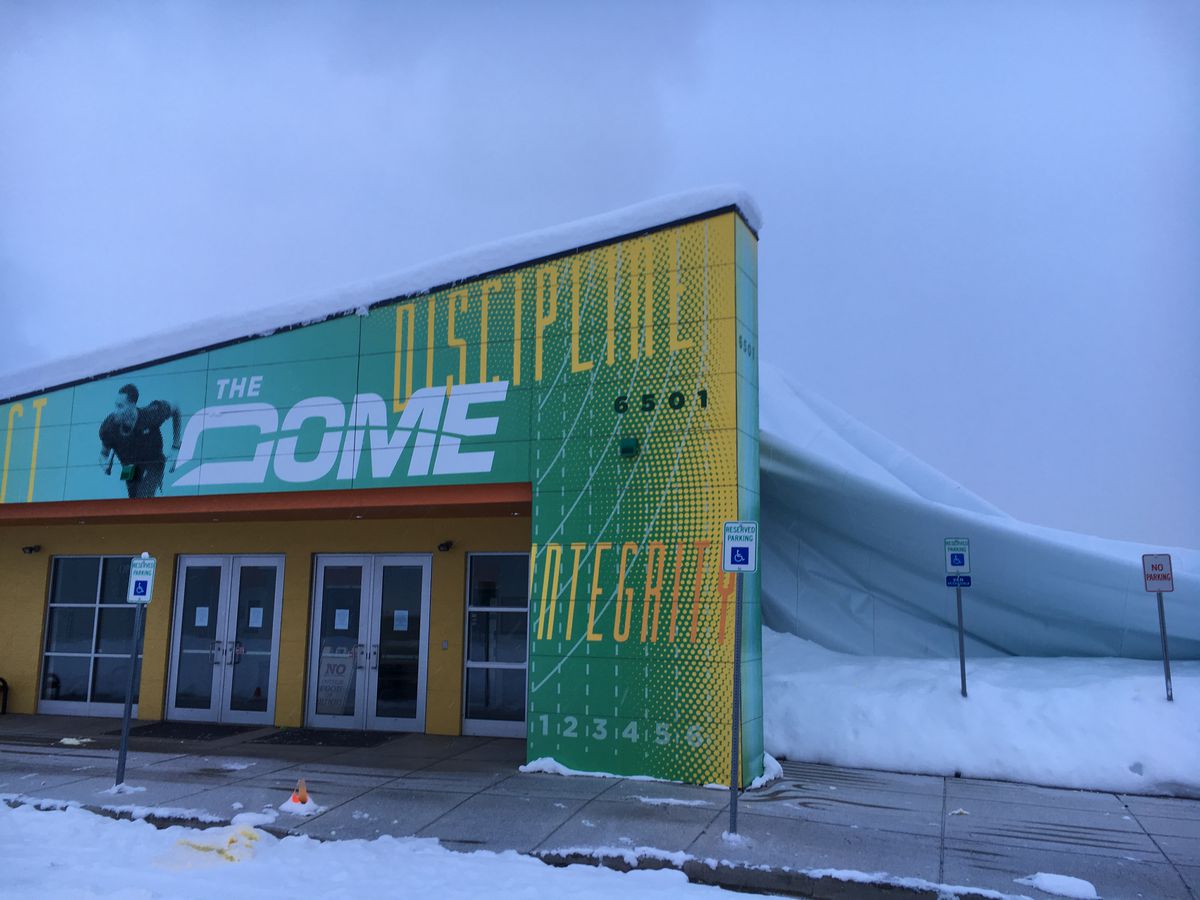 The front entrance of Anchorage indoor track and field venue The Dome, after it collapsed under heavy snowfall Saturday night.

The front entrance of Anchorage indoor track and field venue The Dome, after it collapsed under heavy snowfall Saturday night.

Until recently, The Dome was little more than a South Anchorage landmark to Mark Eppihimer. Cool to drive by, maybe, but nothing special.

Then he started using it as a base for his weight-training and power-lifting group. And he was blown away.

"It was surprising to see how many people utilize that place," Eppihimer said Sunday, the day after the roof fell in on the 180,000-square-foot, air-supported sports facility.

"We had soccer players and baseball coaches, they had the crew of LARPers where they hit each other with the foam swords. And there's another group in there that trained with real swords.

"It's amazing the number of athletes in this place. All shapes and sizes, all ages. There was a couple of (people who) were missing limbs and they were training there. There was another group of people training there in their wheelchairs.

"Anyone who was anyone was under that Dome."

And now they're not.

The overnight collapse of The Dome's roof renders the facility useless for the foreseeable future and displaces thousands of runners, soccer players, baseball players, softball players, rugby players, Ultimate Frisbee players, weightlifters, javelin throwers, volleyball players and others who use The Dome for serious or recreational athletic pursuits.

"We have 140 soccer games from now until April in The Dome," said Dan Rufner, a high school and club soccer coach and administrator for Alaska Youth Soccer.

All kinds of events – from practices to competitions to clinics — will be impacted.

Eppihimer was in the process of planning Alaska's first indoor Hilands Games at The Dome on March 12. Next month, a star-studded cast of Olympians – shot-putter Michelle Carter, long jumper Mike Powell, triple jumper Willie Banks and more – was scheduled to provide instruction at a track and field camp there. This week, Michael Friess was scheduled to coach his nationally ranked track and field athletes there.

As for Abbie Osgood, a South High soccer player, and Hillary Tschappat-Larson, a Service High track and field athlete, they planned to spend their final months as high school seniors at The Dome.

"The Dome is kind of like home in the spring," Tschappat-Larson said Sunday. "My home away from home.

"… I'm doing preseason already and once a week we go to The Dome."

Osgood, who said she grew up playing soccer at The Dome, said she's there all the time.

"There have been weeks where I have gone to The Dome at least six times a week," she said. "I have run there on the track, I play soccer there for high school and club, and I've gone to the open Dome later at night (to) just mess around with friends.

"I've spent many, many hours there."

High school athletes went to Twitter and Snapchat on Sunday to mourn The Dome's demise. "You never know what you have until it's gone. #sundaymorningpractice #ripdome," said a tweet by Osgood.

Comments like that make Friess, the UAA track and cross-country coach, optimistic The Dome will rise again.

"This is a reminder that facilities count. Facilities matter," he said.

Friess said the closure will be temporary, although he doesn't expect The Dome to re-open this school year. He believes facility's popularity – which was widely on display on social media on Sunday — will ensure it gets repaired And it might lure some new sponsors to support it going forward, he said..

Friess turned the Seawolves into a Division II powerhouse thanks in part to The Dome. He calls it a game-changer – a place for outdoor athletes to train and compete year-round.

"In 2006 when (The Dome) opened I shouted from the mountain tops that we have an indispensable thing here for the community," Friess said. "It's easy to take things like this for granted, and when something like this happens, you realize the impact it has.

"…We've got 10 years now where this thing has been operating and we've got a whole generation of soccer players who don't know what it's like to be kicking a ball in the Dimond cafeteria."

If it weren't for The Dome, Friess said, he wouldn't still be coaching in Alaska.

If it weren't for The Dome, Rufner said, fewer kids would be getting college athletic scholarships and fewer teams would be succeeding in Lower 48 tournaments.

Rufner feels lucky because the club he's a coach for, Alaska Rush, already has a contract with Fox Hollow, Anchorage's smaller air-supported dome. Built as a golf facility, Fox Hollow has become a place for soccer too, although Rufner said the turf there is getting old and it's smaller than a regulation soccer field.

He wonders where other teams will practice and play, and he worries about the upcoming high school season.

The Anchorage School District will need to reschedule 80 games that were supposed to be played at The Dome in April, Rufner said. The entire season will need to be condensed in a brief window of perhaps five to six weeks – after the snow clears from outdoor fields and before the end of the school.

He figures teams will have to play three or four times a week, which "is not safe and not good," he said. Because of the sport's speed and intensity, USA Soccer recommends one or two games a week, Rufner said.

High school teams that have practiced at The Dome will have to practice in school gyms, he said, where they will compete for time with other sports teams displaced by The Dome's collapsed roof.

And although practicing in gyms, hallways and cafeterias is something kids used to do all of the time in Anchorage, Rufner isn't eager to return to the gym.

"In 17 years as the Service coach I've had more broken arms playing in gyms," he said. "Gyms are not safe."

Still, teams will cope, he said. "Teams will adapt," he said.

Friess said the Seawolves will kick it old-school.

Distance runners will get on treadmills and take to the trails. Mats can be unrolled at the Alaska Airlines Center for long jumpers and triple jumpers.

Pole vaulters and javelin throwers may face real challenges, he acknowledged, but the weight facilities at the Alaska Airlines Center mean all of UAA's track athletes can work on strength and conditioning.

"Yes, it's bad. I don't like the idea of not having the facilities to train in, but we're not going to make excuses," Friess said. "We know what it's like to train a track team without a track. We have to go old-school."