An innovator on ice, Laura Stamm wrote the book on power skating 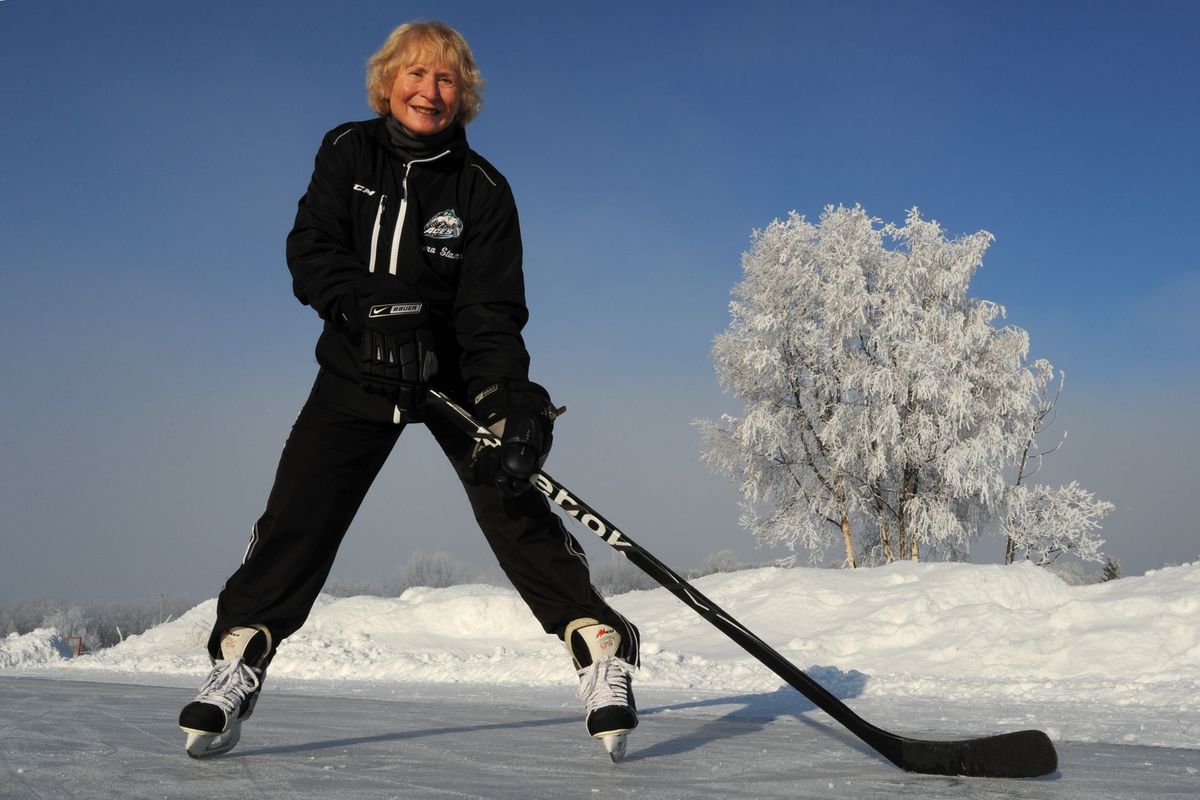 In the 45 years she has worked in a nearly all-male industry, Laura Stamm has never encountered resistance or disrespect and has never experienced a hint of hostility or harassment.

Even today she remains a rarity – a woman who coaches men.

Stamm is a power-skating instructor who has helped hundreds, maybe thousands, of hockey players become better skaters. These days her students include girls and women, but for years they were all men.

Yet even back in the early 1970s, long before Title IX allowed women to become an accepted part of the sports landscape, men welcomed Stamm into their world.

"I never had anyone make a move on me, or make any dirty remarks or disparaging comments," Stamm said recently. "I only got the utmost respect, and the only way I can figure that out is I was helping them, and I was helping them with their careers."

As a result, she never ran into barriers. Never hit a glass ceiling.

But there was one night long ago when one of Alaska's first hockey stars was afraid Stamm would hit the roof.

In the early 1980s, MacSwain played junior hockey for the Dubuque Fighting Saints in Iowa, where he set a U.S. Hockey League scoring record and earned league MVP honors.

When MacSwain was still a teenager, Dubuque coach Jack Barzee was in town the same week Stamm made her first visit to Anchorage. Stamm was here to put on a clinic for a group of players that included MacSwain and Mike Cusack Jr., whose dad arranged Stamm's visit.

The Cusack home was hockey central, and Barzee and Stamm both stayed there. Both had already retired to their respective bedrooms by the time MacSwain showed up.

"I came into the Cusack house and said, 'Where's Coach Jack?' and they told me one of the bedrooms,'' MacSwain said. "I thought, 'OK, now he's in my state, I'm gonna ruffle his feathers like he used to ruffle mine on the road.'

"… I busted in the door, jumped on the bed and said, 'HEY, COACH!' and the next thing I hear is a woman's voice and I froze. They told me the wrong room."

The person he had done a WWE move on was Stamm, not Barzee. MacSwain was mortified.

"My first (thought) was, 'I hope she lets me on the ice the next day,' '' he recalled. "I thought I was kicked out of hockey after that."

But Stamm laughed it off. And then she helped make MacSwain and his buddies — Cusack, Kory Wright, Joey Hayse and others – better skaters.
.
"We were known as very good skaters through our years," MacSwain said. "People would say, 'Man those Alaska guys can skate,' and Laura Stamm was a big, big piece of our puzzle."

Stamm, who is in her 70s, is known throughout the hockey world for developing a teaching system that helped revolutionize the sport. She's No. 98 on the Street and Smith Sport Business Journal's list of "100 people who changed the NHL's business."

She and other instructors at Laura Stamm Power Skating help players improve their speed, agility and balance by teaching techniques Stamm learned as a young figure skater on Long Island in New York.

"I started in my teens," she said. "I was too old to go far with it, but I got pretty good. I had a brilliant teacher and he taught me everything I know about skating, but it was figure skating."

Stamm continued to figure skate through college and after becoming a high school biology teacher. She used the same rink the New York Rangers practiced on, and she loved watching the hockey players in action.

When they came off the ice, she quizzed them about skating.

Before long, the Rangers asked Stamm to teach kids at their summer camp. There, she realized that even though the kids played hockey, many didn't skate well. That summer she developed teaching methods that became the genesis of Laura Stamm Power Skating.

In the summer of 1973, the New York Islanders asked Stamm to work one-on-one with one of their top prospects, Bobby Nystrom.

"I promised him I wouldn't talk about it to anybody, because it was just unheard of, you know, for him as an Islander to be working with a girl," Stamm said. "We did our practices at 6 in the morning, five days a week for eight weeks that summer."

The result boosted both of their careers. Nystrom had a stellar rookie season, and he wasn't embarrassed to tell people the impact of Stamm's coaching.

"He's the one who went telling everybody if it wasn't for me he wouldn't have made the Islanders," Stamm said. "I started getting all this media – radio shows and TV shows, just unbelievable. I was doing something brand new, and it worked."

In 1978, Stamm was featured in a popular advertising campaign for Dewar's scotch whisky called "The Dewar's Profiles." The ad, which ran in numerous national magazines, showed Stamm at an ice rink dressed in hockey gear, one arm resting on the net.

The ad brought her a measure of fame. Between that and her work with NHL players in New York, her reputation spread as far as Alaska.

"One day I got a phone call from Dr. Cusack," she said. "At that time his son was a senior in high school, and he asked me if I could come up and put on a clinic for the boys – and if I did, he would show me all these amazing places in Alaska.

"It took me about a minute to say yes."

That began Stamm's long love affair with Alaska. She has a condo in the New York suburbs and a condo in Anchorage and spends more time here than there, she said. Though she grew up in New York, she's as comfortable at Westchester Lagoon as she is in Westchester County – maybe more so.

"The first time I saw a glacier I thought I had gone to heaven – you know, I love ice," Stamm said. "This is the most beautiful place in the world. On a cold winter day, I can't wait to get on the ice at Westchester Lagoon and just skate around."

Over the years, she has taught scores of Anchorage hockey players, including Justin Johnson, an East High kid who played for UAA from 2002 to 2006, had a long minor-league hockey career and one brief, shining moment in the NHL when he played two games for the Islanders in the 2013-14 season.

"Quite simply, she taught me how to skate," Johnson said. "I would have never ever ever played the role I played at UAA and with the Aces and of course in the NHL without Laura."

Johnson said he first heard about Stamm when he was playing peewee and squirt hockey in the 1990s.

"I saw a picture of her and Wayne Gretzky and that's all I needed, you know what I'm saying? You were in awe of her," he said.

Johnson remembers Stamm using bingo markers on freshly groomed ice at Ben Boeke Arena to show players where and how their strides began and ended.

"She'd say, 'Look, you weren't on your toes at all, your feet were flat. If you're not on your toes you're not going to get the explosion you need.' She makes it make sense," Johnson said. "When she pulled that marker out, you couldn't argue with her. I don't know how Boeke felt about all those marks she left, but I love the woman to death. She cared enough about me to want to help me out."

Johnson said Stamm showed him the proper way to make a crossover step – "I didn't realize there were supposed to be two pushes in there," he said. She taught him how and why to use his skate edges. She talked to him about posture and the importance of core strength.

"She innovated power skating instruction," Johnson said. "Before her, there wasn't a system that you could go by. She actually invented and designed a program that worked. She had diagrams in her book where she broke it down to a science. That's what gave her credibility – because it made sense."

Stamm's instructional book, "Laura Stamm's Power Skating," was originally published in 1989 and is still going strong. It provides instruction on stopping, accelerating, turning and other fundamental – but often neglected – skills.

The online reviews from coaches and skaters are almost all raves. Herb Brooks wrote a foreword for one edition, and NHL players like Luc Robitaille and Rob Niedermayer have endorsed it.

'I see things on the ice'

Stamm was already a teacher when she started working with the New York Rangers. But by her own account, she didn't become a good teacher until she put her skills on ice.

"The only thing in life I was good at was teaching skating," she said. "And I think I was really good at it.

"… My real gift is my eyes. I can see things on the ice. And then I was able to communicate them in a way that wasn't high and mighty but in a way that made sense to them."

Stamm didn't invent the phrase "power skating." What she did was come up with a way to teach it.

"I made it up as I went along," she said of her early days as an instructor. "Skating seems so natural to me."

It's not all about power, she said. It's about quickness, agility and balance. It's about the ABCs of ice skating and hockey.

"Even something as simple as keeping your stick on the ice," she said. "Wayne Gretzky used to say that anybody who skates with his stick in the air is playing for the other team. When I see pros skating around with their sticks waving in the air, I think, 'Why are they doing that?' They don't know they're doing it.''

Although other instructors put on Laura Stamm Power Skating clinics in Canada and the Lower 48, Stamm still runs clinics in Alaska and sometimes makes guest appearances at clinics outside Alaska.

She has worked with the Alaska Aces for more than a decade, ever since Davis Payne was the coach from 2003 to 2007.

Rob Murray, the team's current coach, said it's a big plus for the team to have someone who can make players more efficient skaters.

"(She) sees things that a coach doesn't see," he said. "The technique of skating, why one guy's maybe not keeping his edges or staying on his feet or not being able to pivot the proper way. Those little things (that) my eye doesn't gravitate to, but hers does."

"He was a very good skater right off the top. It wasn't like someone had to teach him how to skate," he said. "But he couldn't keep his feet. He'd go really fast and fall down all the time."

Stamm, he said, recognized that Mele was sometimes leaning too much and sometimes not enough.

"He was imbalancing himself on his feet, and she helped him with that," Murray said.

Steve MacSwain remembers how Stamm taught him to use his whole body when skating.

"She was the first one to teach me about upper-body movement and how everything's got to work together, so your arms work with your legs," he said. "I can't remember ever hearing stuff like that. You just knew she was ahead of her time back then when she was talking about stuff like that."

Justin Johnson thinks Stamm should be in the Hockey Hall of Fame. MacSwain calls her the master of the art of skating.

"She's touched so many hockey players at so many levels," MacSwain said. "You listen to her because she's one of the great ones. When you talk about U.S. hockey and the people who have been great contributors, people put her high on that list."