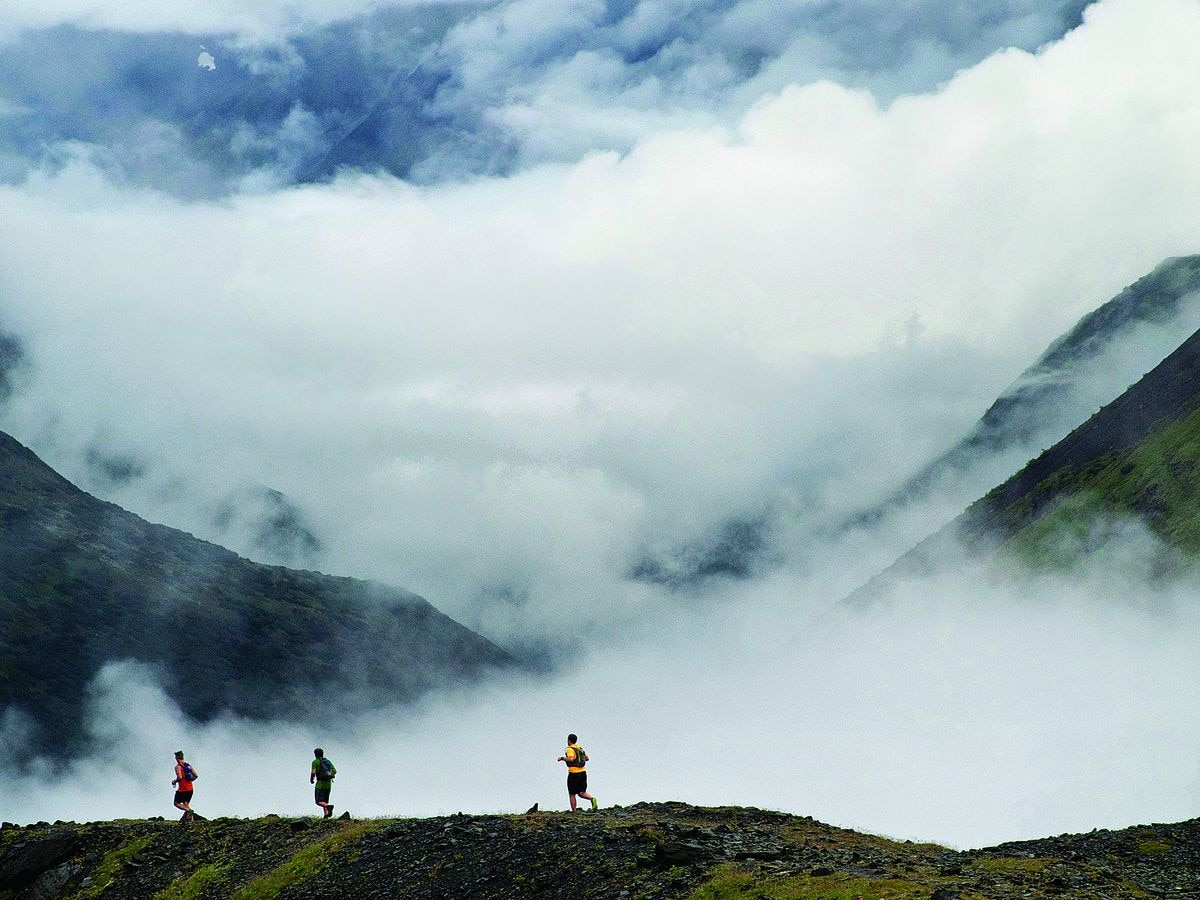 No aid stations. No orange slices. No course flagging or mile markers. Each racer is responsible for getting from Crow Pass Trailhead near Girdwood to the Eagle River Nature Center.

The race registration form pulls no punches either, and includes a bold-faced, italicized warning:

"This is a risk-filled and dangerous race. Bad things can and usually do happen. Someone has been injured or imperiled each year. There are very real hazards and little chance of immediate medical aid if needed.''

"Even with all of that, is it enough? That's something we're going to look at. You're always thinking about how you can make it safer.''

Race directors for Alaska’s mountain and trail races are considering safety enhancements after Sunday’s death of 16-year-old Patrick “Jack’’ Cooper of Anchorage. Cooper was killed by a black bear when he apparently got lost off-trail while descending Bird Ridge after completing the junior race in the uphill-only Robert Spurr Memorial Hill Climb.

Crow Pass Crossing is being reviewed by administrators at the University of Alaska Anchorage, which puts on the race. Bird Ridge may require junior-level racers to descend in pairs or in groups. And the race director for this weekend's Kesugi Ridge Traverse in Denali State Park is recommending runners carry bear spray.

Bears sightings and occasional encounters are not uncommon in Alaska mountain and trail runs, which have blossomed in popularity so much in the last two decades that some events employ a lottery system for coveted race entries. The Alaska Mountain Runners' Grand Prix consists of seven races, and there are nearly two dozen trail and mountain races in all this summer in Southcentral Alaska.

Crow Pass racers spot bears annually, and many times racers have been halted by a bear on the trail or just off the trail. Matias Saari was leading the Turnagain Arm Trail Run one year when he slammed on his brakes because of a brown bear ahead. He waited for runner Trond Flagstad, and the pair's shouting eventually prompted the bear to scamper.

[Biologists killed the bear believed to have killed young runner]

Harlow Robinson of Anchorage is a longtime trail and mountain runner — he's won Crow Pass twice and seized the punishing Matanuska Peak Challenge six times — and he understands what he's getting into when he competes off-road.

"If you are going to participate in mountain running events in Alaska, you have to accept the inherent risks,'' Robinson said. "One of those is bears. One of those is breaking your leg, or getting in a car accident on the way to the race.

"I think we need to let emotions take their course. I think it'll be important for all race organizers to do risk assessment.

"Everything should be prefaced by the fact this is so heartbreaking, and I feel so badly for the (Cooper) family. The reality is, it's far more dangerous to drive from here to the Bird Ridge parking lot than it is to hike up and down that ridge.''

Races like Bird Ridge, which receives its permit from Chugach State Park, operate under myriad stipulations.

Among them is a cap on the size of the field to control impact on the land, a prerace course inspection by organizers to note dangerous terrain and wildlife, a prerace address to competitors about potential pitfalls, on-site first-aid kits and a postrace sweep of the course to make sure all racers are accounted for.

He said he warned runners a brown bear was spotted high on the mountain that morning. The bear was seen leaving the area of the trail, Precosky said, so the race started as scheduled.

Volunteers were armed with bear spray at the halfway point – the junior finish line – and also atop the mountain at the senior-division finish line, he said.

Robinson did not compete Sunday but has raced Bird Ridge many times, as have his sons, Eli, 13, and Rowan, 11. He said he would have no qualms about his boys running Bird Ridge again, in part because he believes Precosky is a detail-oriented race director.

"That man is the most meticulous and conscientious organizer I know,'' Robinson said. "No matter the size of the race, safety is his first concern.''

Tom Harrison, superintendent for Chugach State Park, said Precosky and his all-volunteer staff "put on a professional race.'' He said safety concerns in the wake of Cooper's death will likely be addressed by the park's advisory board.

"We plan on looking into it with respect to these types of events,'' Harrison said. "Are there stipulations that can be added after this tragic event?''

Harrison called issues surrounding racing and other recreational pursuits in the park "complex and challenging.'' He said park officials aim to balance recreation and resources.

"We want to provide outdoor recreational opportunities and preserve the natural, cultural and historical resources for the people,'' Harrison said.

‘Give them the wings’

Christy Marvin of Palmer is a decorated mountain and trail racer. Pick a Southcentral off-road race – Mount Marathon, Crow Pass, Bird Ridge, the Matanuska Peak Challenge — and she's not only likely won it, but won it multiple times.

She’s also a mother of three young boys who have run the junior race at Bird Ridge, and she said Sunday’s tragedy – “a parent’s worst nightmare’’ – has prompted her to weigh risks against benefits.

"It's been a sad thing that's on all of our minds,'' Marvin said. "It's been a sobering reminder. First off, love your loved ones while you have them because God only knows the day and hour we each breathe our last.

"And it's a wakeup call about our kids and what they do.''

[Bear attacks are still rare in Anchorage. But the dynamics of Sunday's fatal mauling stand out from history.]

Marvin said she and her husband, Ben, also a mountain runner, have considered additional safety measures when their kids race. She said they've talked about the boys each carrying bear spray and each having a cellphone in case of an emergency.

"It's a terrible tragedy, what happened,'' Marvin said. "But I also feel like it's tragic to see a kid locked in a room for 16 hours with a computer and an iPad.

"At the end of the day, I have to live with what I decide to let my children do. Even though it can be nerve-racking at times, and I'm not always comfortable, you have to let your kids have opportunities, give them the wings to go explore this beautiful world we live in.''

Safety: ‘You can always improve’

One woman pulled out of the race this week over concerns about bears, he said.

Saari said he emailed participants this week to encourage them to carry bear spray. He said Ben Marvin, who will be stationed at the halfway point while he and his family serve as race volunteers, will be armed.

"There have been bears seen in the past,'' Saari said. "It's a 30-mile backcountry event. You're in bear territory, and it's certainly possible to encounter bears.''

Friess, the longtime UAA running coach who directs Crow Pass as a fundraiser for UAA's Milers Booster Club, said he is talking to UAA administrators this week about possible ways to improve race safety. He said he will encourage Crow Pass racers to carry bear spray.

Crow Pass, which has been run since 1984, has throughout its history taken safety measures. Racers are required to carry eight items — wind pants, wind jacket, long-sleeve shirt, long pants, stocking cap, gloves, water bottle/hydration system and race bib – and asked to assist any runner in distress. Racers are also strongly encouraged to run the entirety of the 23-mile course prior to race day.

Precosky said one safety measure under consideration for Bird Ridge would require junior racers to descend in pairs, or even larger groups, to decrease chances of getting lost.

He may also strongly encourage every runner to hike the trail prior to race day, even though it is generally obvious from base to peak.

"We're open to anything – you can always improve,'' Precosky said.

Suggestions that mountain races string volunteers along the course at frequent intervals are likely unfeasible. The race on Bird Ridge, for instance, climbs for 3 miles and would require dozens, perhaps scores, of course monitors for a race limited to 250 participants.

"Having a force on the mountain, that's really hard to do,'' he said. "I've gone through that turnover (in volunteers) a number of times.''

Kim Titchener of Camrose, Alberta, is founder of Bear Safety & More, which conducts bear and wildlife training assessments for staffs working in natural habitats. She's also a trail runner. She advises races about safety protocol, and she's done work in Alaska, most recently for a cruise ship company.

Titchener advises race officials to hold a prerace safety briefing. She tells runners to be bear-aware by consistently looking around and making noise.

"I make a ton of noise,'' she said. "If you let bears know you're coming, most often they get out of the way.''

Tichener is also a strong advocate for carrying bear spray. She thinks it should be mandatory in all trail and mountain races, and notes that is the case at events in Alberta's Canmore Nordic Center Provincial Park.

Robinson said he almost always carries bear spray on training runs but has never done so in races, likely because he feels some sense of security amid a large group of runners.

"It's an illusion,'' Robinson said. "I'm as guilty as anyone of not taking (race) precautions.''

That will change Saturday when Robinson races Kesugi Ridge.

"I've never carried bear spray in races, and I was texting a friend today that I'm carrying bear spray at Kesugi,'' he said.

He feels terribly for Cooper’s family. He knows the mountain-running community he holds so dear is mourning with him. He’s thankful for the help and professionalism Sunday — when the search for Cooper turned into a retrieval of the boy’s body — from state parks officials, law enforcement, emergency medical workers, pararescuers and racers.

The mountains are Precosky's home. He lives in Bear Valley. He finds running trails and mountains his meditation, and his medication. That's where he ponders problems and seek solutions, where he found his identity.

He can't understand critics who think the tragedy of Cooper's death should bring a halt to mountain races, or that people should stop going into the mountains. To Precosky, the mountains are freedom and spiritual sustenance.

"Some people say you shouldn't have races. I say have more races. The mountains, they clean the soul.''