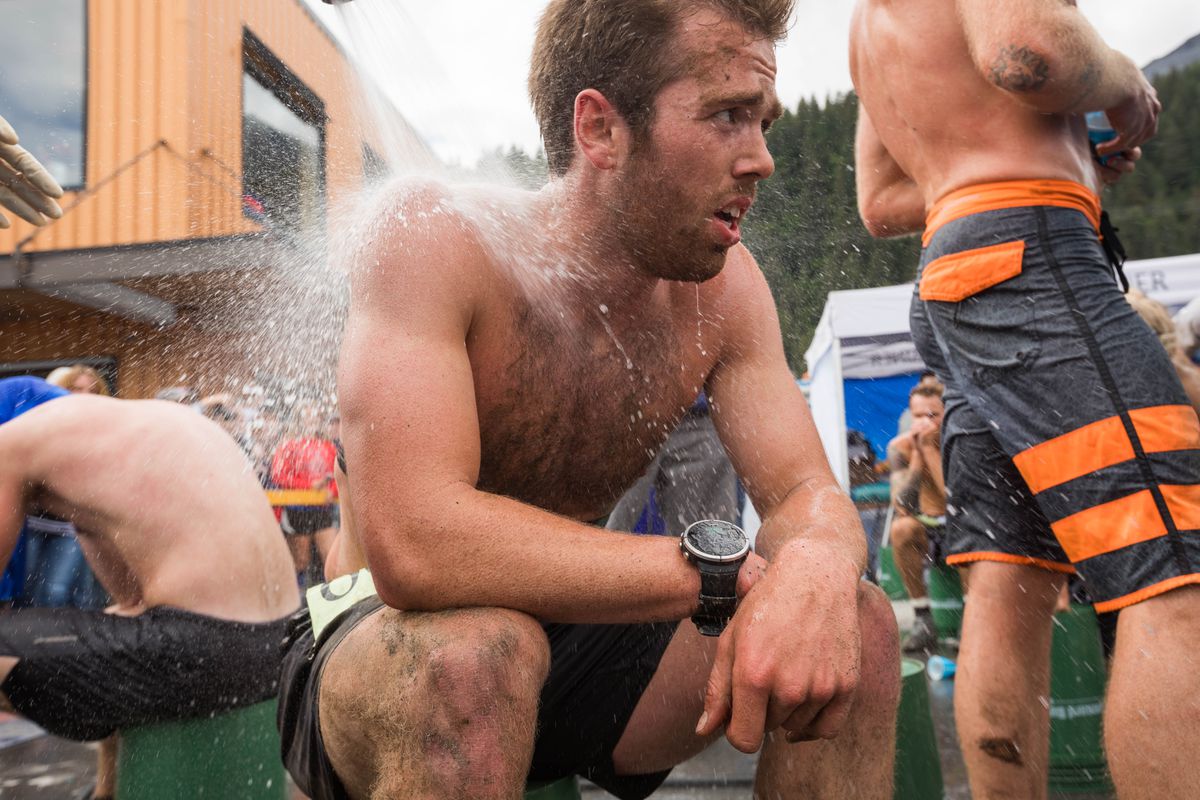 Conor Deal gets hosed off after finishing the 90th Mount Marathon Race last week in Seward. Deal is one of more than 200 racers who will race the Alaskaman Extreme Triathlon on Saturday. (Loren Holmes / Alaska Dispatch News)

Conor Deal gets hosed off after finishing the 90th Mount Marathon Race last week in Seward. Deal is one of more than 200 racers who will race the Alaskaman Extreme Triathlon on Saturday. (Loren Holmes / Alaska Dispatch News)

Crazy or not, more than 200 fearless athletes will brave Alaska's water and mountains this weekend in the inaugural Alaskaman Extreme Triathlon.

The race from Seward to Girdwood starts with a 2.6-mile swim in Resurrection Bay, continues with a 112-mile bike ride on the Seward Highway and ends with a 27-mile run that includes two trips up Mount Alyeska.

Race director Aaron Palaian, an extreme triathlete from Houston, said the race features more than 10,000 feet of elevation gain and waters expected to be 55 degrees.

"It's a pretty extreme one," said Amber Stull, a three-time Gold Nugget Triathlon winner from Anchorage. "I'm really excited to test my limitations, in a smart way."

Palaian said he got the idea for the race when racing in extreme triathlons overseas. While at a race in Norway, race directors mentioned to the American athletes that they were at the same latitude as Anchorage.

"And I thought, 'Why don't we have a race in (Alaska)?' " Palaian said. The Alaskaman is the first extreme triathlon in the United States, he said.

Saturday's race will include athletes from 39 states and 14 countries, and about one-third of the field will be Alaskans.

Stull said Alaska racers will have a big advantage because they'll know what to expect as far as wildlife, terrain and weather.

"Alaskans are tough," Stull said. "We're tough 'cause we have to be. When elements aren't conducive you have to find a way."

Normally a sprint triathlete, Stull, 39, is usually among the favorites in most of her races. But two years ago, a back injury left her wondering if she'd ever get back to top shape.

Stull injured her back slipping on black ice in January 2015, and spent most of the year in chronic pain.

"Eventually I built up to (full) running and … now here I am going to do Alaskaman."

Another racer Saturday will be former hockey player Conor Deal. The 24-year-old Service grad spent a season at Division III Gustavus Adolphus in 2014-15, posting 10-10—20 totals in 25 games. He transferred to UAA to pursue an aviation degree and try to break into the Seawolves' lineup.

But after not getting any playing time in two years at UAA, Deal decided to switch his athletic focus to mountain running and triathlons.

"It's kind of that cliche, 'always take on a new challenge,' " Deal said. "I thought it would be something cool to train for quite a while."

For Deal, training for an extreme triathlon meant balancing training, work, hockey and school, where he is a dean's list student.

Over the winter, Tuesdays were his toughest training day. He'd start at 6 a.m. with an hour swim, the go to hockey practice from 8-11 a.m. After that, it was class, then a 45-minute bike ride followed by an hour run.

"I was pretty dang busy all winter, but I loved it," Deal said. "I would throw on NHL TV and just watch NHL hockey while I was doing my bike.

"Sometimes I'd watch homework videos, but that got boring real quickly."

Both Stull, an avid cyclist, and Deal, an 11-time Mount Marathon senior and junior finisher, said they expect the swim to be their weakest leg. Both did laps at Little Campbell Lake in Anchorage's Kincaid Park to prepare.

"If you do that down and back four times you get about 2.5 miles and that's the distance for this race," Stull said. "You get an idea of what your body will feel like cold. That's a good (place) close to home."

[An extreme triathlon is coming to Alaska, and it's already sold out]

From a mandatory support crew for every racer, to volunteers armed with bear spray, Palaian said he's trying to make the race as safe as possible.

Palaian said officials will ride the course ahead of racers on race day to scout for bears. Racers are strongly encouraged to carry bear spray and bear bells.

In June, there were two bear-attack deaths in Alaska in two days, with one happening after a mountain race near Anchorage.

"We've instilled them a million times over the seriousness of (bears)," Palaian said.

Every competitor will have a support team of one to five members for safety.

In the week before race day, Palaian also slightly altered the swim course to avoid a sewer outfall exclusion zone in Resurrection Bay, after receiving complaints.

"I've talked to (the City of) Seward, and they've told me it's fine (but) if we start the race and cut it diagonally a little bit, we avoid the entire area," he said.

All that's left now is the race itself. Alaskaman will start at 4:30 a.m. to catch the tide and the first finishers are expected at the finish line in the early afternoon, Palaian said.

"From what I can tell, we've planned the best we can," he said.