If he can avoid flat tires, this Alaskan might make it as a professional triathlete 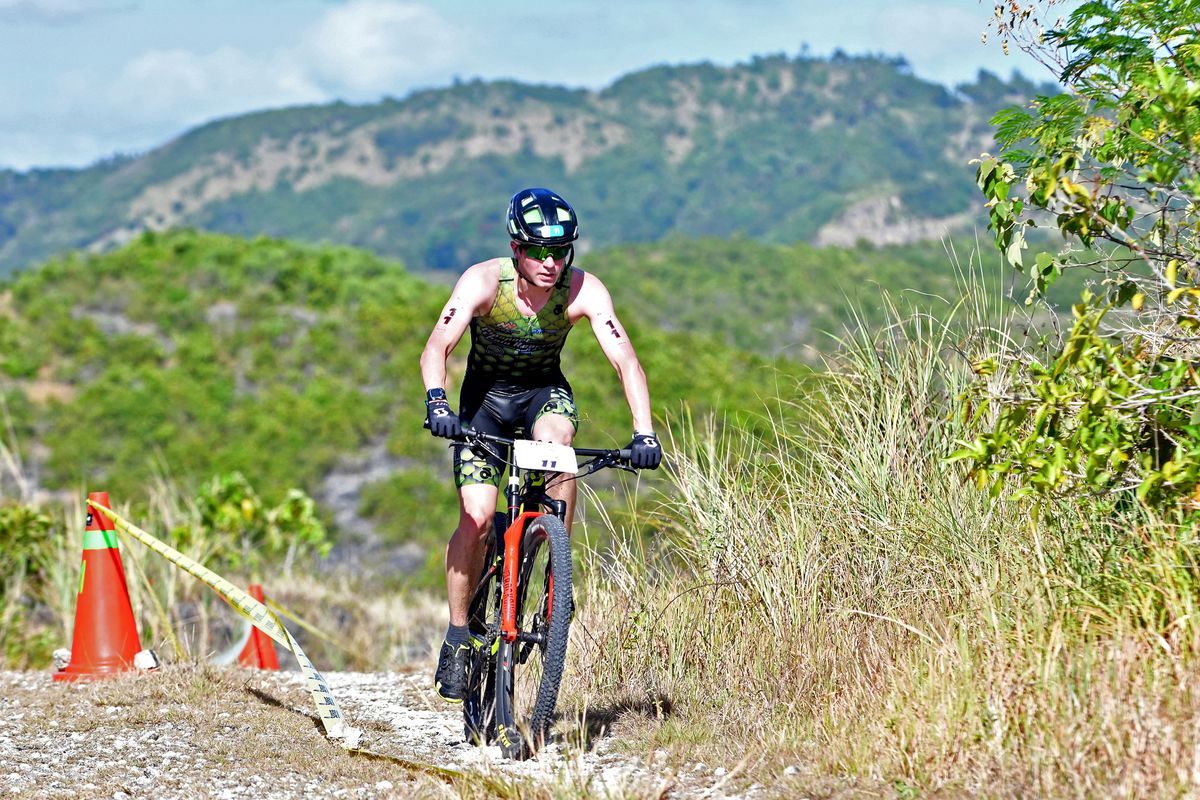 Anchorage’s Will Ross battles heat and humidity during the 28-kilometer bike leg of an International XTERRA Off Road Triathlon in Danao, Philippines. Ross placed eighth in the April 22 race. (Anthony Yu / Sunrise Events)

Anchorage’s Will Ross battles heat and humidity during the 28-kilometer bike leg of an International XTERRA Off Road Triathlon in Danao, Philippines. Ross placed eighth in the April 22 race. (Anthony Yu / Sunrise Events)

Will Ross, Alaska's finest off-road triathlete, plans to spend the summer seeing if he has what it takes to make it as a professional athlete.

So far, so good. Unless you count having to fix a flat bicycle tire in 90-degree heat while some of the fastest racers in the world whiz past you.

Ross, 29, demonstrated resourcefulness and resiliency to claim eighth place despite a major mishap in his international debut last month in the Philippines.

The Service High graduate bounced back from a flat tire early in the bike leg to score his biggest single-day paycheck as a triathlete — $600 – at the April 22 XTERRA Asia-Pacific Championships in Danao.

The race was the first of about a dozen XTERRA triathlons that Ross plans to enter this summer, the most ambitious schedule yet for the eight-time winner of Anchorage's Hammerman triathlon.

"I kinda realized I'm getting older — I'm not getting any younger," Ross said in an interview this week. "The top racers are all between 30 and 38, so if I'm gonna make it happen, I've gotta do it soon."

Ross has raced as a pro since 2011, but until last month he had never traveled internationally for a race. Nor has he ever before committed to such an ambitious competitive schedule.

In his international debut, Ross contended with the worst heat and humidity he's ever experienced in a race. Temperatures climbed into the 90s with no clouds, no breeze. "Even the water temperature was over 80," he said.

Ross said he had a great, 1,500-meter warm-water swim in the Pacific Ocean and was in ninth place heading into the 28-kilometer bike race.

An accomplished mountain and fat biker, he attacked the course's steep climbs to move closer to the front of the pack.

"I was in sixth place getting ready to make a pass for fifth, and fourth place was within sight, so I was definitely on the move," he said.

And then his race came to a standstill. On a relatively smooth downhill, Ross punctured a tire on what he thinks was a sharp piece of lava rock.

He was able to fix it — "I have flatted so many tires and broken so many chains in previous races that I now make sure I race with extra inner tubes, CO2 cartridges, chain links and tools," he said — but he figures the delay cost him a good five minutes and dozens of places.

After the bike came an 8-kilometer run up and down steep lava-rock trails that were perhaps the most demanding part of the race.

"During the run the heat got real," Ross said by email shortly after the race. "Some of the hills were too steep to run, so I was reduced to walking, which was extra-hot with less wind at my face.

"It was so hot I felt like my brain was buzzing. I stopped at every aid station and dumped ice down my racing suit which would be completely melted by the next aid station a kilometer later."

Ross said this week that his off-road adventures in Alaska prepared him well for a technical running course with rocky downhills. That helped him claim eighth place in 2 hours, 46 minutes, 53 seconds. South Africa's Bradley Weiss, the reigning XTERRA world champion, won in 2:16:28.

Ross is willing to give his dream a couple of years. But how he fares this summer will be critical.

His goal is to make enough prize money and get enough sponsors so he can make a living in the sport. While in the Philippines, he learned such a thing is possible — he shared a room with a New Zealand athlete who is a full-time racer.

Ross currently works three days a week at Chain Reaction Cycles. He has a bike sponsor that gives him a good deal on equipment, but "nothing is free yet," he said this week.

Though his race schedule will keep him on the road for much of the summer, Ross said he'll be in Anchorage to defend his Hammerman title and compete in the second annual 141-mile Alaskaman Triathlon from Seward to Girdwood.

He also carved in some time to get married on Aug. 4. His fiancée, Andrea Kettler, is also an off-road triathlete, and Ross said she's supportive of what he's trying to do.

"I'm really lucky that she supports me a lot. She wants me to make it," he said.