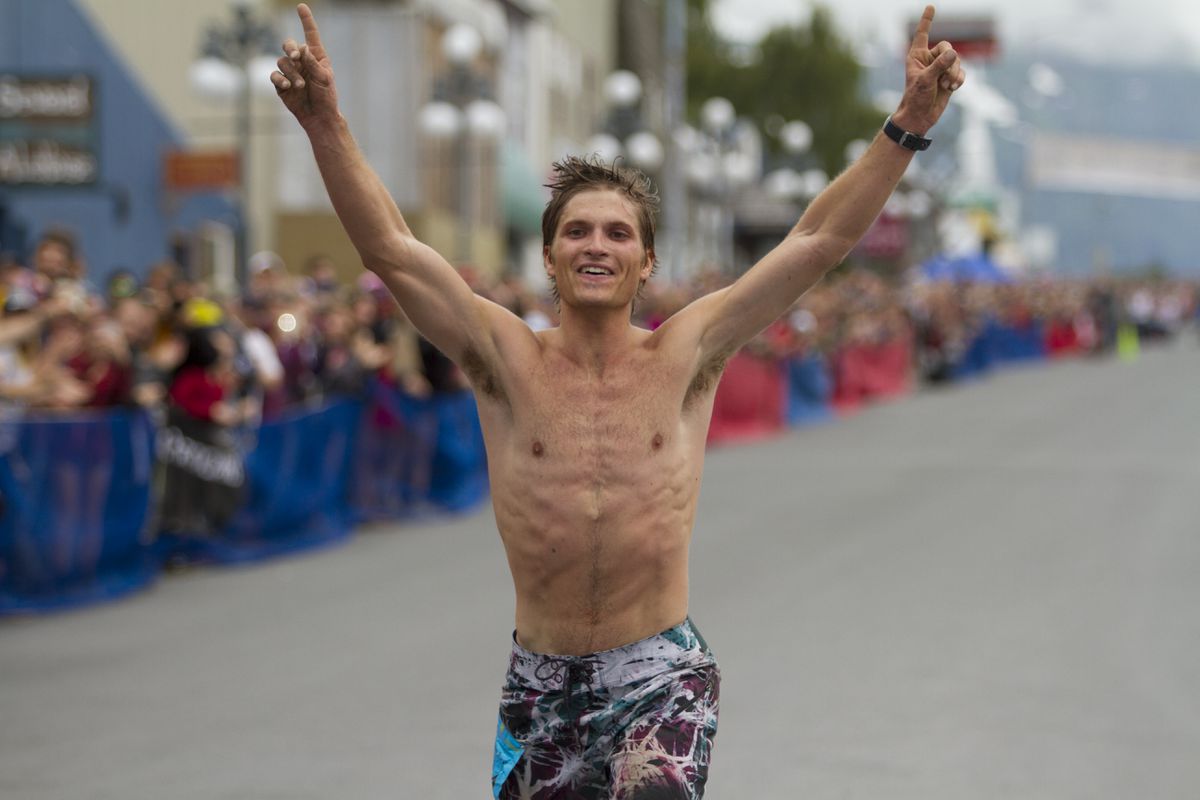 David Norris is a cross-country skier by profession, but it's his side job that makes him an Alaska sports giant.

In his Mount Marathon debut two years ago, Norris delivered a performance that put one of Alaska's most cherished sports records back in the hands of an Alaskan.

He won the 2016 Fourth of July race in Seward with the fastest time in history to strip the record from Spain's Kilian Jornet, the 2015 champion. Norris finished in 41 minutes, 26 seconds, beating Jornet's mark by 22 seconds.

In the finish chute after the race you could feel the pride from other Alaska runners as one after another  congratulated Norris, who grew up in Fairbanks and lives in Anchorage.

The spoils of victory came later.

"It definitely had a really positive impact on my athletic career," Norris said Saturday. "Racing (Mount Marathon) is good exposure for the sponsors that help me with my skiing.

"Getting the name out there is important. We have good (press) coverage when we ski race, but as you know you can have a great day on the World Cup and be in 20th place, (so) not many Alaskans will hear about it."

After sitting out last year's race for cautionary reasons – he had just recovered from a knee injury and didn't want to risk hurting it again — Norris is returning to Mount Marathon.

He is just about everyone's favorite to win. He flashed his fitness at last month's Robert Spurr Memorial Hill Climb at Bird Ridge, where he broke the course record while becoming the first person in race history to break the 37-minute mark.

Defending champion Scott Patterson is out with a broken toe. Three-time champion and former record-holder Eric Strabel is also out with an injury.

Two elite runners from the Lower 48 are among the top challengers – ultra-marathoner Max King of Oregon and two-time Mount Marathon runner-up Rickey Gates of Colorado – but neither is favored the way Norris is.

"If I was putting money on it, I'd go with David," said Patterson, an Olympic skier who fractured his big toe last month while ski training on Eagle Glacier. "Two years ago he beat me to the top fair and square.

"… I think we saw at Bird Ridge that David's kind of a league ahead of everyone else who's racing right now."

King is a former steeplechaser who won the 2011 world mountain running championship and 2014 100-kilometer world championship. But he's a Mount Marathon rookie and no one knows how he'll handle the race's treacherous descent.

"I know he's a phenomenal runner," Norris said, "but people have told me mountain running outside of Alaska is closer to what an Alaskan would consider trail running. So a great mountain runner from the Lower 48 might not be as strong on Mount Marathon."

Gates has shown that Lower 48 runners can keep up with the Alaskans – he has posted two times that rank among the top five all-time, but in each case he placed second to a record-setting winner.

Gates didn't race last year and instead spent five months running 3,700 miles across the United States. Fans and racers will learn Wednesday whether he has returned to race shape.

Norris, 27, said he doesn't mind being the pre-race favorite. The label comes with pressure, he said, "but not in a negative way."

"My goal is to beat my previous time to the top," he said. "I don't imagine I'm going to run the downhill any faster because I still think I should be safe and responsible about that, but I would love to run the uphill as fast as I can."

Norris is concerned about a safe descent because he doesn't want to risk injury as he prepares for the ski season. He is part of a strong men's ski team at Alaska Pacific University, which sent five men to the Winter Olympics in February.

Norris wasn't one of them. He got sick right after Christmas and missed the first two races at January's U.S. National Championships at Kincaid Park, where Olympic berths were at stake.

"I had the choice of racing sick or saving myself and trying to do well in the 30K," he said. "I just decided to put all my eggs in that one basket and that race didn't go horribly, but I didn't ski well enough to make the Olympics."

Norris shook off his disappointment and rebounded strongly. He won the overall title on the Super Tour domestic racing circuit, which puts him on the U.S. Ski Team's World Cup team for the first half of the ski season.

At the World Cup level, Norris will race in front of enormous crowds in Europe. But it's likely none will make him feel as special as the Seward crowd did on the day he set the Mount Marathon record.

"The crowds in Seward are probably the biggest you ever see at (a running or skiing) event in the United States," Norris said. "You're racing in front of a bunch of Alaskans, and having that many family members and friends at the race made it that more special."

An early version of this story misstated David Norris' time this year at Bird Ridge.