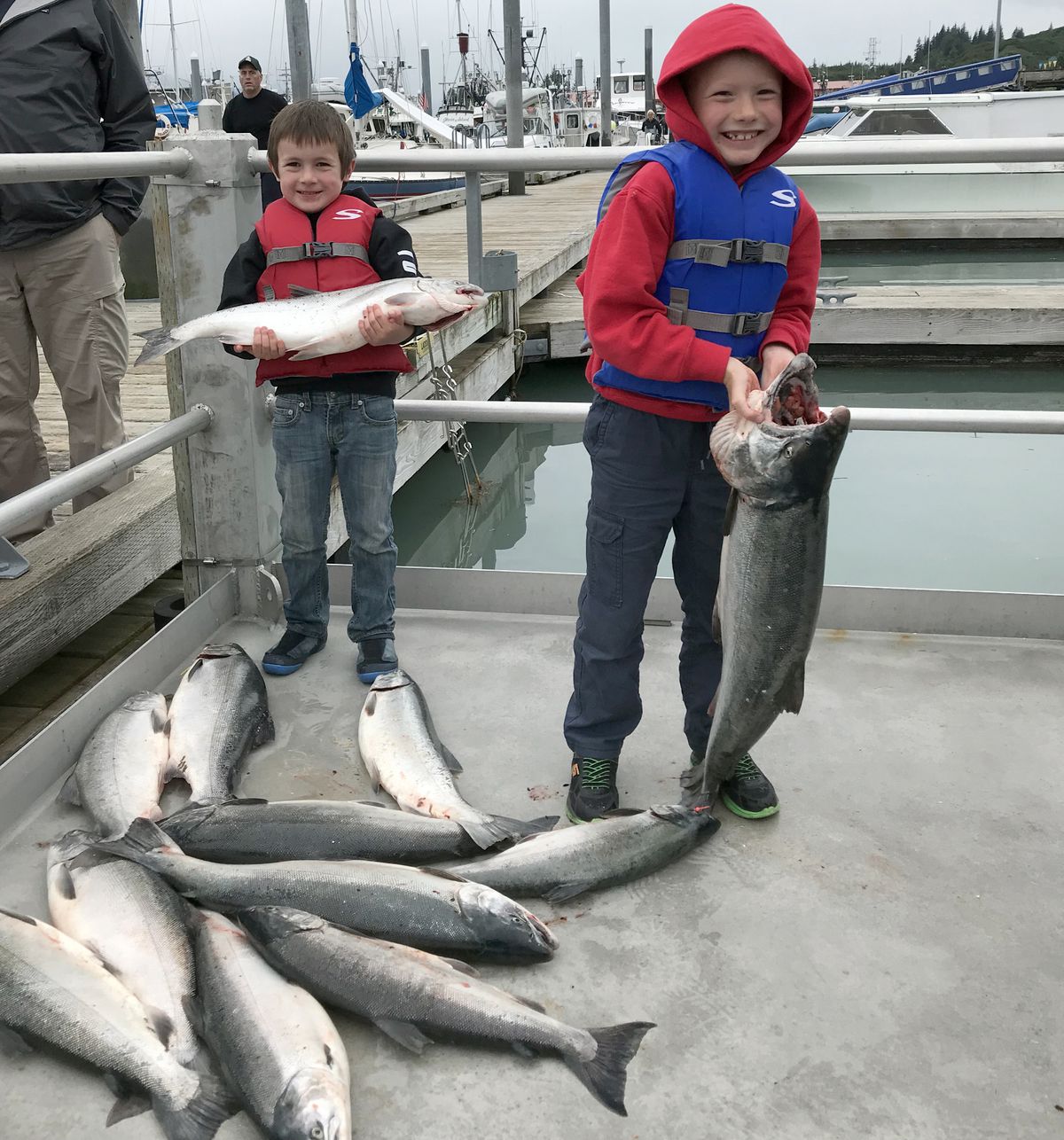 Eight-year-old Aksel Hutchinson (right) is leading the Valdez silver salmon derby that ends Sunday at noon. His brother Gauge is on the left. (Photo provided by Valdez Fish Derbies)

Eight-year-old Aksel Hutchinson (right) is leading the Valdez silver salmon derby that ends Sunday at noon. His brother Gauge is on the left. (Photo provided by Valdez Fish Derbies)

Make no mistake, 8-year-old Aksel Hutchinson of Valdez is dreaming about the $10,000 he could win Sunday if his lead holds up in the Valdez Silver Derby.

"I'll spend it on a 4-wheeler and a motorhome," the third-grader announced earlier this week.

But if Hutchinson feels like a kid on Christmas Eve who can't wait to open the biggest present under the tree, he isn't letting the anticipation overwhelm him.

He said his fingers are crossed and his hopes are high that at noon Sunday his 17.28-pound silver salmon is still atop the leaderboard.

But there are a couple of days left in the derby, he noted, "and the other people are catching some pretty big fish."

Hutchinson, a student at Hermon Hutchens Elementary School, caught his big fish Aug. 11, the day of the Valdez Women's Silver Salmon Derby. The women's derby is a one-day contest that's part of the Valdez Fish Derbies, which also includes a summer-long halibut derby and a six-week coho salmon derby, both of which end Sunday at noon. The leader of the halibut derby is a 285.8-pound fish caught on July 26 by Patricia Johnson of Clovis, California,

Hutchinson was fishing out of Gold Creek with family and friends, including mom Krista Hutchinson and family friend Audra McCann. The two women had tickets for the women's derby, and Aksel and his brother Gauge were told that on this particular day, they had to wait until each of the women caught a fish.

"Aksel was chomping at the bit," Krista Hutchinson said. "If he's not watching fishing shows, he wants to be fishing. River Monsters, Chasing Monsters, he watches all of those."

After the women had their fish, lines were reset and soon Aksel was reeling in his own fish.

His mom called it "a derby fish" — that is, one that might contend for a derby prize. Krista Hutchinson would know. Her stepdaughter, Amanda Towne, was a double-winner in the 2014 derby, topping the women's derby and the overall silver derby with a 17.54-pound coho.

"We looked at it and said, yeah, we gotta weigh that," Krista said. "We have a scale on the boat and it read 17.13, and so we fished a little more and headed back in."

The catch made Aksel a daily winner in the derby, for which he was rewarded with a rain jacket and a fishing charter.

Every day since, his mom or dad has checked the standings to see if their son's 17.28-pounder is still the leader. As of Thursday, it was.

"My favorite thing is to reel the fish in," he said. "I like catching them but not eating them so much. But I eat them anyway because my mom makes me."

Stacey Walters is the eighth Seward resident to win the Seward Silver Salmon Derby. He caught a 16.73-pound coho to win the 63rd annual derby and pocket the $10,000 first-place prize.

Walters is the first Seward resident to win the derby since Earle Cagle in 2012. The last time a Seward angler won prior to that was 1980.