Poor trail conditions lead to cancellation of Knik 200, but the Tustumena 200 is a go 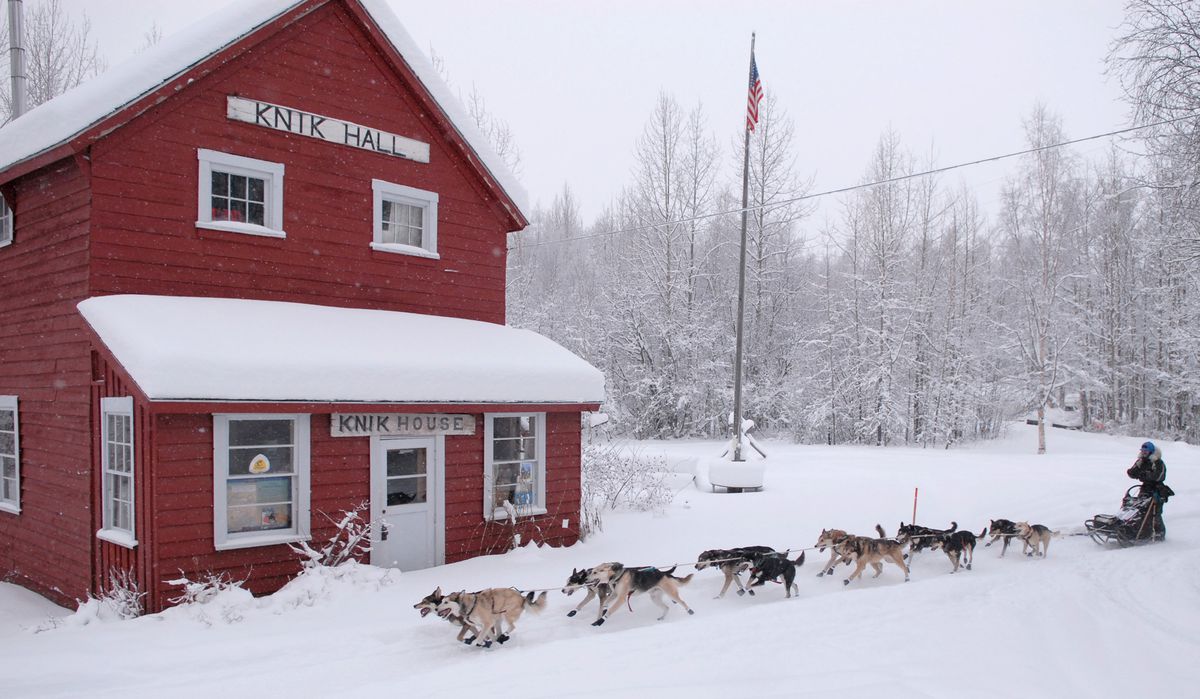 Jon Little and his team mush past the Knik museum after starting the Knik 200 sled dog race on January 6, 2007. (Stephen Nowers / ADN archive 2007)

Jon Little and his team mush past the Knik museum after starting the Knik 200 sled dog race on January 6, 2007. (Stephen Nowers / ADN archive 2007)

This year’s Knik 200 Joe Redington Sr. Memorial Sled Dog Race, scheduled to start Feb. 9, has been canceled, a victim of Alaska’s warm winter. So has its shorter companion race, the Knik 100.

This week’s above-freezing temperatures contributed to the decision, according to the race’s Facebook page.

“Though the ice thickness at Knik Lake is currently sound, other parts of the trail are not,” race officials posted Thursday. “This is especially true of the Yentna River area. We have been advised that even our planned alternate route to the Yentna checkpoint cannot be trusted, and with considerably warmer temperatures forecast for this week, this will not change.”

High temperatures are also being recorded on the Kenai Peninsula, but this week’s Tustumena 200 will start as planned Saturday. A field of 23 mushers, including four-time Iditarod champion Lance Mackey and three-time Iditarod champion Mitch Seavey, will leave Freddie’s Roadhouse in Ninilchik beginning at noon.

“The trail’s looking really good right now,” race director Tami Murray said. “There’s a couple of open-water spots that we’re dealing with, but as long as it keeps freezing at night we’re good.”

Daytime temperatures have gone above the freezing point in parts of the Kenai Peninsula where the trail runs — Murray said it was 36 degrees at Freddie’s as she spoke Thursday afternoon. But it’s been below freezing at night, she said.

“We’ll just tell (the mushers) to take it easy and run at night,” Murray said.

With a modest purse of $15,000 at stake for the top 10 finishers, she said she doesn’t think anyone will take risks if the trail is soft or there’s open water.

Trail conditions have been a concern for the Knik 200 for the last couple of months. In early December, officials pushed back the original start date — Jan. 5 — by more than a month in the hope conditions would improve. They didn’t.

Next year, according to the Facebook announcement, a new route will be put in using areas less vulnerable to warm weather.

“Establishing and maintaining a safe trail from the race start to the finish line has become a recurring challenge for the last several years,” officials said. “… It is for this reason that we have already begun to determine an alternate route that will be less vulnerable to warmer and inconsistent winter temperatures.”

Additionally, the post said, there will be no more postponements like the one that moved this year’s race from January to February. Such postponements create too much extra work for volunteers as well as conflicts with other races.

Two years ago, the Tustumena 200 moved its traditional start and finish line to higher elevations in recognition of warmer winters. For 30 years, the race began and ended in Kasilof; now, Kasilof is a checkpoint and the start and finish are at Freddie’s.

This year, both the Knik 200 and the Yukon Quest have been impacted by poor conditions caused by higher than usual temperatures in Alaska and Canada’s Yukon Territory.

The Yukon Quest 300 recently lopped off 100 miles from next month’s race because of poor conditions, turning it into a 200-mile contest.

A couple of days later, the 1,000-mile Yukon Quest cut the 77-mile run from Braeburn to Carmacks because there’s not enough snow. Instead, teams will be trucked between the checkpoints.

Another mid-distance race is also missing from this year’s calendar — the Northern Lights 300, which went out of business because of low participation. The race, which used to start in Big Lake, was canceled last year because not enough mushers signed up. Organizers later decided to end the race entirely.