The traveling Streepers -- 46 dogs, 5 humans -- are back at Fur Rondy, and setting the pace 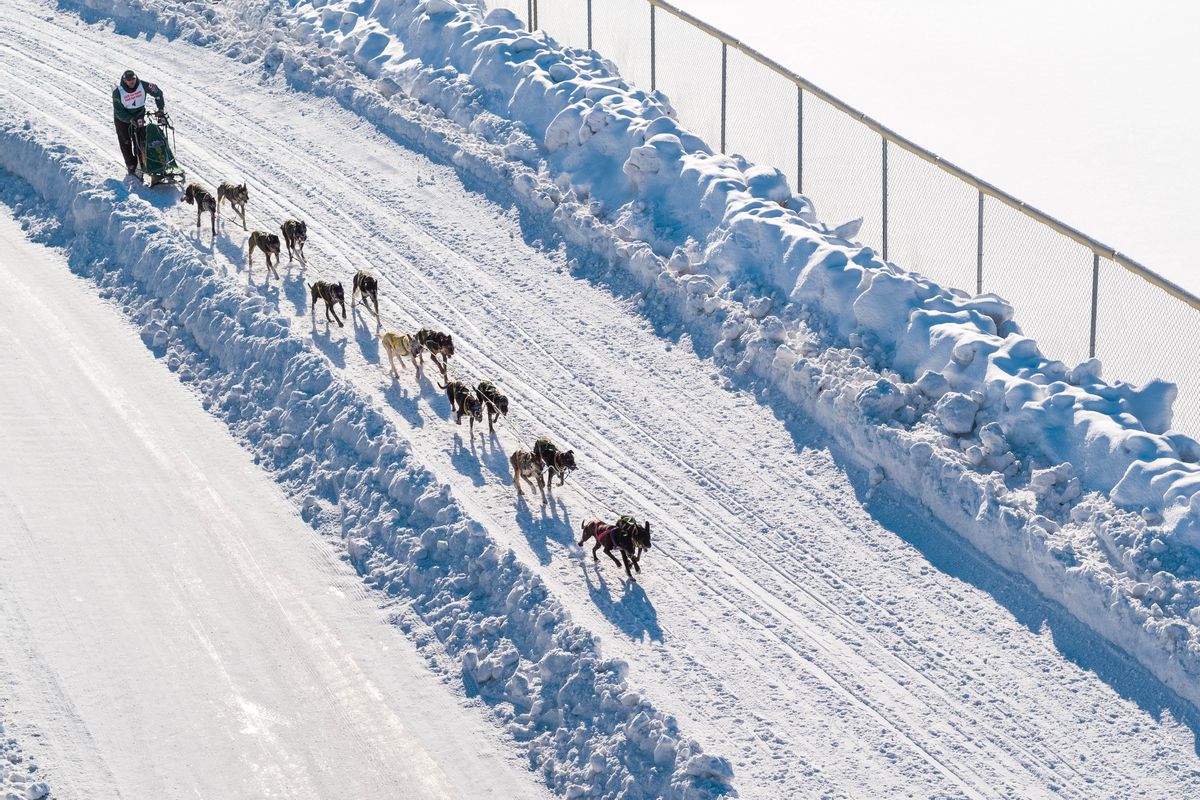 He can also go the distance. Especially if his mother-in-law is there to help.

Maria Gladh is part of the 46-dog, five-person traveling sled dog juggernaut known as Streeper Kennels, which is in Anchorage this week for Fur Rendevous.

Gladh is the mother of Lina Streeper, Buddy’s wife. She’s from Sweden but each winter she snowbirds in Canada, where she spends two or three months playing nanny/grandma to 8-year-old Alva and 6-year-old Clara so Buddy and Lina can train and race sled dogs.

“I’m here for the girls,” Gladh said. “I have nothing to do with the dogs. I’m just the grandma.”

Streeper Kennels is located in Fort Nelson, British Columbia, and the Streepers log miles the way it collects championships.

Two weeks ago the family was in Whitehorse, Yukon, for a two-day race. A month ago before that they were in Wyoming for the start of the nine-day Stage Stop race. When they leave Anchorage, they’ll head to Fairbanks for the Open North American.

“This is our life,” Lina said Friday afternoon after a clean run on the first day of the three-day Rondy race. “The girls are good truckers.”

The crew travels in a rig that takes up much of a city block. There’s a roomy, extended-car truck for the people – Buddy drives, Lina rides shotgun and grandma and the girls sit in the back seat, where there are ample movies and snacks to help pass the time.

Attached to the truck is a dog box big enough for 46 dogs, which travel two per compartment. Hitched to that is a big trailer that carries dog food, race sleds, race gear and regular-life gear for a family of five on a long road trip.

The family’s current road trip started Monday in Fort Nelson and included an unexpected layover at Laird River Hot Spring. The truck had a flat tire, and the Streepers had to stay overnight until a replacement rim and wheel arrived.

They spent Tuesday night in Tok and reached Anchorage the next afternoon. Their temporary home here is hotel that’s cool providing parking-lot space for the big rig and all of those dogs.

Gladh might know gee from haw, but she doesn’t know Skeeds (a Streeper team dog) from Odessa (a Streeper lead dog).

“I have no clue. They all look alike,” she said.

Alva and Clara know the difference. Skeeds was on Clara’s team a couple of weeks ago in Whitehorse, when she and Alva finished 1-2 in the kids’ race.

Clara sounds like a wizened dog driver as she assesses Skeeds’ attributes.

“He’s smart and he always knows which way to go,” she said. “And he eats good.”

Based on their results, the Streepers have plenty of smart dogs. Last winter, Buddy and Lina finished first and second at the North American Open in Fairbanks and first and sixth at Fur Rondy. They’ve had a good run at the Wyoming Stage Stop race, winning eight championships since 2010; this year, Lina was leading until the sixth of seven stages, when she and a few other front-runners took a wrong turn and wound up going an extra 16 miles. She wound up in eighth place overall.

After an adventurous run on Friday, Buddy had a dream run Saturday to vault from fourth place to first place. He won the heat in 1 hour, 24 minutes, 8 seconds -- the fastest time over two days and one of two sub-1:25 times. On Friday, Salcha’s Amy Dunlap drove a 12-dog team to first place in 1:24:18; on Saturday, with 11 dogs, she had the eighth-fastest time to slip to fourth overall.

Fur Rondy got off to an exciting -- make that too exciting -- start on Friday for Buddy. A rope broke at the last minute and by the time he fixed things and got to the start line he had 30 seconds to spare. Then, about 20 minutes into his run, he had to stop to untangle a dog near the front of his team. The fix took about 25 seconds, he said, a span during which he quickly said hello to each of his dogs.

“Normally I do that at the start -- say hello to everyone so the dogs get to see me,” he said. Because he was so late getting to the start line on Friday, he didn’t get to do that until the tangle forced him to stop near Tudor Road.

This story has been corrected to update the number of dogs each musher drove Saturday.