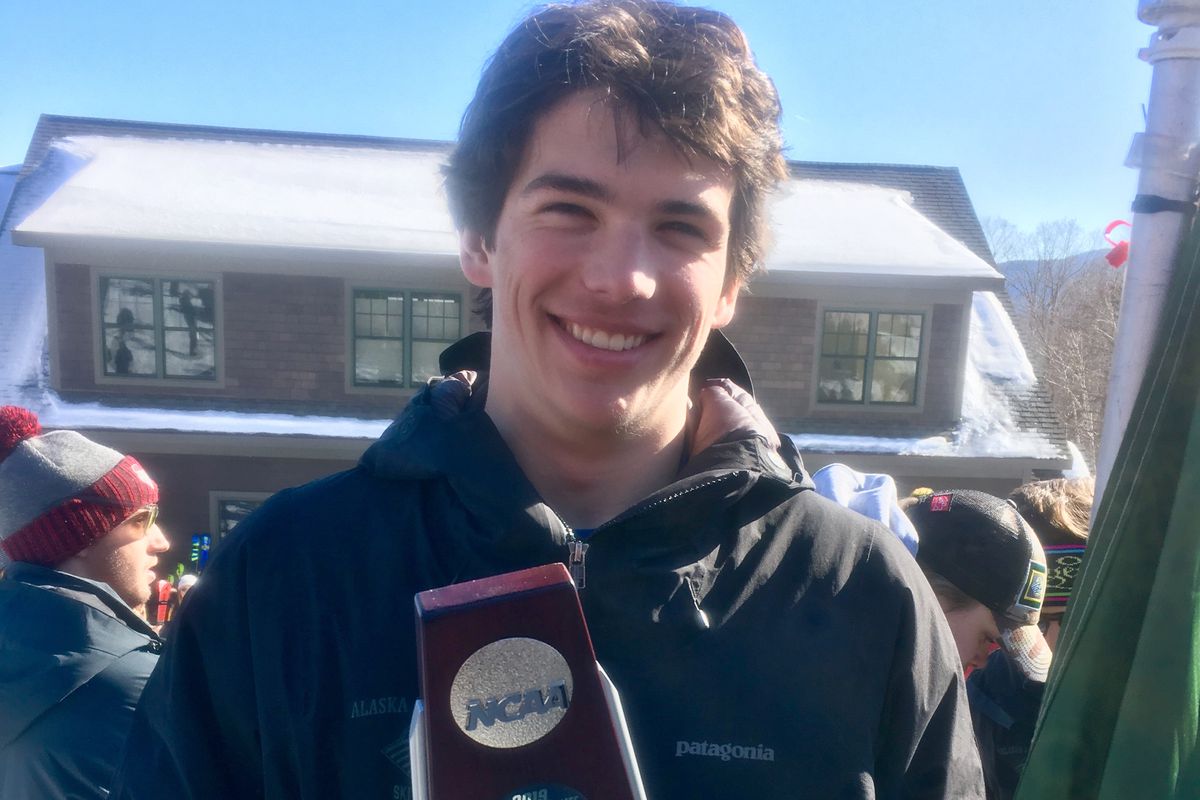 UAA freshman Liam Wallace holds the trophy he was awarded Saturday for his runnerup finish in the men's slalom race at the NCAA Ski Championships in Stowe, Vermont, on March 9, 2019. (Photo provided by UAA Athletics)

UAA freshman Liam Wallace holds the trophy he was awarded Saturday for his runnerup finish in the men's slalom race at the NCAA Ski Championships in Stowe, Vermont, on March 9, 2019. (Photo provided by UAA Athletics)

UAA freshman Liam Wallace nearly gave his coach a heart attack with a near-disaster on his second run but recovered so well he wound up with the silver medal in the men’s slalom on the last day of NCAA Championship action Saturday in Stowe, Vermont.

Wallace, from Alberta, Canada, was UAA’s second skier to win silver during the four-day championships. Sigurd Ronning of Norway finished second in the 20-kilometer classic cross-country race on Friday.

Wallace finished just 17-hundredths of a second behind winner Jett Seymour of the University of Denver. Placing 29th for UAA was Sky Kelsey.

“Our kids skied their hearts out this week,” UAA coach Sparky Anderson said.

“Obviously the big news today was Liam throwing down (a good) first run from bib 19 against guys skiing (on the) World Cup and finding himself in contention for the podium. Our coaching staff was on pins and needles waiting for Liam’s second run, and I about had a heart attack when he got back and jacked exiting a flush. He’s such a talented young athlete, and he was able to find the front of his boot and make a recovery. He crossed the finish, and I heard ‘New Leader!’ with only three guys yet to go.

In the women’s slalom, Li Djurestaal finished 25th with Georgia Burgess less than a second behind in 27th for the Seawolves

Freshman sensations Ronning and Wallace join senior Casey Wright, who finished 10th in the women’s 5K freestyle on Wednesday, as All-Americans for UAA.

UAA finished the meet eighth out of 24 teams, with Utah finishing first.