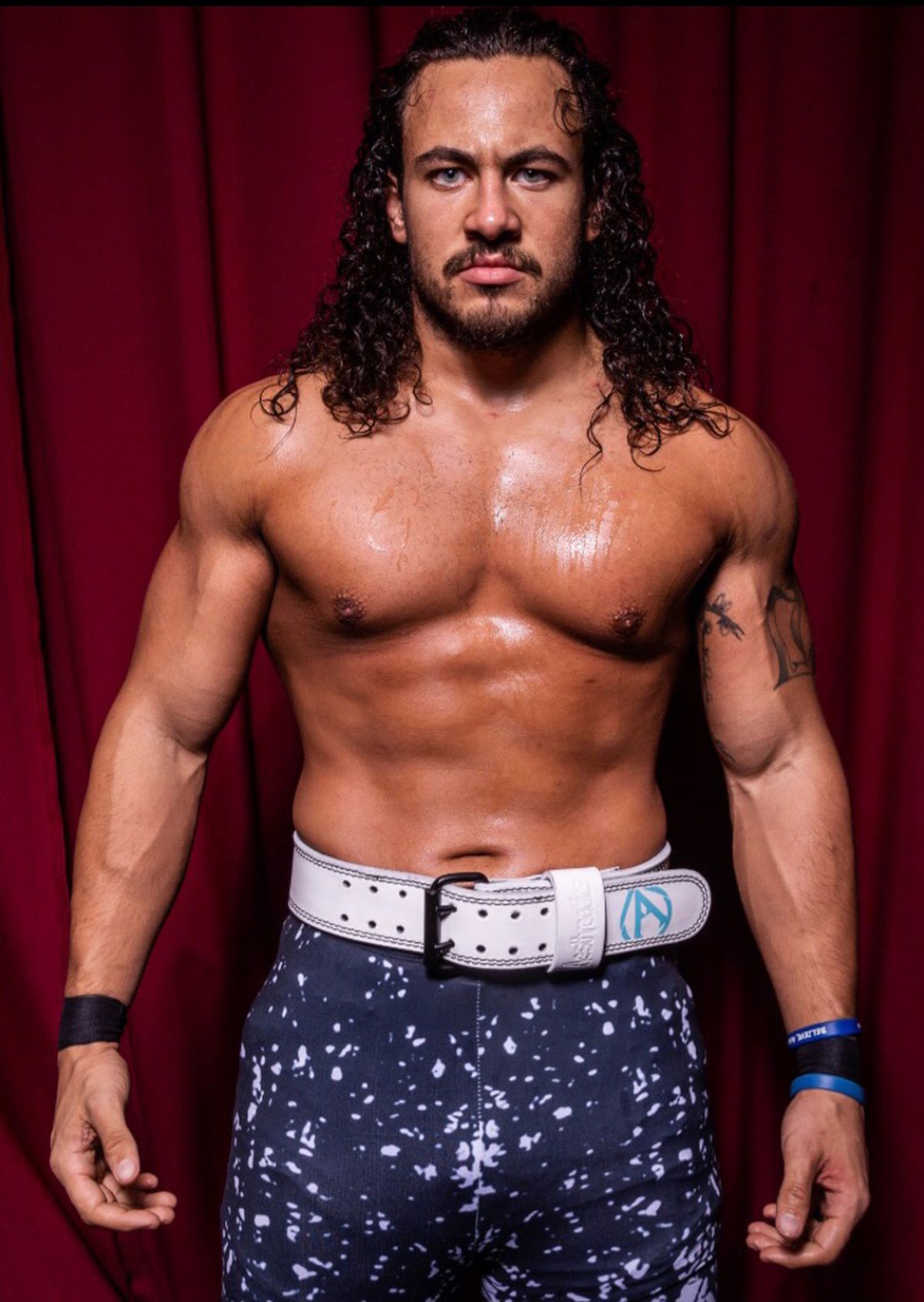 Wasilla's Deonn Richardson, aka Deonn "Iceberg" Rusman, is among the wrestlers who will appear in WrestlePro's "The North Will Remember" show Saturday night at Sullivan Arena. (Photo by Manning).

Wasilla's Deonn Richardson, aka Deonn "Iceberg" Rusman, is among the wrestlers who will appear in WrestlePro's "The North Will Remember" show Saturday night at Sullivan Arena. (Photo by Manning).

Deonn Richardson competed in football, basketball and track at Wasilla High, but he avoided wrestling for a simple reason.

“I never wanted to wear that little singlet,” he said.

These days he’s a 6-foot, 210-pound pro wrestler who goes by the name Deonn “Iceberg” Rusman and performs shirtless while wearing long tights and a weightlifting belt.

Richardson, a 2011 Wasilla High graduate, is back in Alaska for a Saturday night pro wrestling event at Sullivan Arena, where he will take on a former WWE wrestler in WrestlePro’s “The North Will Remember” show.

He is scheduled to face Chris Adonis, an Impact Wrestling star who went by the name Chris Masters during a WWE career highlighted by matches against John Cena and Ric Flair.

Richardson, 26, made his wrestling debut two years ago but Saturday will mark his first fight for WrestlePro, an independent wrestling company based in New York and New Jersey.

“It will definitely be the biggest match of my career to date,” he said Wednesday. “Just because of the building it is in, and the stature of (his opponent’s) resume.”

Richardson said there is no pre-planned storyline for his fight with Adonis, but he has an angle in mind: “Tell a story of a victory for a hometown kid,” he said.

“I have not competed in Sullivan Arena,” he added, “so that’s a huge bucket-list thing. I’ve seen the Aces play there, I’ve seen the WWE there. It’s very, very nostalgic.”

Other top names coming to town include Mick Foley, a WWE Hall of Famer who isn’t competing but will appear at a meet-and-greet before Saturday’s show. Wrestling begins at 7 p.m., with the meet-and-greet starting at 5 p.m. Tickets are still available.

Richardson, who moved to the Lower 48 a couple of years ago to attend Iowa’s Black and Brave Wrestling Academy, said he and his brother grew up watching The Rock (Dwayne Johnson) and Stone Cold Steve Austin on TV.

Richardson competed in two shows in the Valley a few years ago while saving money to pursue wrestling more seriously. He searched online for “best wrestling academies” and picked Black and Brave because one of the trainers at the Davenport gym is former WWE champion Colby Lopez, whose competition name was Seth Rollins.

Richardson moved to nearby Moline, Illinois, with fiancee Kami Lorentz, who is also from the Valley. He works at a gym during the week and travels to weekend wrestling shows about three times a month.

“I knew nothing about independent wrestling, but I learned wrestling is everywhere, in every little town,” he said.

Richardson still trains at Black and Brave, a gym that’s big on cross-fit, and he said he’s in the best shape of his life. His goal is to make it to the WWE, the sport’s biggest stage.

“It just depends on who gets the right eyes on you,” he said. “I’m two years in, and it could be tomorrow, it could happen next year, or in a couple years or a couple months if I get seen by the right eyes.”

Pro wrestling is wildly popular even though most fans know that many of the moves are choreographed and the storylines are determined in advance of a show. But Richardson said he has no idea what will happen Saturday night.

“Wrestling isn’t really about winning and losing,” he said, something he said will be especially true Saturday night. Richardson already feels like a winner just by getting the chance to come home and perform at Sullivan Arena in front of family and friends.

“Just being in that building, I’ll be the happiest kid on the planet,” he said.