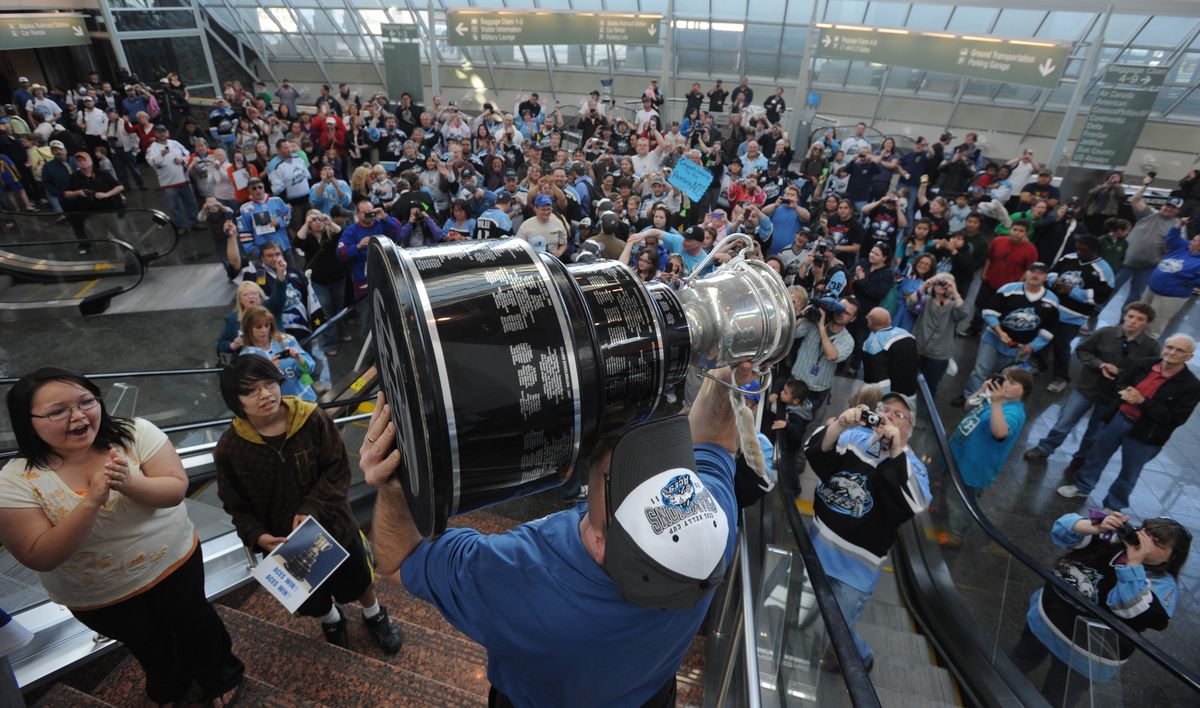 Alaska head coach Brent Thompson paused on the stairs to kiss the Patrick J. Kelly Cup in front of hundreds of fans welcoming home their beloved Aces on two levels at the airport on Sunday evening, May 22, 2011. (Bill Roth / ADN archive)

Alaska head coach Brent Thompson paused on the stairs to kiss the Patrick J. Kelly Cup in front of hundreds of fans welcoming home their beloved Aces on two levels at the airport on Sunday evening, May 22, 2011. (Bill Roth / ADN archive)

Maybe the Alaska Aces should have kept the Kelly Cup when they had the chance.

An expansion team from Newfoundland won the ECHL hockey championship Tuesday and was awarded a shiny new Kelly Cup.

A shining new trophy was needed because the team that won last year’s Kelly Cup, the Colorado Eagles, still has the hardware it was awarded for winning the league championship last year.

And the Eagles, who have since moved up to the American Hockey League, apparently aren’t giving it back.

“Dude, where my Cup?” read a headline in the Toledo Blade last week after ECHL officials showed up for Game 5 of the best-of-7 series prepared to crown the Growlers as the champions — but with no trophy to present in case the Growlers clinched the series that night.

“Colorado kept the trophy, if you can believe it,” ECHL commissioner emeritus Patrick Kelly told Toledo radio station WCWA-AM on Friday. “I’ve never heard of this in the history of hockey.”

The Eagles responded later in the day with a written statement from owner Martin Lind:

“The management of the ECHL has full knowledge of the situation with the Kelly Cup. We have made numerous attempts to return it. They have chosen to ignore our requests, therefore the Kelly Cup remains in Colorado. This is all that will be released regarding this matter.”

The ECHL fired back the next day with its own written statement — and the news that it had a new Kelly Cup trophy made:

“As stated by ECHL Commissioner Emeritus Patrick J. Kelly yesterday morning, the tradition of returning the Championship Trophy to the League was not honored by the Colorado Eagles. Despite a confirmed plan with Eagles’ management to return the Kelly Cup to the ECHL in December 2018, the arrangement was not fulfilled.

“In reaction to this, the League created a new Kelly Cup, complete with the history of players, coaches, and staff that have earned ECHL Championships over the past 30 years, including the inscription of ‘Patrick J. Kelly’ on the Cup itself to honor the man that is the trophy’s namesake. This Cup represents the fourth Kelly Cup in ECHL history, with the older models enshrined in the Hockey Hall of Fame in Toronto.

“If the Colorado Eagles do intend to return the Kelly Cup, the ECHL welcomes its return so that it too may be a part of hockey history.”

A report by the Denver Post speculated that Colorado was holding onto the trophy over a dispute with the ECHL over exit fees for leaving the league.

The Kelly Cup, a traveling trophy that goes from champion to champion, has made three visits to Anchorage courtesy of the Aces, who won championships in 2014, 2011 and 2006.

The Aces folded after the 2016-17 season, but former Alaska goaltender Michael Garteig backstopped Newfoundland to a Kelly Cup-clinching 4-3 victory Tuesday night in St. John’s. The Growlers are the first expansion team to win the Kelly Cup since 1990.