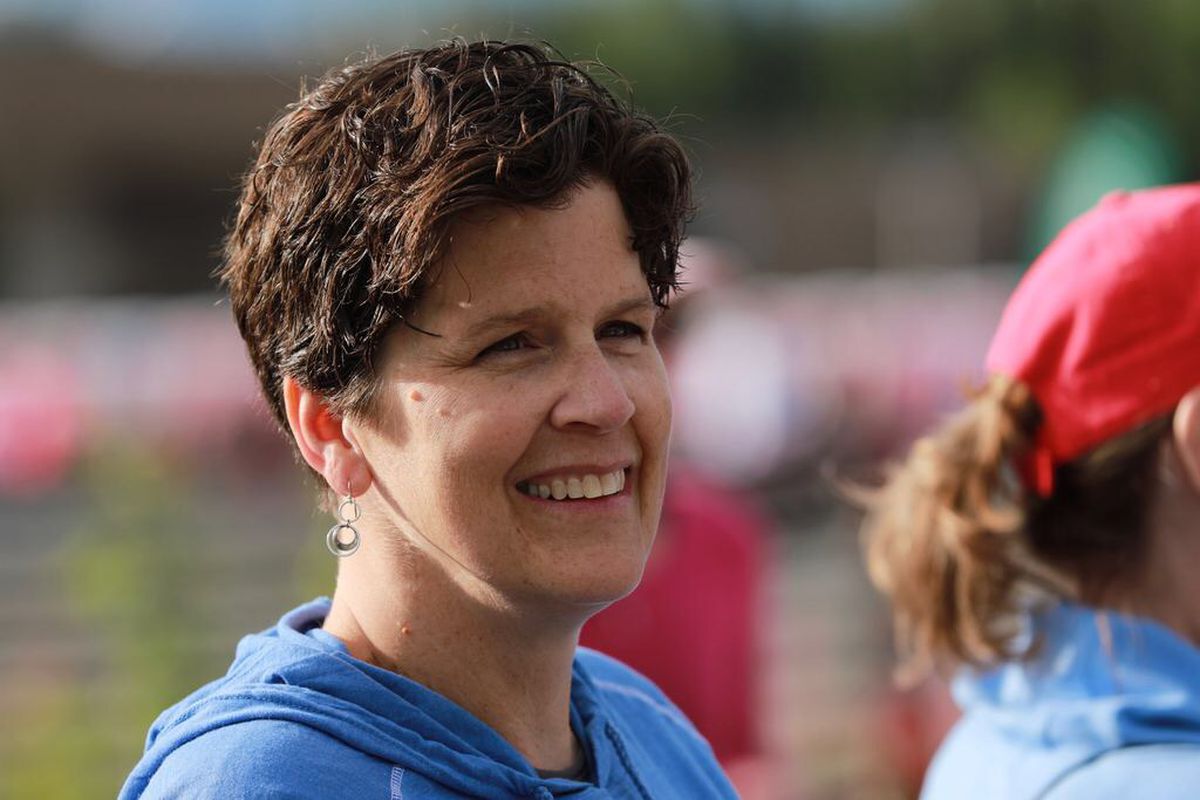 More than 17 years after they were teammates on the U.S. cross-country ski team at the 2002 Winter Olympics in Salt Lake City, Aelin Allegood of Fairbanks and Kikkan Randall of Anchorage reunited Saturday at the Alaska Run for Women.

They were the honorary starters for the all-women’s footrace that benefits breast cancer charities, and their bond goes deeper than the kind shared by former teammates who once chased a common goal.

In 2002, Allegood (whose maiden name is Peterson) was 27 years old and had given up a lucrative job in the corporate world to reignite her ski career by making a run at the Olympic team. Randall was a 19-year-old phenom at the start of her wildly successful career in ski racing.

Allegood, a two-time state Skimeister from West Valley High, the nation’s top-ranked junior from 1992-94 and an NCAA All-American at Northern Michigan, was diagnosed in December, about two months before Randall won the Olympic gold medal in the team sprint in Pyeongchang.

Randall, the most decorated nordic skier in U.S. history, was diagnosed about three months after her Olympic triumph.

Randall’s fight against the disease was waged publicly. Media from Alaska and beyond — ESPN, The New York Times, USA Today and more — documented her chemotherapy treatments, her hair loss, her post-surgery workouts.

Allegood’s battle was less visible. Fairbanks rallied around her, but her time in the Olympic limelight had come and gone. She is Alaska’s lesser-known Olympic-skier-turned-survivor, but like Randall she has a story and a message to share.

Her mantra? Self-exams save lives. And MRIs sometimes find what mammograms miss.

“I was in the shower and I felt a lump under my armpit. It was a lymph node,” said Allegood, who is raising a son and daughter with husband, Luke Allegood. “I went to my primary care doctor and she said, ‘You just had a mammogram but let’s have another.’ "

The mammogram didn’t show anything. But the lump and Allegood’s family history — a paternal grandmother and paternal aunt both had breast cancer — led to an MRI, which revealed a tumor.

“That’s where the self-exam comes in too. Just be aware it can be anywhere, because we don’t think of breast cancer under our arm.”

“What there’s been a push for more recently is to identify women who are high-risk for breast cancer and at least let them know they meet the criteria for additional screening with a breast MRI,” she said.

Providence Imaging routinely asks women who come in for mammograms to fill out a form about their family and hormonal histories. Nine percent of those who take part in the screening process are in the high-risk category, Coolidge said.

“About a month later my OB-GYN called and said they heard from the breast center, and based on this screening process they do that I was high risk — I had a 25% risk of developing breast cancer,” Baldwin said.

An MRI was recommended, and it showed a small tumor. Baldwin had stage 1 breast cancer.

“It probably would have shown up at my next mammogram,” she said, “and by then it would have been much bigger and would have spread to my nodes. This was a lifesaver, believe me.”

Baldwin works for Providence’s Cancer Center as the director of the service line. She said her case was presented at one of the center’s weekly breast cancer conferences “because there are a lot of primary care doctors that would not send their patients for MRIs because it’s expensive and they don’t think it’s worth it. But clearly there are cases where this is how it’s diagnosed.”

“But it’s important to know — a little caveat here for you — that most breast cancers diagnosed today do not have high-risk factors or a family history,” Baldwin said.

Allegood said the shock of her diagnosis was accompanied by gratitude for those who provided her with support and positive vibes.

“There were two phenomenal women I know who were about a year and a half ahead of me in the process, and it was so great because they were doing so well,” she said. “It’s so neat to see somebody who had just come through the fire and was on the other side, horseback riding and skiing and everything.”

Soon after her diagnosis, Allegood heard from Randall, who had yet to be diagnosed herself.

“She heard about me and she had all the members of the U.S. Ski Team sign a bib and she mailed it to me,” Allegood said.

“There was another time too our paths converged — I was watching at 1-something-a.m. the gold-medal (team sprint), and I had literally had chemo that day,” she said of the night when Randall and Jessie Diggins won Olympic gold. “So here I am, downstairs on the couch, I’m bald, and I’m just sobbing with joy and it made all of it go away. What cancer? There wasn’t any chemo in my body for those minutes.”

Randall said when she heard Allegood had breast cancer, she couldn’t believe it. “I know she’s healthy, I know she’s young,” she remembers thinking.

A couple of months after her gold-medal moment, Randall learned she had breast cancer too. She said Allegood was the second person she told. Allegood’s response to Randall’s news was much like Randall’s response to Allegood's news.

“No, no, no,” she thought when she got the text from Randall. “This is the wrong person. How did her account get hacked?"

“Kikkan is the best teammate in the world," Allegood said, "but that said, I wouldn’t want her on this team.”

Since then, the two have shared photos and messages about their experiences. One day Randall texted a photo of herself at an airport, wearing a white surgical mask to guard against germs, a wig and a pink T-shirt.

“I had the same exact picture of me,” Allegood said.

Randall, 36, has come back with a vengeance. She placed third in Saturday’s race, one of only three women who broke the 30-minute barrier in the five-mile race. Allegood said that when the two embraced before the race, she could feel how strong Randall was.

Allegood, 45, said she did a 9-mile hike last weekend and that “things are great.” After blowing the starting horn for the 1-mile event, she danced around in the start area, jogging a few yards with some of the women, then retracing her steps to greet other participants.

It was her first time at the Alaska Run for Women, which dates back to 1993, and the day before the race she talked about what it meant to be chosen as an honorary starter.

“To have the opportunity to greet people who are connected in who-knows-what-ways to this particular fight? It’s so empowering, so strengthening, so comforting," Allegood said. “We’re all just setting aside this time to celebrate the battle and the strength, and to celebrate the research and the advancement. There is much to celebrate amidst the grief.”