Alaska trapshooter Corey Cogdell-Unrein is back on the range, with a baby 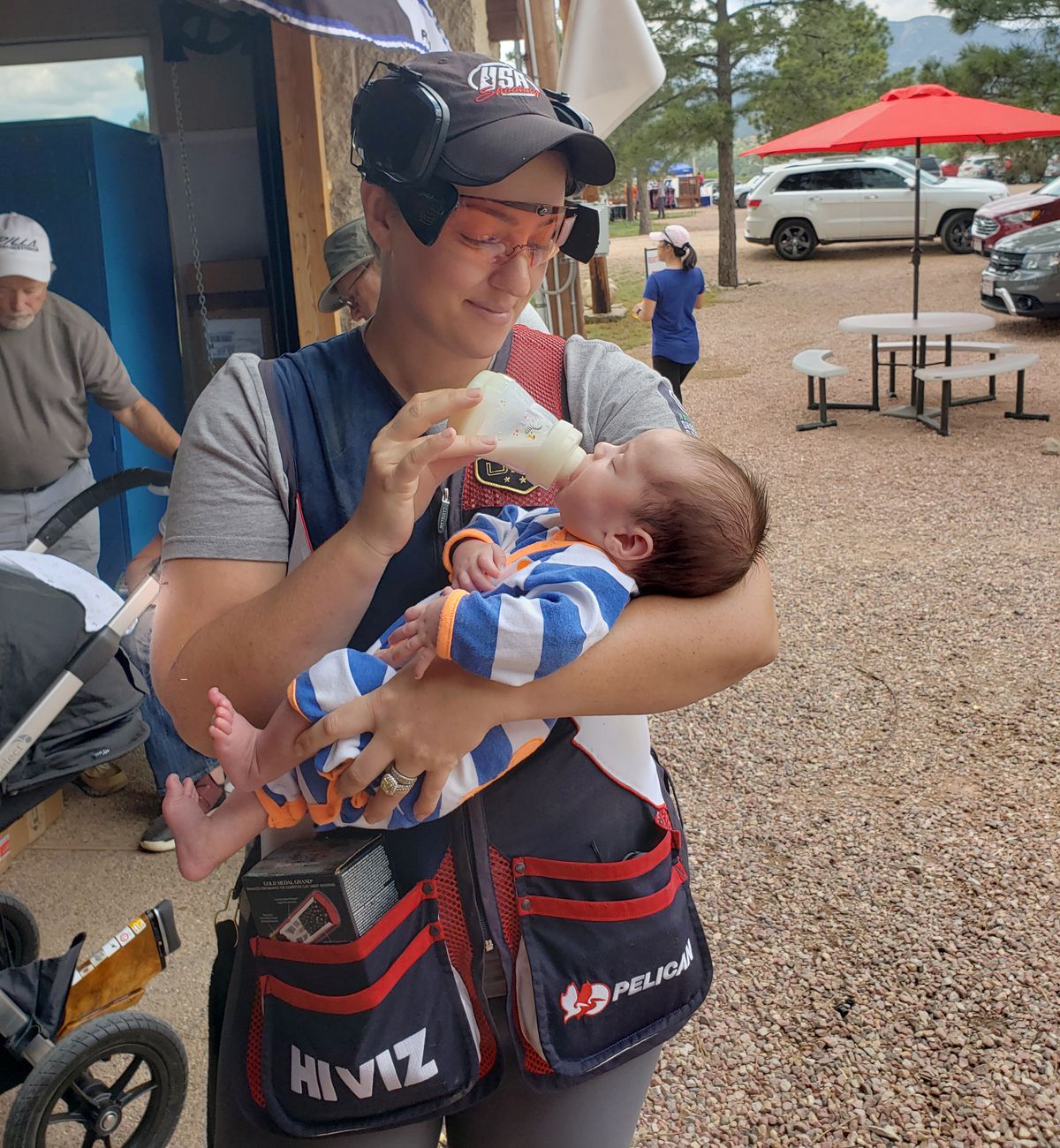 Lane Carter Unrein is 10 weeks old and he really is a good little boy.

He was born 24 days before his due date, thereby allowing his mother to go back to work in time to begin her quest for a fourth straight Summer Olympics appearance.

She was the top shooter in qualifying competition, firing 238 out of a possible 250 to finish two points ahead of anyone else — an effort that included two consecutive perfect rounds, meaning she hit 50 targets in a row without a miss.

During breaks, she tended to Lane, who attended the four-day competition in Colorado Springs wearing baby-sized earmuffs to protect his hearing.

Lane was due April 26 but arrived April 2. He weighed in at a robust 6 pounds, 15 ounces, and is already up to 12 pounds — no surprise, perhaps, given his dad, Mitch Unrein, is a defensive lineman and eight-year veteran of the NFL.

Cogdell-Unrein grew up in Eagle River and started her shooting career at the Birchwood Recreation and Shooting Park in Chugiak. She was a member of the U.S. shooting team at the 2008, 2012 and 2016 Summer Olympics, winning bronze medals in trapshoot in 2008 and 2016.

She spent time at the practice range through her entire pregnancy — “I shot two days before I gave birth,” she said — and although she skipped World Cup competitions, she competed in a USA Shooting event in February, when she was about eight months pregnant.

By then, she said, pregnancy was taking its toll.

“I had some really good rounds and I had some really bad rounds,” she said. “It was becoming very difficult to shoot consistently, and just the fatigue factor of being on my feet all day. Having a 30-pound counterweight affected my ability to move and rotate and that kind of thing.”

Her pregnant belly didn’t get in the way, she said, but her stance and posture was impacted and she had to deal with back pain.

Cogdell-Unrein said she scaled back on training in the final weeks of her pregnancy, going from five or six days a week at the range to three days a week. And yes, she spoke to doctors and midwives about potential impacts on her unborn child, especially his hearing.

“They said you have to think about the baby being in a pool,” she said. “If you imagine being at a pool party and there’s music going on and people talking, and then if you go under the water you can still hear what’s going on, but everything is muffled.”

At last week’s national championships, Mitch Unrein was on hand to take care of Lane while his wife was competing. Between rounds, Cogdell-Unrein fed and otherwise tended the newborn, finding privacy in an athletes lounge where she could breastfeed him.

The days were long and hot, and lightning delays stretch some days to 10 hours or longer, Cogdell-Unrein said. And no matter how hard she tried to focus on what she was doing when it was time to compete, she was always aware she had a baby on board.

“It definitely posed some new distractions that I had to work through,” she said. “I’m getting ready to shoot and you hear him start to cry and that motherly instinct kicks in — that maternal instinct of ‘My baby’s crying, I want to go check on him,’ even though realistically I know he’s OK.

“One of the hardest things for me was just the sleep aspect. I’m getting up every two-and-a-half, three hours a night to feed him, and I’ve been running on fumes the last two months doing that. Having to spend 10-hour days out at the range (is) just mentally and physically exhausting when I’m already running on fumes.”

Cogdell-Unrein left the national championships with mixed feelings about her performance. She was disappointed by her showing in the six-woman finals, where her score of 23 placed her fifth overall.

“Fifty straight, that felt great,” she said. “I’d been shooting really well in practice and about a week and a half before I ran 100 straight in practice. It was the first time I had run 100 straight since well before I was pregnant, so I knew I was shooting well.”

Cogdell-Unrein missed several big international competitions during her pregnancy, which she said makes her feel like she’s playing catch-up as the 2020 Summer Olympics near. The first part of the U.S. Olympic Trials are in mid-September.

But lost time on the shooting range is a small price to pay for becoming a mother, she said.

“I think balance is key in life, so I think having this addition to our family has brought more balance to my life,” Cogdell-Unrein said. “I have to take some of my focus from shooting and give that time to Lane. I think it’s helped me really hone in and focus when I’m on the range, because I have limited time there. It’s helped me be more efficient and effective in my training.

“I also think it’s made me more mentally strong. Just the birth process in itself is extremely mentally tough, and I had an all-natural birth. … Things that seem tough don’t seem so tough after you’ve been through that.”