Will they or won’t they? Mount Marathon top contenders grapple with smoky situation 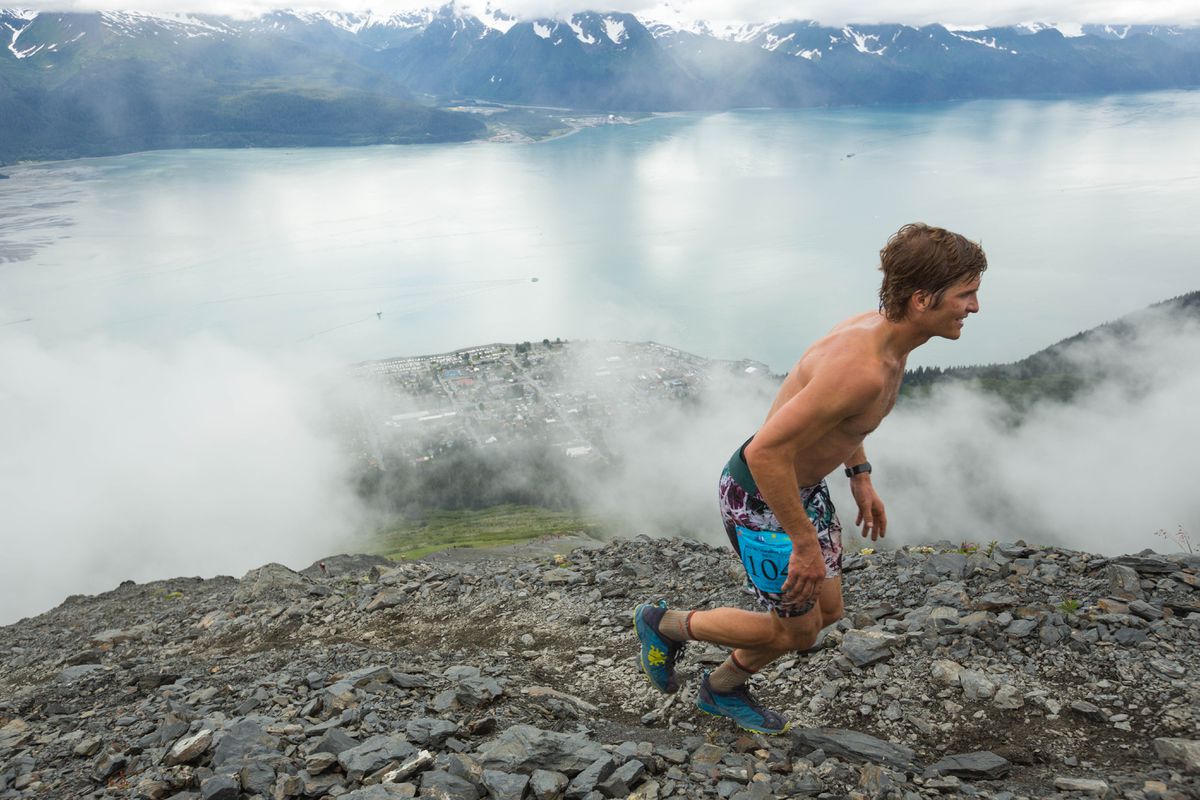 David Norris, shown here charging up the mountain on his way to a record time in the 2016 Mount Marathon Race, is uncertain about racing Thursday. (Loren Holmes / ADN archives)

David Norris, shown here charging up the mountain on his way to a record time in the 2016 Mount Marathon Race, is uncertain about racing Thursday. (Loren Holmes / ADN archives)

Usually the pre-race talk about Mount Marathon is who’s running and who’s going to win. This year it’s all about who’s going to skip Alaska’s most famous footrace.

With smoke from a wildfire prompting health concerns in Southcentral Alaska, race officials Tuesday issued an unprecedented deferral option to runners who want to skip the race because of poor air quality. The option will allow runners to defer their 2019 entry to 2020 — a big deal given how difficult it can be to gain a spot in Mount Marathon, which has a limited field.

Runners can delay their decision until one hour before their race starts, said race organizer Jen Leahy of the Seward Chamber of Commerce. That’s the deadline for turning in bibs at race headquarters (Rae Marine Education Building at 125 3rd Avenue, on the way into town).

Leahy said race officials are asking parents to consider health risks for kids entered in the junior race, because children and teenagers are more likely to be affected by health threats from smoke, according to the Centers for Disease Control and Prevention. A decision to cancel the junior race “will be made close to the start time,” Leahy said.

A number of elite runners, including men’s record-holder and defending champion David Norris, are considering skipping the race. Many of them are also World Cup skiers, and they’re making choices based on what’s best for them come ski season.

“Air quality has been a hot topic with our athletes lately,” Erik Flora, coach of the Alaska Pacific University cross-country team, said by email. “We have been adjusting training to work hard when the air quality is appropriate and move indoors for training or reduce intensity when air quality is lower.

Two top runners are out no matter what — defending women’s champion Jessica Yeaton is injured, and 2017 men’s champion Scott Patterson scaled back on running races this summer as part of his preparations for the ski season.

Here are thoughts from some other top contenders, shared via text:

I’ve spoken with a local doctor as well as Erik Flora and both are suggesting I take the smoke very seriously. Mount Marathon is a really exciting race and I want to participate, but I’m not interested in damaging my lungs with my major goals as a World Cup skier.

I want to race, I want to beat my personal record to the top, and I want to share the fun at the finish line with all the others who raced. It will be a tough decision, but I have to consider next week, next month, and next winter when making the decision to race.

Can’t decide anything until I am down there, Thursday. In the spirit of Mount Marathon, the universe has thrown us a curve ball. She’s a wicked mountain that’s always one step ahead. Touche I say; I am ready to show her one step better!

ROSIE FRANKOWSKI, first to the summit and seventh to the finish line in her race debut last year:

The smoke is very concerning to me. I won’t make a decision until July 3rd as to whether I will head to Seward or not. I don’t even want to camp overnight in smoke, and if it is smoky I won’t race. It will not be an easy decision because I did all the mountain races to qualify for Mount Marathon this year, and I want to go for the uphill record. … But at the end of the day, it’s just one race and I believe the potential health impacts of smoke, especially wildfire smoke, are very hazardous to your lungs and can create long-term damage.

I think it is crazy to imagine volunteers wearing masks while runners run and breathe heavily next to them up the mountain. I also believe kids should be extra cautious and that holding a junior race is almost insane if it’s smoky.

I know people won’t agree with my decision and will want to race, but I have larger goals in skiing and there are plenty of running races here in Alaska and the Lower 48 that I want to crush in my future. And honestly, as an event planner in my day job, I’m shocked the insurer of Mount Marathon and the hired medical safety crews aren’t concerned. I hope if they do hold the race, with the heat and the smoke, they prepare for additional medical concerns. I’m just praying for a miracle wind to come and we can all go run and celebrate the 4th!

I can’t wait to race Thursday, and Crow Pass as well! Smoke or no smoke!

For me, it will be a game-day decision. I will probably go up the mountain no matter what but if it’s super smoky I will go slow and perhaps wear a mask.

I’ve definitely heard a lot of “we need to be Alaskan tough” and “this race has a lot of inherent risk, the smoke is just another one of them.” Personally I think this attitude is shortsighted. I have no doubt the race will go on but I encourage people to take their long-term health into consideration. Last winter a bunch of Americans went to China for ski races where it was really polluted. Many had a post-race hack and sickness for weeks, even two months afterwards. Anyone with asthma or other lung sensitivities, including adolescents with still-developing lungs should take extra precaution.

So, I encourage Alaskans to do the independent Alaskan thing and think for themselves rather than getting caught up in the pomp and circumstance of the whole situation. Sometimes the courageous decisions are the unpopular ones — ie, choosing to not “race.”

I’m gonna head down there as planned and feel it out a little bit. As of now I’m planning on racing but if the smoke is really bad I am OK with making the decision to not race. It’s nice being really young in the race (and) not feeling like I have a lot of pressure to show up.

But that being said it’s a race that I really really love doing … and I feel like I’m better prepared for it than I ever have been so I would love to have a full field there to be able to throw down against and see where I can end up.

But at the end of the day I am still a skier first so if I felt like the smoke would have some negative long term impacts to race in I would probably make the call to not race. … I think it’s awesome that some of the top contenders like David (Norris) and Rosie (Frankowski) are able to make the decision to not race if it comes to that. That’s not easy to do when there is as much hype surrounding their presence in the race as there is. Really sets a good bar for athletics in Alaska.