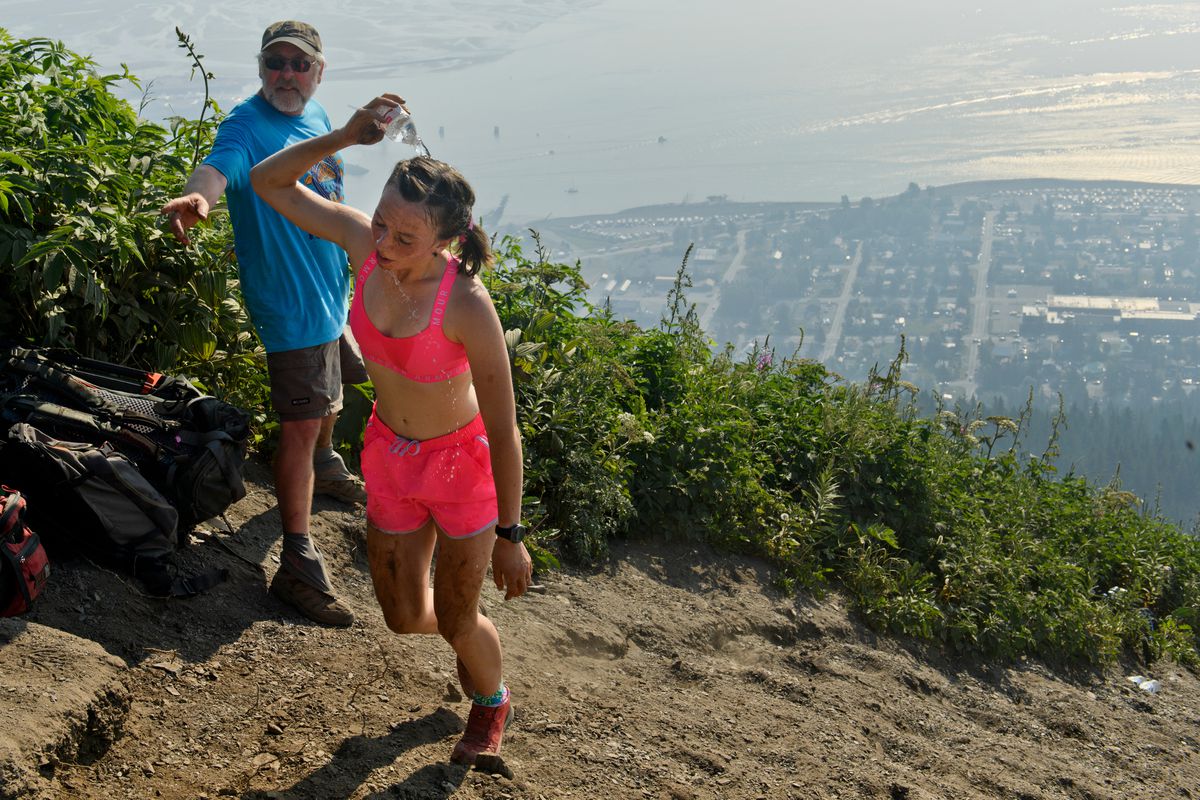 Sixteen-year-old Nowelle Spencer barely had time to pee before joining the rebellion last Thursday in Seward.

She thought the Mount Marathon junior race had been cancelled — and it had been, because of poor air quality from wildfire smoke.

By the time she learned a bunch of kids were going to race anyway, she had mere minutes to join them.

Spencer got to the start line just in time to join about 80 kids who charged up and down the mountain anyway in an Independence Day display of Alaska independence.

She got to the finish line in time to make non-history.

Spencer was the top girl in the race. According to both the time on her watch and the time registered by a non-official at the finish line, she ran one of the fastest times by a girl in the history of the junior race: 31 minutes, 32 seconds.

No stranger to Mount Marathon history — yes, her dad is Bill Spencer — she did some post-race research and discovered her time ranks third all-time, behind Allie Ostrander’s 28:54 in 2014 and Becky Forbes’ 31:26 in 1976.

Because the race never happened officially, Spencer’s victory and fast time won’t show up in the annals of Mount Marathon. But the story of how she managed to get to the start line is worth preserving for history.

“I was sitting by the car sewing gaiters onto my shoes and I got the news the race was canceled,” Spencer said the day after the race. “I was pretty devastated, because I raced it for the first time last year and decided I wanted to come back and win it.

“I started training in January for this and now I realized there was no race at the end of it. I’m sitting there with one shoe on and I don’t know really what to do. I sit there for a couple of minutes, and my sister gets a call that they’re still running the race and we have five minutes to get there.

“My sister sort of misses some speeding laws and goes down a street that’s supposed to be blocked and we got there three minutes before the race.”

There was no time to warm up, but at least Spencer had time to pee.

“We’re speeding down the street to the start, (and) I yelled ‘wait, guys, I have to pee!’ So we pulled over to the nearest outhouse so I could have my pre-race pee.”

Spencer, who will be a junior at Service High, thought she was the first girl to the spot halfway up the mountain where the juniors turn around and begin their descent. When she hit the pavement near the base of the mountain, she saw a girl ahead of her, and not knowing if the girl was in the race or not, she came up with a burst of speed to pass her.

“You get off that downhill and hit that concrete, and your legs just feel so flat and dead," Spencer said. "I think I’m winning and then all of a sudden you have to push past the pain and suck it up and go.”

Whether or not the girl she passed was part of the rebel alliance or a spectator leaving the mountain, Spencer doesn’t know. Some kids wore their race bibs, others didn’t. And there are no results, official or otherwise.

Spencer is the daughter of two world-class athletes — mom Wendy was a member of the U.S. cross-country ski team and dad Bill was a 1988 Olympic cross-country skier and is a Mount Marathon legend. His 1973 junior race record of 24:30 still stands and his 1981 senior record of 43:21 stood for more than 30 years.

Spencer said she’s not into skiing. She runs cross country at Service High but doesn’t like track — “I’m not a hamster,” she said of running on an oval — and she didn’t give mountain running a try until last year’s Mount Marathon.

“Before my first time doing Mount Marathon I was not a super-competitive person,” Spencer said. “I thought, ‘I’ll try this one year.’ I got done and it was a blast and I totally wanted to do it again.”

She began training seriously in January. As winter turned to spring, her dad started training with her. He shared tips, she said, but maybe not the kind you’d think — stuff about gaiters and duct tape and how to surf down the shale on Mount Marathon’s steep descent.

No, Bill Spencer schooled his daughter about loving the mountains.

“It was a lot of, yes, you want to train, but you also want to make sure you’re having lots of fun with your training and you’re going out and adventuring,” she said. “You’re not just training for a race — you should be training to get out into the mountains and really enjoying yourself and not getting upset if your intervals aren’t what you want them to be.”

Bill had an apt pupil in Nowelle, who said she loves mountain races but also loves “the long adventures where you’re out all day and backpacking.”

As it turned out, the daughter might have helped out the dad a bit, too.

“As he tells us, he gets slower each year as he gets older,” Nowelle Spencer said. “But he’s been training with me this spring and summer and he got faster this year.”

Bill Spencer finished 176th in 1:17:58. David Spencer, Nowelle’s brother and the veteran of nine junior races, made a solid senior debut by placing 52nd in 59:03.

Nowelle has one year left in the junior race for kids ages 7-17, and she’s eager to make the most of it. Her goal is get another personal record by beating her time from this year.

“I was two-and-a-half minutes off Allie’s record," she said. "It could be, like, a very far-fetched goal. I would be perfectly happy just making another PR.”

The thousands of spectators at Mount Marathon love to cheer Seward runners, and Thursday they had plenty to be happy about.

In the men’s race, Seward runners claimed fourth and fifth place — Pyper Dixon, a lifelong Seward resident, was fourth and Erik Johnson, a Seward transplant, was fifth. They were separated by one second at the finish line, with Dixon prevailing in 47:16.

When Seward’s Ralph Hatch died in December at age 94, Mount Marathon lost one of its greatest champions.

Hatch won the race six times — more than any other Seward runner — and his streak of five straight victories from 1946-50 is the second-best in the history of the men’s race, which dates back to 1915. (Sven Johanson holds the record with six straight from 1954-59.)

On Thursday, two of Hatch’s granddaughters race the race, according to race officials.

With his victory on Thursday, Oregon’s Max King posted one of the fastest times since the men’s race was first held in 1915 — but he didn’t match his personal best on the mountain.

King, a professional trail runner sponsored by Salomon, won in 43:39. That ties the 12th-best time in history and matches the time Tobias Schwoerer ran when he won the race in 2004.

King also owns the fourth-fastest Mount Marathon time — 42:33 a year ago, when he finished second to Alaska’s David Norris, who won in 42:13.

The 2015 was the fastest ever, and not just because Jornet set a record that stood for just one year. Five of the top 15 men’s times in race history were registered that year.