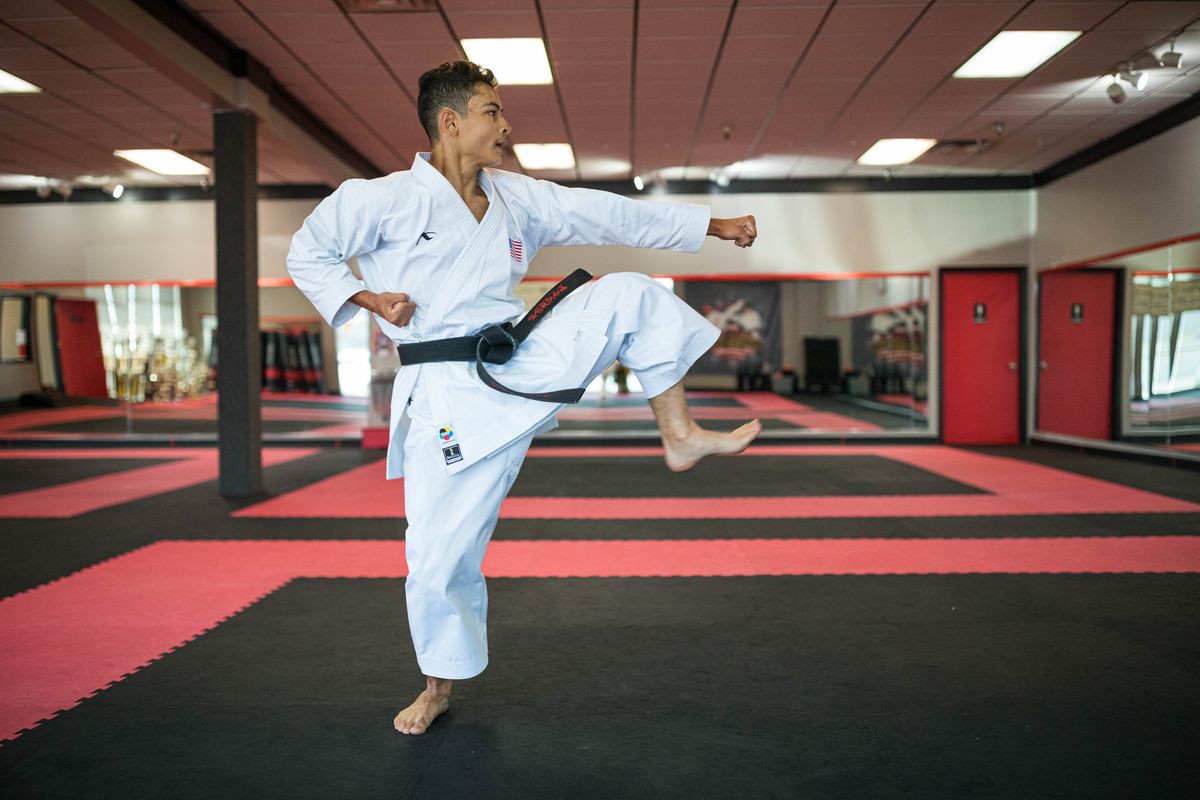 One day at school, Rickyjon Balgenorth of Anchorage used his super power to take down a bully. Some day in the future, he hopes to use it at the Olympics.

For now, karate is taking the 15-year-old to the Junior Pan-American championships later this month in Ecuador.

Balgenorth, a South High sophomore, earned a spot on the U.S. team by winning the gold medal in age-group kata competition at the USA Karate National Championships last month in Chicago. Besides capturing first place in the boys 14-15 elite division, he also tested himself in the boys 16-17 elite division, where he placed fifth.

Balgenorth packs an impressive amount of speed, power and accuracy into his 5-foot-5, 120-pound body. His field of expertise requires him to perform a choreographed series of movements that lasts two or three minutes and is far more demanding than it looks.

When he demonstrated a kata recently at Okamoto’s Karate, Balgenorth kicked, jumped and jabbed with so much speed and power that his heavy, white uniform — called a gi — made whipping noises. When he was done, he was breathing hard.

“You’ve got to do the kata as hard as you can,” he said. “If your performance drags, that’s bad.”

If your hip moves before your arm when it’s not supposed to, that’s bad. If your foot is supposed to point straight ahead and instead it’s half an inch off, that’s bad. There are lots of seemingly little things that can go bad a kata routine, which is why Balgenorth spends much of his waking hours practicing at Okamoto’s.

“To do karate at a high level, you have to train a lot,” he said.

During the summer, he tries to spend six hours at the dojo and two hours at a gym Monday through Friday. Saturday he dials it down a little, and Sunday he rests.

During the school year, he tries to put in four hours each week day at the dojo. He does schoolwork during lunch, on breaks and for an hour or two at night after Okamoto’s closes at 8:30 p.m.

The schedule works — Balgenorth is a 4.0 student with aspirations of becoming an astronautical engineer, and he’s a first-degree black belt with dreams of going to the Olympics.

“He started out with a bunch of kids with the same potential, but they didn’t have his discipline,” said Shane Bertram, a fellow black belt and an assistant instructor at Okamoto’s. “It takes a lot of discipline.”

But it will take more than discipline and long hours in the dojo for Balgenorth to get to the Olympics.

Bagelnorth is a long shot for the 2020 Games, and he knows it. He hasn’t been to enough competitions to climb the world rankings, and “for the Olympics you need to be in the top 50,” he said.

“It’s a goal, but it’s going to be really hard because I’m so new. I need to get my rankings higher,” he said.

After 2020, his Olympic dream depends on what the International Olympic Committee decides to do with karate in the long term. If it doesn’t return to the Olympics, Balgenorth still has plenty to dream about, including earning a spot on the U.S. senior national team and someday going to the World Championships.

Bagelnorth started in martial arts when he was an active 4-year-old and his mother was looking to channel that energy.

“He was a very hyper kid and very, very interested in moving around,” Josie Balgenorth said. “You need to be hyper to be into karate. Kids in the beginning, that’s how they get into it — ‘I want to kick. I want to scream.’

The youngest of three children and the only one still at home — sister Yvonne is at Penn and brother Brayton is at UAA — Balgenorth uses the family’s living room as a mini-dojo, complete with a mat to practice on, his mother said.

Bagelnorth said he often sets up a camera to record himself, whether at home or Okamoto’s. He watches himself in slow motion looking for mistakes and when he spots one he does the movement over and over until he consistently gets it right. He loves the precision and the philosophy that surrounds his sport.

“It’s a way of life, the self-discipline,” he said. “… Karate is mainly about self-defense. You shouldn’t use it just to beat people up. It’s a lot about being humble.”

Which takes us back to the bully who tried to assert himself against a smaller kid one day in gym class.

“He put me in a choke hold,” Bagelnorth said, “and I took him down. He was surprised.”

Correction: The subheadline on this article has been corrected to show the correct spelling of Rickyjon Balgenorth, not Baglenorth.