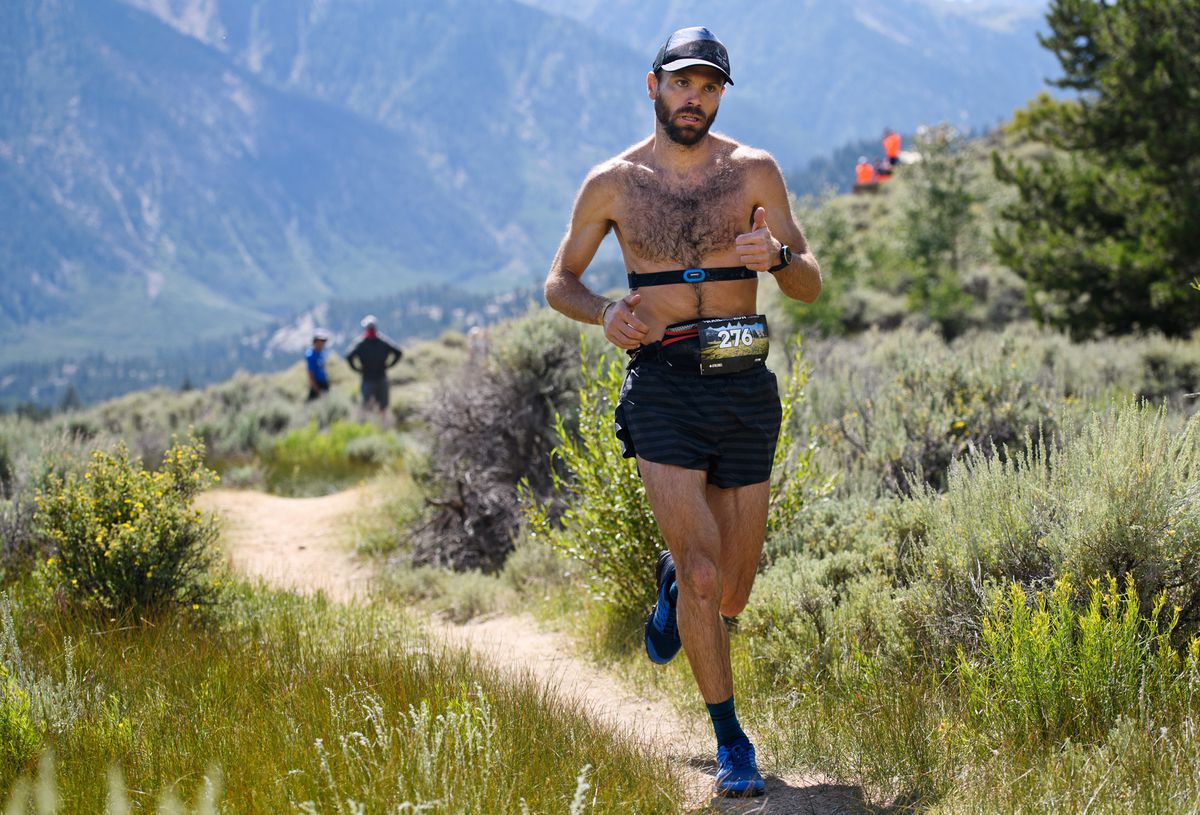 Chad Trammell reaches the Twin Lakes Aid Station area, about 62.5 miles into the Leadville 100 Trail Run near Leadville, Colorado, on August 17, 2019. Trammell was in second place at that point in the ultra-marathon race.(Marc Lester / ADN)

Chad Trammell reaches the Twin Lakes Aid Station area, about 62.5 miles into the Leadville 100 Trail Run near Leadville, Colorado, on August 17, 2019. Trammell was in second place at that point in the ultra-marathon race.(Marc Lester / ADN)

Chad Trammell’s race resume is filled with grueling athletic endeavors — a couple of years ago he earned the title of World’s Toughest Mudder — but Saturday’s Leadville 100 in Colorado was almost too tough for the Anchorage dentist.

But he suffered mightily for it. He nearly passed out at the finish late Saturday night and went straight to the medical tent. He was still suffering Sunday, the day after his 18-hour run through the Rockies.

“I can only move with my legs completely locked and straight,” Trammell said by phone. “I went to the awards ceremony and I was the only person, even (including) the 60- and 70-year olds, who needed help up on the stage and onto the podium.

Trammell finished the famous “Race Across the Sky” in 17 hours, 56 minutes, 27 seconds. He was nearly 90 minutes behind winner Ryan Smith of Boulder, Colorado (16:33:25) and less than one minute ahead of third-place Devon Olson of Steamboat Springs, Colorado (17:57:19).

Runners toil at elevations ranging from 9,200 to 12,600 feet. They’re on an out-and-back course that requires them to twice climb and descend Hope Pass, the race’s highest point at 12,600 feet.

“My quads were shot about 40 miles in and I had some cramping. The whole last 55 miles or so was just a battle against my body.”

Trammell’s lead over Olson fluctuated between 15 minutes to 25 minutes in the second half of the race, and with 12 miles to go, he led by 20 minutes.

He wasn’t. His body was breaking down, and Olson was on the move, something his support crew of fellow Alaska runners Anna Dalton and Lars Arneson knew all too well.

Runners are allowed to use pacers during the second half of the race, and during the final few miles Dalton was pacing Trammell and Arneson was giving him splits. The news coming from Arneson was not good: “Now it’s 12 minutes,” he’d tell Trammell. Then a couple of miles later: “Now it’s 10 minutes.”

With about a mile left, Trammell saw in the dark Colorado night just how much of his lead over Olson had vanished.

“I looked back and I saw his headlamp and his pacer’s headlamp, and that’s when I knew it was a real race and I had to run as hard as I could,” Trammell said.

“It takes everything you’ve got for every step. There was stabbing pain in my quads for the last 50 or 60 miles, but this was just your body rebelling against you and screaming at you to stop, and you have to overrule that at every step.

“Fortunately Anna and Lars were there, and they didn’t come all that way to see me not finish. I think they cared more than I did at that point.”

Trammell’s 20-minute lead over Olson at the 88-mile mark shrank to 53 seconds at the finish. Sunday, as he assessed his arduous day in the mountains, he pointed to two things that conspired against him.

One, he started too fast. The field of runners included a man who was chasing the course record, “and I got sucked in by him,” Trammell said. By the time the record-chaser dropped out around 45 miles, the damage had been done.

Two, the altitude took away his appetite and kept him from consuming many calories along the way.

“I had all these plans to eat at all of the aid stations but I couldn’t really eat anything. I couldn’t eat any food or even gels all day,” Trammell said. “That in addition to my legs being gone, my energy was pretty bonked.

“I knew right when I stopped that I was so light-headed I was probably going to collapse.”

And so of course he’s already thinking of doing the race again. Kind of.

“It may be too soon to ask that,” he said, laughing. “But one thing that makes me want to do it again is I know how much went wrong with fueling and pacing. Given my second half was so terrible and I still got second place, I can see a lot of potential there, so it makes me want to come back.”