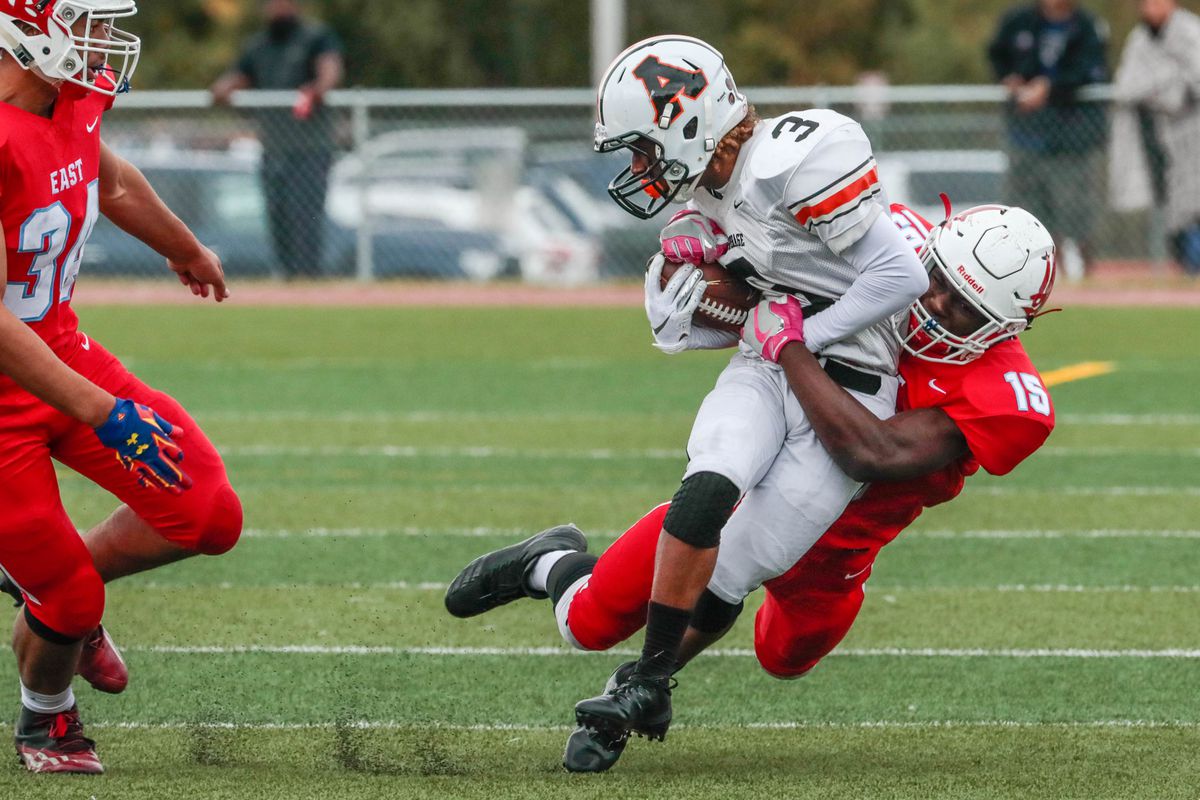 Soon after, the impressive offensive line, running game and defense took over.

It was then that time and the Thunderbirds flew by with ease.

East rushed for 228 yards, scored 36 unanswered points and ran its winning streak against Alaska opponents to 12 games with an accelerated 36-14 Cook Inlet Conference victory over the Eagles. Dating back to 1961, it was the 74th meeting between Anchorage’s first two high schools. East leads the series 42-32.

The Thunderbirds, currently ranked first among the state’s coaches and third in media polling, improved to 2-1 overall and 2-0 in league play. The game was a rematch of last season’s Division I First National Bowl finale.

East won that Oct. 19 title game over West, 35-6, latching on to its second state crown in three seasons. Also, similar to last season, the Thunderbirds recovered nicely after getting thumped in Week 2 by Cesar Chavez High of Phoenix, Arizona. They took a 53-0 beating last weekend down in the desert.

“The loss in Arizona helped us wake up and reminded us of the business at hand,” said senior defensive back Jordan Holland, who picked off three passes Saturday and returned one interception for a 53-yard touchdown in the fourth quarter. “There is no more goofing around. It’s time to dominate and show that East will destroy you.”

West built its early lead by taking advantage of an East miscue on special teams and converting on a big fourth-down reception by Dhar Montalbo. Niko Fa’amasino and Malyk Davis scored touchdowns and the Eagles led 14-0 at the 5 minute, 46 second-mark of the opening quarter.

“Our heads just weren’t in the game yet,” Holland said.

Mederios finished with 160 rushing yards on 20 carries and Mageo chipped in with 90 yards on 20 totes. East used bruising ball control to amass 170 of its team rushing yards in the opening half. Running back Oakland Ala, receiver Caelin Williams and quarterback Gavin Oakley scored first-half touchdowns.

Oakley also ran for a 5-yard score in the third quarter.

“Our offensive line knows,” East coach Jeff Trotter said. “They know it’s a ‘we go, the team goes’ thing. At times, it’s a bit baffling because of a few mistakes made. But we know our line is good.

“We want to play keep away and control the clock against spread (offense) teams like West or Service. When we limit touches, we limit opportunities for them to make big plays.”

The season continues to be a roller coaster for West, currently ranked fourth in the Alaska Football Coaches Association poll. The Eagles fell to 1-2 with Saturday’s loss and a season-opening setback against Division II powerhouse Soldotna. They downed Lathrop last week in Fairbanks.

“We learned we can be beat,” said Davis, a senior making his season debut who finished with seven catches for 62 yards and the early touchdown. “We may not be quite the team we want to be, but we’ll get there.”

History is on West’s side. The Eagles have played in six straight state championship games.

Defensively, East held West to 181 total offensive yards and only 49 in the final two quarters. Meanwhile, the offense kept running and running.

“I see our offensive linemen play their hearts out,” Holland said. “I make sure to high-five them after every play, they keep us safe. It’s a great benefit.