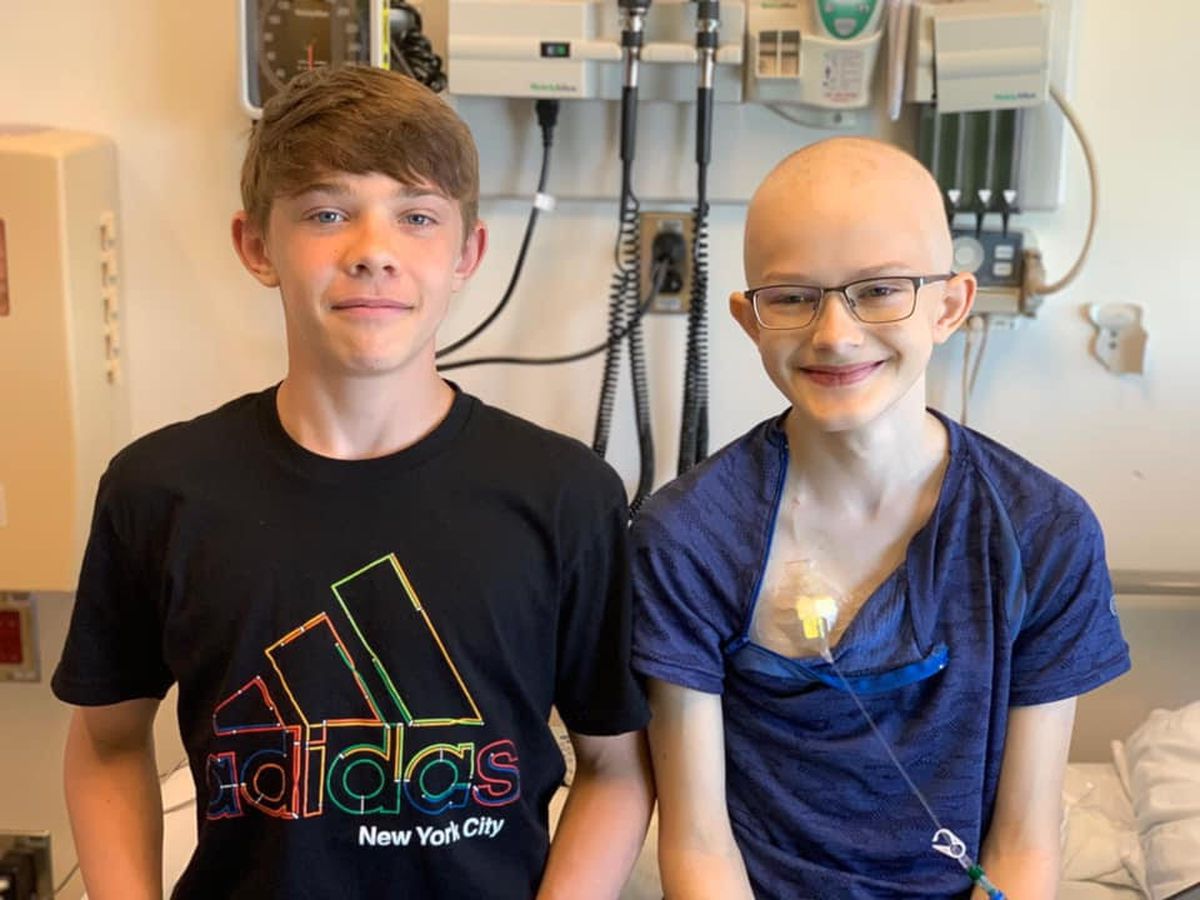 Jack Nelson, left, poses for a photo while visiting his younger brother, Nic, at Johns Hopkins Hospital in Baltimore, where Nic is undergoing treatment for cancer. (Jane Nelson photo)

Jack Nelson, left, poses for a photo while visiting his younger brother, Nic, at Johns Hopkins Hospital in Baltimore, where Nic is undergoing treatment for cancer. (Jane Nelson photo)

Nic Nelson can’t do much running right now, so a couple hundred of his closest friends are going to run for him.

Nelson is an Anchorage 13-year-old currently undergoing treatment for a rare form of cancer at Johns Hopkins Hospital in Baltimore. Before he was diagnosed with Ewing’s Sarcoma this spring, Nelson’s main concern was training for triathlons.

“That’s actually how this all started...” recalled his mom, Jane.

Nic had been complaining of hip pain, so he began seeing a physical therapist. But after competing in the Salmon Run 10-kilometer race in May, the pain continued to get worse, so the therapist recommended seeing a doctor.

At 11 a.m. on the final Monday of his sixth grade school year, Nic went to see a doctor. The doctor ordered an MRI, and at 1 p.m. Jane’s phone rang. The mother of two boys knew bad news travels fast.

“As soon as I saw that number I knew something was wrong,” she said.

Nic had a tennis ball-sized tumor in his pelvis that couldn’t be operated on. Doctors said he had to fly Outside for treatment. By that weekend, the family was in Maryland, where Nic spent his summer vacation fighting for his life.

It hasn’t been easy. Jane said her son has been forced to endure alternating rounds of chemotherapy and radiation treatment.

“We’re the first ones in and the last to leave,” she said.

The treatment is grueling, and even on “off” weeks Nic has a couple appointments a week for check-ups. To keep his spirits up, Nic passes the time visiting his cousins (Jane is originally from the Baltimore area), going to escape rooms or taking in football games. But the biggest boost came recently when he got a visit from his buddy, Reece.

“That was a huge morale booster,” she said. “He started eating a lot more and he started asking, ‘When can I go home?’”

Knowing people back home are pulling for him means a lot to her son, Jane said, so she was thrilled when she was approached by Dana Johnson, coordinator of the annual Maddy’s Run in Eagle River. Johnson said she heard about Nic’s story through mutual friends in the youth sports community and immediately thought the event -- an annual fundraising 5K run for children with cancer -- would be an ideal way to help the Nelson family.

Maddy’s Run started in 2015 to benefit Homestead Elementary student Maddy “Strong” Brandl. Brandl lived long enough to run in the inaugural event before succumbing to her disease at age 11. But the event has lived on in her memory, and last year it raised more than $13,000 for the families of two children battling childhood cancer.

There will also be a “Fill the Keg” event at Odd Man Rush Brewing in Eagle River starting at 1 p.m. Saturday.

Nic has picked up on the “Strong” nickname, with friends and family now proudly displaying #NicStrong bracelets and T-shirts wherever they go. There’s even a Facebook page. His mom said the support her son has received from the Anchorage area community has been overwhelming.

“It just shows how much love and how much good there is in the world,” she said.

Johnson said it’s gratifying to see Maddy’s legacy live on in both the children the race supports and the runners who continue to show up each year to support the Eagle River girl’s memory.

“I was just saying how amazing it is to see those same names show up every year,” she said. “They have that tie to Maddy, and that’s what keeps a lot of people coming back year after year.”

Nelson said she’s thankful for the financial support the race will provide her family. Although they have medical insurance and family to help out, she said there are so many little things that aren’t covered -- everything from parking fees to plane flights between Alaska and Maryland for her husband and older son.

Ironically, it’s also the little things that make the biggest difference when it comes to her son’s recovery. Simply getting a card from back home or hearing people are pulling for him means to world to Nic, she said.

“I really feel so much love and support and I know he does too.”

To learn more about the race or to sign up for this year’s Maddy’s Run, visit maddysrunak.com.