In her marathon debut, Kikkan Randall crushes her goal 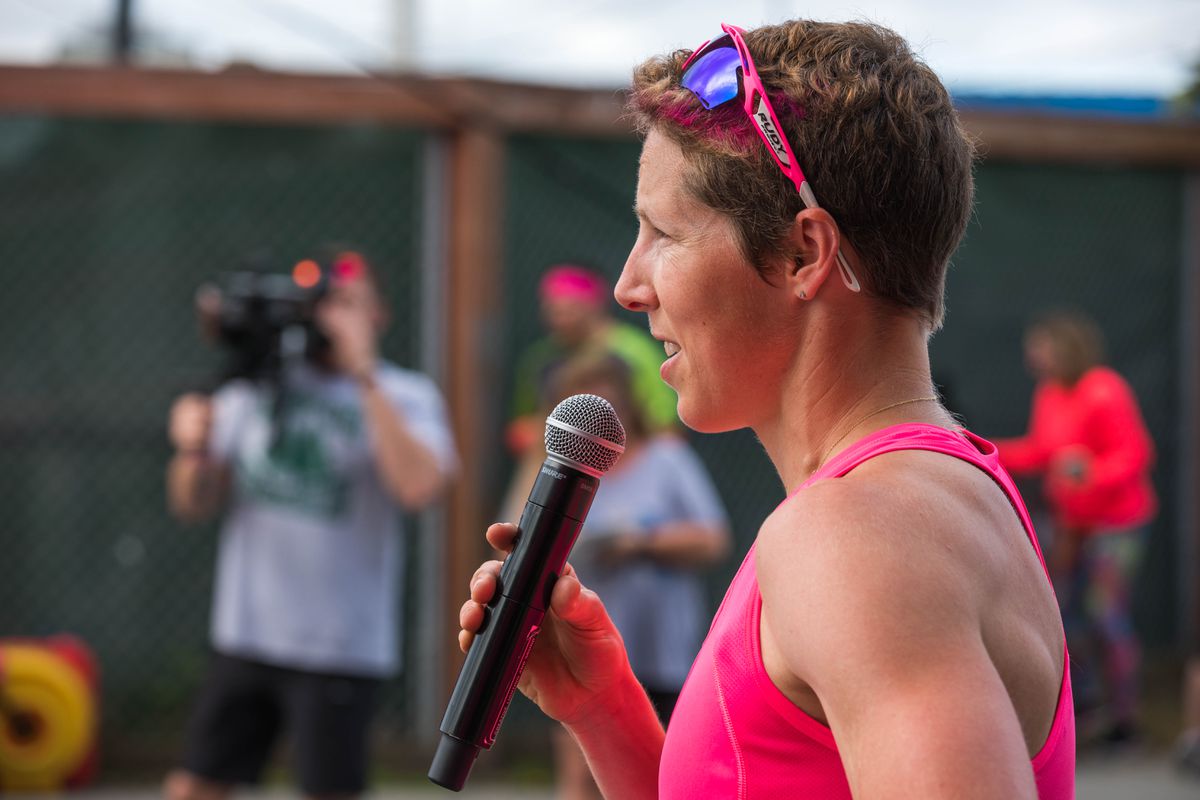 Kikkan Randall speaks to the crowd before the five-mile Alaska Run For Women in June, a little more than a year after her breast cancer diagnosis. In her marathon debut Sunday in New York City, she broke the 3-hour barrier. (Loren Holmes / ADN)

Kikkan Randall speaks to the crowd before the five-mile Alaska Run For Women in June, a little more than a year after her breast cancer diagnosis. In her marathon debut Sunday in New York City, she broke the 3-hour barrier. (Loren Holmes / ADN)

Kikkan Randall didn’t just reach her goal in her marathon debut Sunday. She crushed it.

Randall, the 2018 Olympic gold-medalist skier and breast cancer survivor from Anchorage, finished the New York City Marathon in 2 hours, 55 minutes, 12 seconds -- well below her goal of a sub-3-hour time.

Randall, who was undergoing chemotherapy treatment a year ago, had never before run 26.2 miles on pavement but she performed like a pro, running faster in the second half of the race than the first half and recording her fastest split-time in the second-to-last mile.

“I think I ran as fast as I would have last year if I hadn’t had cancer,” she said by phone. “It’s good to show you can come back.”

A reservoir of fitness built during a long world-class ski career helped Randall achieve her goal. So did the man who coached her at East High two decades ago, and so did running laps around cruise-ship decks while sailing the Inside Passage last summer.

Randall followed a training plan and race strategy formulated by Harry Johnson, who coached Randall when she was a teenager winning track and cross-country running championships. After deciding to enter the marathon, “he was the first person I called,” Randall said.

Johnson, who lives in Bozeman, Montana, followed Randall’s workouts online and coached her through the stress of a busy summer and fall, during which she traveled extensively for speaking engagements, cancer fundraisers and her work as an athlete representative for the International Olympic Committee.

“I’ve been on the road for 87 days since mid-June,” said Randall.

When she worried that she sometimes couldn’t follow Johnson’s daily workout plans, Johnson assured her that she could miss speed workouts as long as she didn’t skip any long runs.

That’s how Randall wound up running circles on the decks of cruise ships.

She spent part of the summer working for Princess Cruises as a guest speaker, a job that put her on five Inside Passage cruises. Nearly each trip coincided with days when her training plan called for long runs.

Boring? Not at all. “After going through cancer, anything’s good,” she said.

Putting in that kind of work made Sunday possible, said Randall, who was among 50,000 runners who covered ground in all five of New York City’s boroughs.

Runners from Kenya captured victories worth $100,000 -- Joyciline Jepkosgei won the women’s race in 2:22:28, seven seconds off the course record, and Geoffrey Kamworor topped the men in 2:08:13.

As one of the marathon’s “celebrity runners,” Randall did several pre-race interviews with members of the national media, recounting her stunning tale of winning a gold medal in February last year and finding two small lumps in her breast three months later.

Randall, who lives in British Columbia with her husband and their 3-year-old son, continued to work out as she went through chemotherapy, surgery and radiation. In February of this year, she skied to 12th place in the women’s 50-kilometer American Birkiebeiner, and in June she ran to third place in the Alaska Run for Women with a five-mile time of 29:29. Earlier this month, she ran a 1:23:40 half marathon, leading to her quest to break the three-hour mark Sunday.

“It was exciting for me to get back to a goal,” Randall said. “The cancer thing, it’s part of my story now, but I’m hoping it’s not a defining chapter.”