After his $100,000 payday, dazed Anchorage student deluged by calls and texts 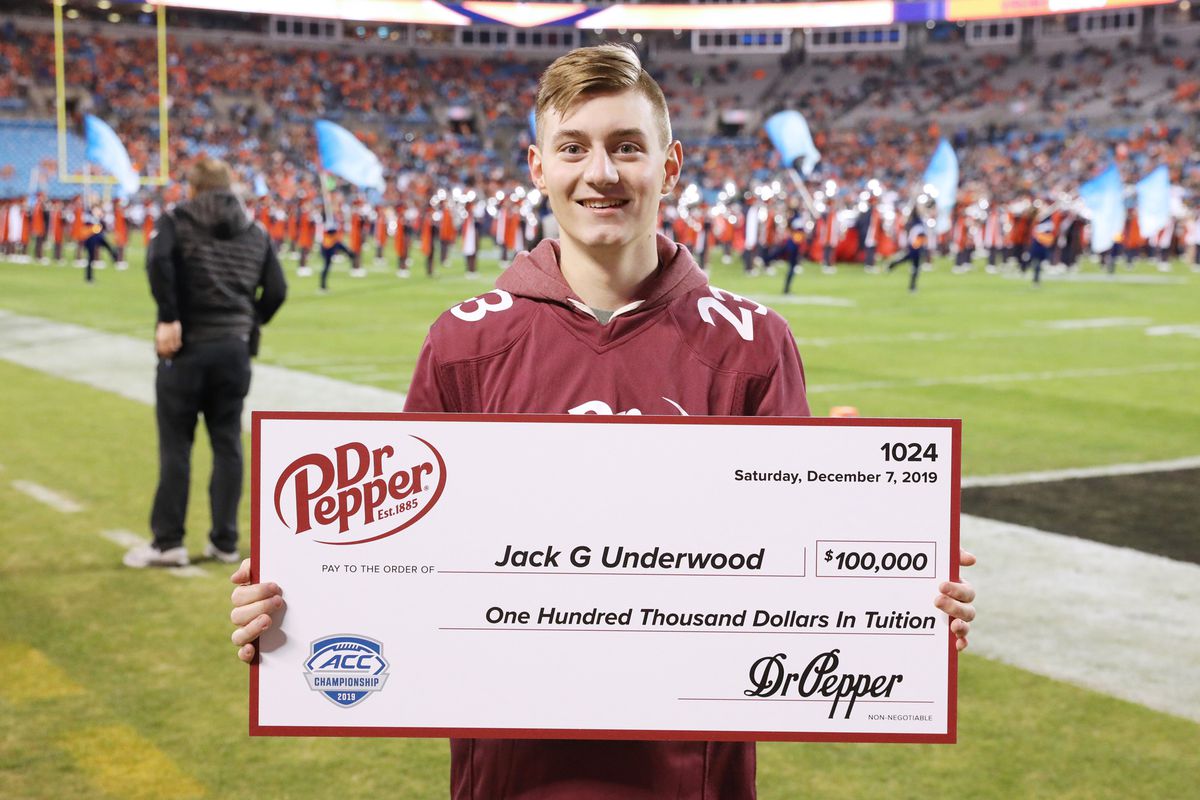 Anchorage's Jack Underwood won $100,000 during a halftime promotion at the ACC championship game between Clemson and Virginia. (Courtesy Dr Pepper)

Anchorage's Jack Underwood won $100,000 during a halftime promotion at the ACC championship game between Clemson and Virginia. (Courtesy Dr Pepper)

Before 19-year-old Jack Underwood of Anchorage started tossing footballs as part of a halftime promotion at Saturday’s ACC championship game, he handed his phone to a friend.

“I knew it would be exploding in my pocket while I was throwing because people would see me on TV, and I did not want that,” Underwood said Sunday. “I got it back as soon as it was over, and I had 120 text messages, another 100 messages on other apps and 20 phone calls.”

Everyone loves a winner. Especially when the winner pockets $100,000.

Underwood, a 2018 South High graduate, was one of five college students who won $100,000 Saturday in the 11th annual Dr Pepper Tuition Giveaway. In a televised promotion during halftime of the Clemson-Virginia game, he shovel-passed 10 footballs into a big Dr Pepper can five yards away to win his region. His opponent hit the target six times during the 30-second contest.

Underwood never looked at the score until the 30 seconds were up. “I saw I was in double digits and she was in single digits, and I was like, wow,” he said.

Wow is right. The prize money means Underwood, a sophomore at Liberty University in Lynchburg, Virginia, won’t have to balance school and a full-time job anymore. Underwood is majoring in music and worship leading at Liberty, where he also works 40 hours a week with the school’s custodial service.

He sure didn’t get much sleep Saturday night. He was up till 4 a.m. Sunday answering his texts and calls.

“It’s been incredible,” he said. “I still don’t even know what to feel, to be honest.”

The third of Bryan and Anita Underwood’s nine children, Underwood said he has two needs-based scholarships but is primarily working his way through college. He said that when he called his parents after the contest, “They were just crying. They were so happy that my financial burden had been lifted.”

Underwood said he won’t be taxed on the money. It will go directly to the school, which will distribute it on his behalf for tuition, room and board, books and other supplies. He’s hoping “supplies” includes musical instruments, because he’d like to expand his collection -- he already plays five instruments.

“My high school band teacher Mr. S (Justin Somaduroff) sent me a picture of me holding up a big check and said, ‘Dinner on you?’

“I had a couple people say they want to go to dinner with me. It’s gonna be a great Christmas break.”