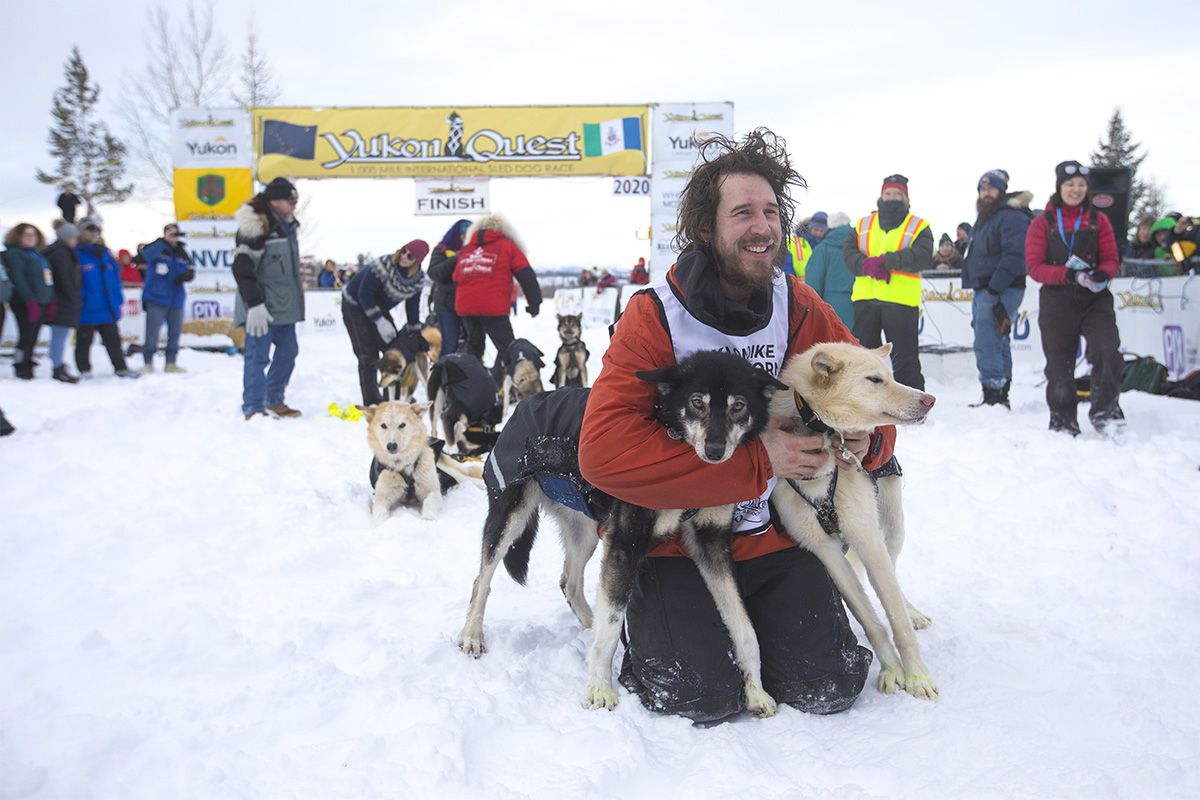 Brent Sass poses with his lead dogs after crossing the finish line in Whitehorse on Feb. 11 to win his third Yukon Quest. (Crystal Schick / Yukon News)

Brent Sass poses with his lead dogs after crossing the finish line in Whitehorse on Feb. 11 to win his third Yukon Quest. (Crystal Schick / Yukon News)

After breaking trail for much of the last two days, a sweaty but happy Brent Sass won the 1,000-mile Yukon Quest International Sled Dog Race on Tuesday afternoon in Whitehorse.

It was the third Quest victory and the second in a row for Sass, a 40-year-old from Eureka.

“This was a slog, there’s no doubt,” he said at the finish line. “… I’ve run 13 Yukon Quests and broke trail 10 times more (in this one) than in any of the other races put together.”

Sass crossed the finish line at 1:51 p.m. AST with 11 dogs in harness and his race bib in his sled. He hastily retrieved the bib and slipped it over his orange parka a few minutes after finishing. Second-place Michelle Phillips, a Yukon musher from Tagish Lake, finished four hours later at 5:51 p.m. AST.

Sass got down on the ground and rolled in the snow with one of his wheel dogs before standing up and working his way down the line, petting each dog. Then came steak chunks for the whole team, starting with leaders Morello and Woody.

“The dogs really proved they’ve got what it takes,” Sass said.

He said Woody had never been a leader before, but howling winds blew away the trail in many places and left Sass experimenting with different combinations of dogs in lead. Often he hopped off the sled to help lighten the load for the dogs.

He said he’d been “living in my sweat” for the last day or two. “I think I’m just going to throw all these clothes away,” he said.

[As Quest mushers reach Dawson, one team arrives at the halfway point without its driver]

As of 8 p.m. AST Tuesday, Sass and Phillips were the only finishers. Cody Straethe and Allen Moore left Braeburn at 2:34 p.m. and 5:46 p.m. on Tuesday, respectively.

Sass, who won his first Quest in 2015, turned what had been a close race Sunday and Monday into an uncontested one Tuesday during the final 100 miles from Braeburn to Whitehorse.

He left Braeburn with a 37-minute edge over Phillips and extended his lead significantly even though falling snow meant he and his team broke trail much of the way.

Sass and Phillips set the pace almost from the start of the 1,000-mile race, which began Feb. 1 in Fairbanks with 15 mushers. Four have dropped out of the race.

Sass was the leader into the halfway point in Dawson City, and the two played leapfrog during the 283-mile run from Dawson City to Carmacks.

Sass said he camped three times during that long run, and the rest paid off later. He said he ended his third rest about 10 minutes after Phillips passed him, waiting until he saw Phillips’ headlamp coming down the trail before he got his team ready to go.

“I started my cooker up, made one last wet snack, bootied my last four dogs and left 10 minutes after she passed,” he said.

“It was a risk to give her the edge. … But it was that rest that we banked that gave us the edge."

Phillips was the first to reach Carmacks, and she left the checkpoint Sunday night with a 66-minute lead over Sass.

Her lead vanished during the 66-mile run to Braeburn, where mushers must take a mandatory eight-hour layover. Sass reached Braeburn first and left there Monday at 10:37 p.m., with Phillips following at 11:14 p.m.

“When we left Braeburn I had a lot of confidence in my team,” Sass said. He said the 11 dogs that finished will be part of his Iditarod team next month.