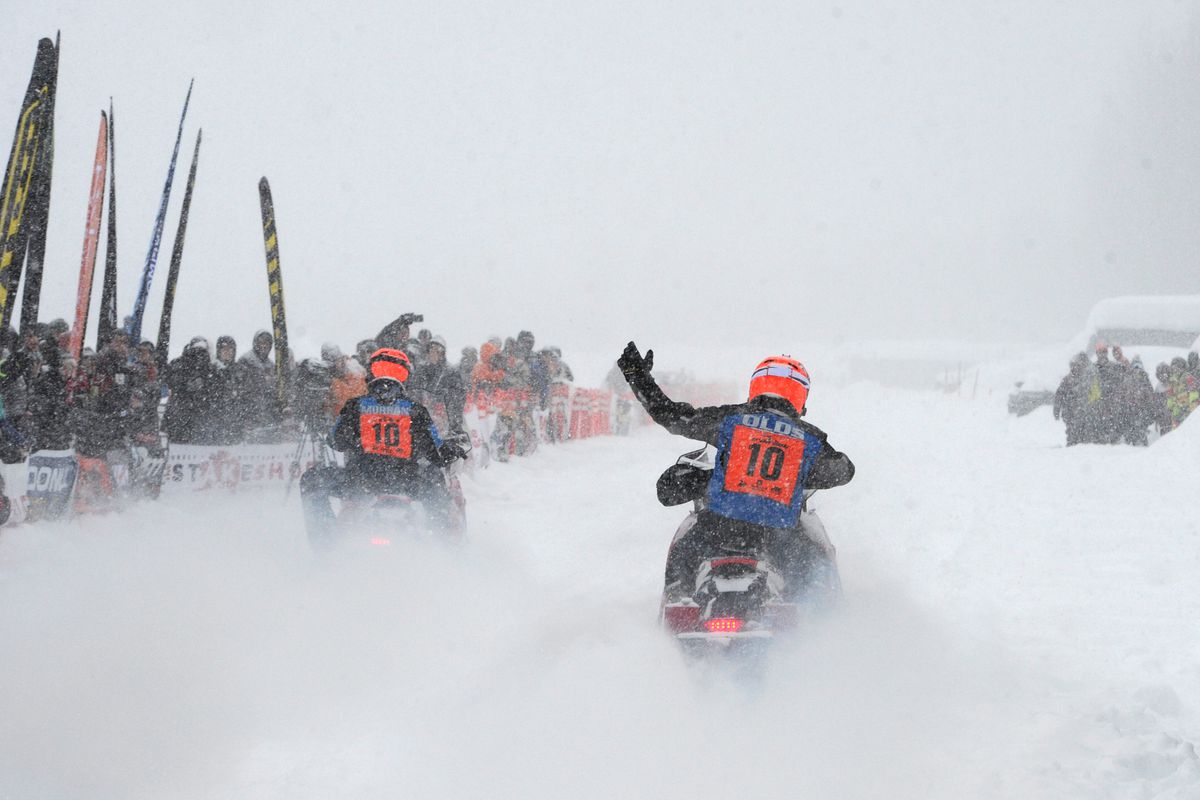 Mike Morgan and Chris Olds leave the start of last year's Iron Dog during a snowstorm at Deshka Landing. The pair will be gunning for a third straight title when the race begins Sunday in Fairbanks. (Bill Roth / ADN)

Mike Morgan and Chris Olds leave the start of last year's Iron Dog during a snowstorm at Deshka Landing. The pair will be gunning for a third straight title when the race begins Sunday in Fairbanks. (Bill Roth / ADN)

It’s a historic year for the Iron Dog, which has a new course, a new start line, a new finish line and a duo that could make a bid for the title “Team of the Century.”

Known as the longest and toughest snowmachine race in the world, this year’s edition will be nearly 400 miles longer than ever before, thanks to an extended race course that will take racers to Kotzebue and a handful of villages never visited by the race before.

The 2,400-mile race begins at 11 a.m. Sunday at Pike’s Waterfront Lodge in Fairbanks, where 29 teams will leave in four-minute intervals.

Among the field are two-time defending champions Chris Olds of Eagle River and Mike Morgan of Nome, who will be going for a rare third straight victory.

In the 36-year history of the Iron Dog, only two teams have pulled off a three-peat, none of them in this century.

Both of the race’s previous three-peaters enjoyed their dominance decades ago — John Faeo and Dan Zipay (1986-88) and Mark Carr and Scott Davis (1997-99).

Olds and Morgan will be back on Polaris snowmachines as they make their bid for another win. They won last year’s race by about 20 minutes and took the 2018 title by four minutes.

This is the ninth time they have teamed up for the race, which requires riders to compete as two-person teams for safety reasons.

Iron Doggers will follow the Yukon River to the Bering Sea coast and then make a loop to Kotzebue on the trail used for the annual Archie Ferguson-Willie Goodwin Memorial race.

Racers then head to the halfway point in Nome before heading south the Big Lake finish.

In order to ensure a daylight finish on Saturday, Feb. 22, there will be hold at Rainy Pass before racers make the final push to Flat Lake, where the clock will stop ticking. From there they will travel at non-race speeds to the finish chute at Southport Marina.

“The hold is designed to allow us a daylight finish, and to congregate the herd a little tighter near the finish to add some excitement to the end of the race for the spectators on Big Lake,” Iron Dog executive director John Woodbury said by email.

Woodbury said race organizers are trying to spread the word about the logistics of the finish to cabin owners, recreational riders and other trail users in the Big Lake area.

“We plan to come off the Su River and use the SVWT to Trail 6,” he said. “We will have a mandatory express checkpoint at the Fish Creek bridge that is under construction, then take Trail 6 to finish the official timing as we pop out onto Flat Lake. From that official timing stop to the race, the teams will cruise at a safe speed across Big Lake.”

He said there will be volunteers along Trail 6 “so we can monitor intersection and blind hills and corners to the best of our ability in an effort to ensure a safe day for everyone on the inbound trails.”