Pili, Hebard and a trio of Seawolves collect all-conference honors 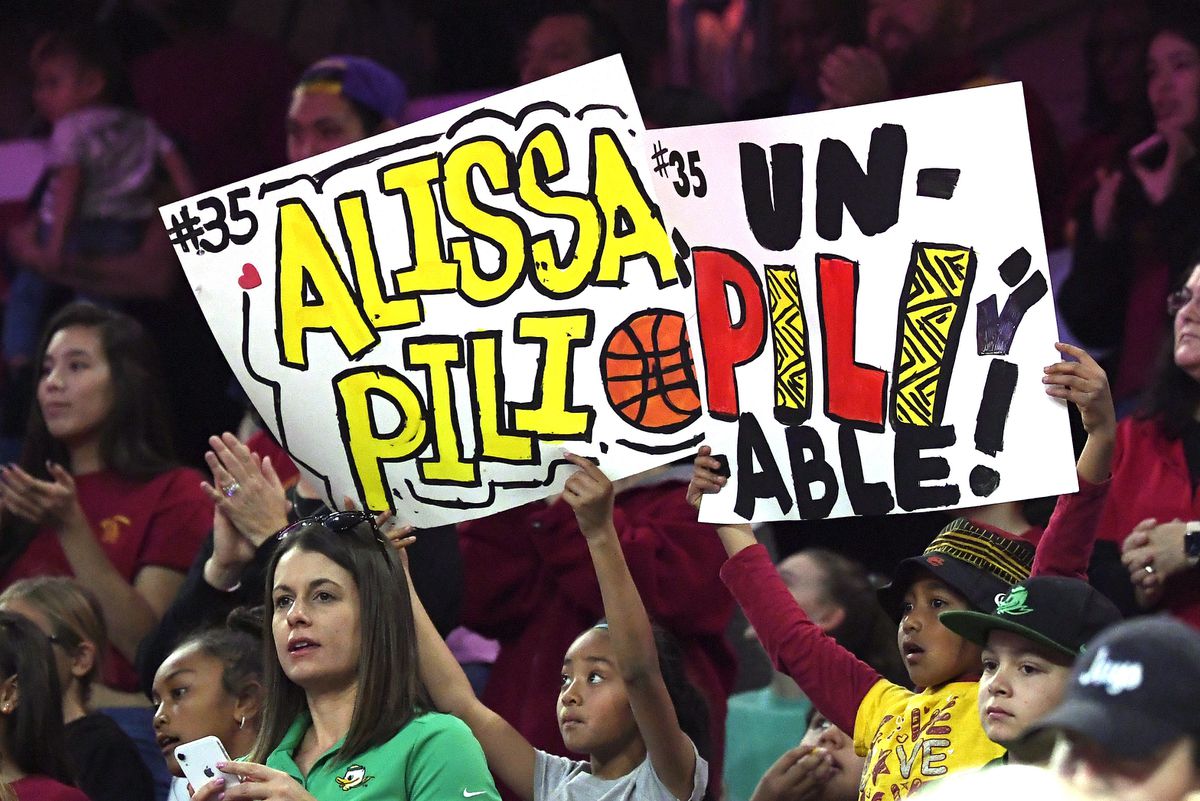 College basketball heads into the awards season this week, and so far Alaska women are cleaning up.

At the Division I level, Anchorage’s Alissa Pili of Southern Cal and Fairbanks’ Ruthy Hebard of Oregon were among 15 players named to the Pac-12 all-conference team announced Tuesday, and Pili was named the Pac-12 Freshman of the Year.

At the Division II level, UAA placed Yazmeen Goo and Safiyyah Yasin on the first team and Tennae Voliva on the list of honorable mention picks in the Great Northwest Athletic Conference, and coach Ryan McCarthy was named Coach of the Year for the fourth straight season.

Pili, Hebard and the Seawolves will all play in conference tournaments this week.

At the Pac-12 tournament in Las Vegas, Hebard and the third-ranked Ducks (28-2) received a first-round bye that sends them directly to Friday’s second round. Pili and the Trojans (16-13) will play Colorado in a first-round game Thursday.

At the GNAC tournament in Seattle, the fifth-ranked Seawolves (29-2) are the top seeds and will play a Friday semifinal game against the winner of a Thursday game between Simon Fraser and Central Washington.

Hebard, a West Valley High graduate, made the Pac-12’s all-conference team for the fourth straight year and is a candidate for the John Wooden Award as the best player in college basketball.

One of the best post players in program history, Hebard averaged 17.5 points and 9.7 rebounds this season and has more than 2,322 points and 1,272 rebounds for her career. Her career 64.9% shooting accuracy puts her on pace to set Oregon and Pac-12 records in that category.

Hebard has racked up 15 double-doubles this season and ranks second in the nation in shooting percentage (68.0). In a testament to her athleticism and versatility, she has 36 steals and 32 blocks this season, making her one of three Pac-12 players this season with more than 30 in each of those categories.

Pili, who led Dimond High to two state basketball championships, made a seamless jump from high school to college basketball. She’s been a starter since the first game of the season and is the only freshman to make the Pac-12 all-conference team.

Pili averages 16.2 points and 8.1 rebounds per game and was named the Pac-12 Freshman of the Week four times. She posted double-doubles in 11 games — a statistic that ranks her among the nation’s top 50 players — and tallied single-game highs of 32 points (against Washington State) and 17 rebounds (against UCLA).

Like Hebard, Pili is a defensive threat with versatile skills that produced 30 steals and 26 blocks.

Goo, of Daly City, California, is a four-year point guard who averaged 9.9 points, 3.9 assists, 2.6 rebounds and 1.9 steals per game. A 56.6% shooter, she’s on pace to break her own single-single school record for field goal accuracy by a point guard.

She enters the postseason with 101 career victories, which ranks her eighth on the school’s all-time list. She ranks third in career assists (444) and fourth in career steals (267).

Goo was an honorable mention pick as a sophomore and junior.

Yasin, of Oakland, California, is the top scorer on a team loaded with quality scorers. She’s averaging 14.1 point per game but can be far more explosive than that statistic indicates — Yasin has scored 20 or more points in five games and 25 in two games.

Yasin joined the Seawolves last season as a junior transfer and reached double figures in 11 games.

She has posted six double-doubles in 31 games and ranks among the GNAC’s best in rebounds (4th) and steals (4th).