In Alaska, postponement of Olympics means a change of scenery for a wrestler and relief for a swimmer 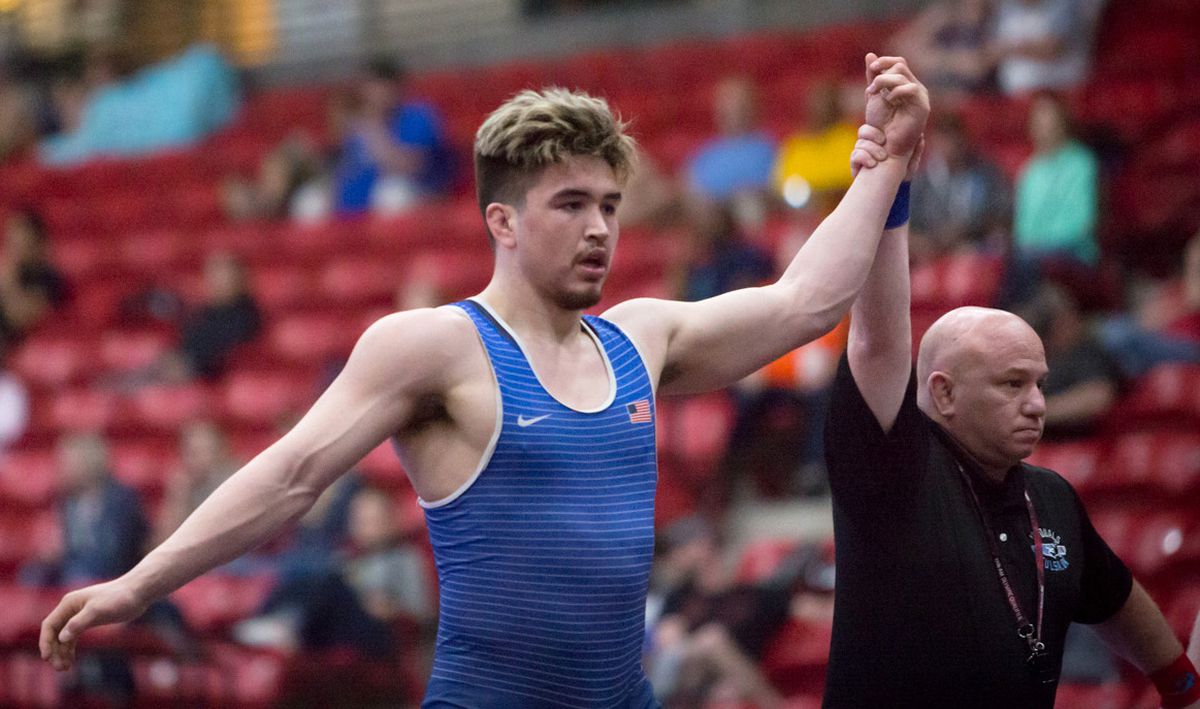 A ref raises Spencer Woods' hand, at the U.S. Open in April 2019 in Las Vegas. (Photo by Sandy Slater)

A ref raises Spencer Woods' hand, at the U.S. Open in April 2019 in Las Vegas. (Photo by Sandy Slater)

Back in November when he qualified for the April 3-4 U.S. Olympic wrestling trials, Spencer Woods never envisioned that come springtime he would be living by himself in a tent outside the northwest Alaska village of Shungnak instead of training for the biggest competition of his life.

That was before the coronavirus era.

On Tuesday the Summer Olympics were postponed, the final sports domino to fall because of a pandemic that has turned life upside-down for almost everyone, including elite-level athletes.

“I was expecting it,” Woods said. “It was the realistic and safest option.”

Woods, 21, was speaking by cellphone from Kotzebue while waiting for a flight to Shungnak, where he was born and where his family has a fish camp.

Two weeks earlier he learned the U.S. Olympic wrestling trials had been canceled and the athletic facilities at his school, Northern Michigan University, were shutting down. With his schedule in flux and his school closed, he returned to Alaska on Sunday.

Before he moves in with his mom and dad in Shungnak, Woods will self-quarantine for 14 days in an Arctic oven tent equipped with a wood stove. For company he will have his dog, an English Labrador named Kuugrak, which Woods said is Inupiaq for “big river.”

“I haven’t been home in April for five years now, and Alaska in April is a pretty cool time,” Woods said. “There’s a whole lot of light but still no mosquitoes. I’m excited.”

So far no Alaskans have earned spots on the 2020 U.S. Olympic team, but a handful were due to compete in upcoming Olympic trials.

Woods was preparing for the April 3-4 wrestling trials at Penn State, runner Allie Ostrander of Kenai was headed to the June 19-29 track and field trials at the University of Oregon and swimmers Lydia Jacoby of Seward and John Heaphy of Eagle River were training for the June 21-28 swimming and diving trials in Omaha, Nebraska. All of those meets have been postponed.

Jacoby, a 16-year-old Seward High sophomore, qualified for the swim trials 15 months ago at the U.S. Winter National Championships, where her 100-meter breaststroke time of 1 minute, 10.45 seconds met the qualifying standard of 1:10.99.

“Everything I’ve been doing this year has been leading up to those trials,” she said.

Jacoby hasn’t had a pool in Seward to train in since mid-March, when the Kenai Peninsula School District shut down classes and activities. A statewide mandate later shut down all of Alaska’s public schools and facilities until May 1.

“I feel like I’m in a good place now, because when they closed the pool I was really concerned about the Olympics and the trials — it’s not a fair environment, because not everybody’s pools are closed,” Jacoby said. “By next summer hopefully everything will get back to where everyone is training again.”

Jacoby is sad something she worked so hard for won’t happen this year, but she said it’s important to keep things in perspective during the pandemic.

“Everybody needs to take a step back and realize this is happening to everyone,” she said. “Everyone’s losing something.”

Eagle River’s Corey Cogdell-Unrein went through her Olympic mourning period earlier this month when she failed to make the U.S. team in trapshooting. A veteran of the last three Summer Olympics, Cogdell-Unrein won bronze medals in 2016 and 2008.

“For the health and safety of the athletes, this is the right thing to do,” Cogdell-Unrein said of the IOC’s decision to push the Summer Olympics to 2021.

She said the postponement will create stress for some athletes — one year can make a big difference in a sport like gymnastics, where youth is served, and people who have already made an Olympic team might worry that they will have to re-qualify next year.

For Cogdell-Unrein, the impact could be fewer chances to compete internationally next season, because USA Shooting’s travel teams are likely to be stocked by Olympic-bound shooters, she said. She has scaled back on her training since the the Olympic trials, which is giving her more time to spend with her husband and their son, Lane, who turns 1 next week.

Cogdell-Unrein said most of USA Shooting’s elite athletes can still train at private ranges where interaction with others is limited and social distancing is possible. Jacoby and Woods are in sports where training has been curtailed by facility closures.

Jacoby said USA Swimming sent athletes tips on dryland training, although she said “nothing is quite like being in a pool.”

She said she’s staying active by running and skiing and by pushing chairs out of the way in her family’s home so she can do squats and pushups every day.

Woods won’t be wrestling anyone on a mat anytime soon — there is no such thing as social distancing in his sport — but he hopes to make good use of his time away from organized practices.

“I’ll take my foot off the (gas) a little bit and use this time to decompress,” he said. “Friday before last all of our instructed practices were canceled and it was pretty shocking, coming from a sport where through rain, snow, sleet or the world’s on fire we still make it to practice.”

Woods was a star wrestler at Kotzebue High who competed in Division I college wrestling at the University of Maryland before falling in love with Greco-Roman wrestling. He transferred gave up NCAA wrestling to transfer to Northern Michigan, where there is a national training center for Greco-Roman.

With no competitions on his calendar for the next few months and possibly longer, Woods said he’ll use his time in Alaska to take online classes — he is due to graduate in December with a biology degree —watch his diet, rest and stay mentally sharp.

“It’s a bummer that all this is happening and I can’t do what I love, but realistically it’s just a sport. I’m glad I’m losing my sport and not all my friends and family that I love,” Woods said. “I don’t know how religious you are, but I can honor God in other ways than wrestling. Wrestling has always been my outlet for that, but there are other ways to express it.