At UAA and APU, a handful of athletes are hunkering down 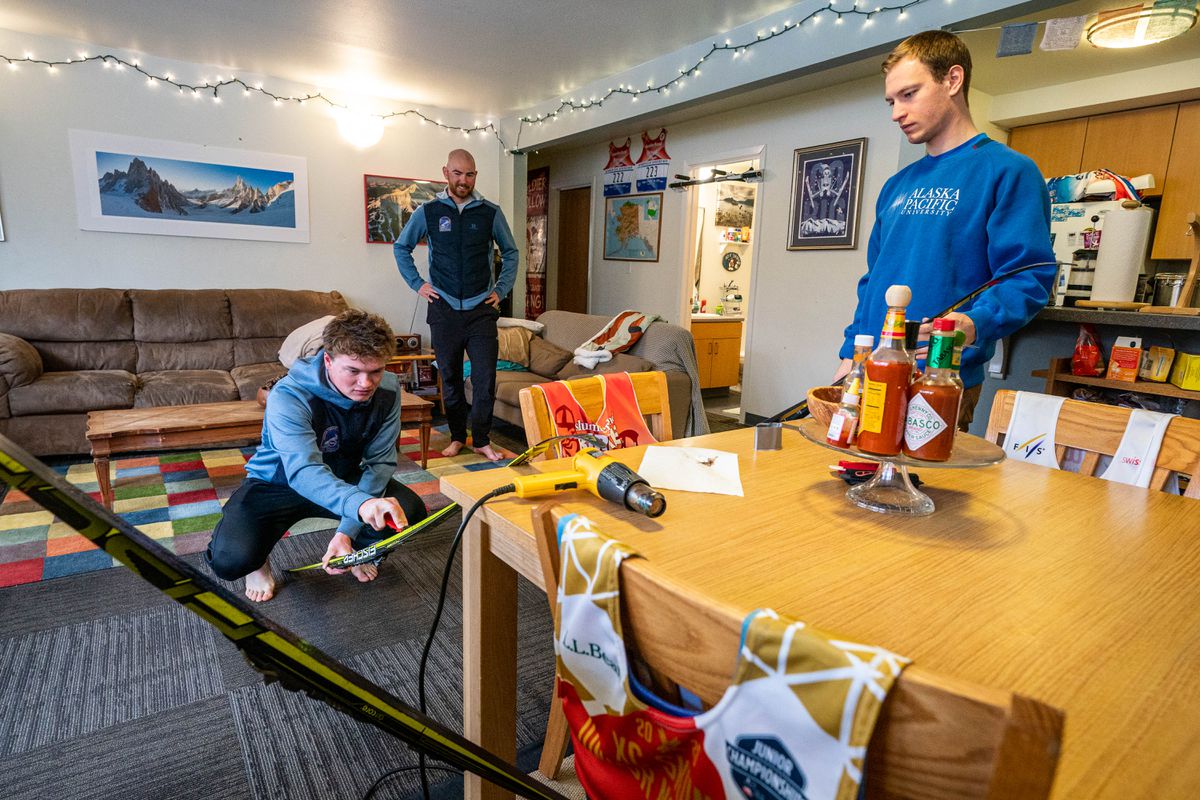 Vera Pluharova learned how to put on a T-shirt while doing a handstand. Forrest Mahlen does pull-ups in a living room that’s been turned into a mini-gym. Hunter Wonders has gone through all of Netflix, or at least it seems so to him.

All three are top-level athletes quarantining on Anchorage college campuses as the city and the rest of the world contend with the COVID-19 pandemic.

Pluharova, a middle blocker for UAA’s powerhouse volleyball team, is living by herself in a UAA dormitory. Mahlen and Wonders, members of Alaska Pacific University’s world-class cross-country ski program, are living with two other skiers in APU student housing.

Pluharova is from the Czech Republic, where protective masks are mandatory. She said she could have gone home when UAA shut down after spring break, but border and airport closures may have prevented her from returning in time for a summer camp.

“It was kind of complicated,” she said. “It’s much easier to stay.”

Mahlen and Wonders are both from Anchorage and could have chosen to quarantine with their families. Instead, they’re living in what’s called “the APU ski house” with Kai Meyer of Anchorage and Hailey Swirbul of Idaho.

A month ago they were in Quebec City, poised to make their debut on the World Cup circuit, when the season ended because of the pandemic. They traveled cross-country to get back home, and neither wanted to put their parents at risk once they got here.

“You never know what you encounter at an airport,” Wonders said.

“Both of my parents are of the 60-and-older age,” Mahlen said, “so it was nice to avoid them, especially after racing Outside all winter.”

Plus it was convenient to live at APU, where groomed ski trails are right outside their door. Until recently conditions have been quite good, giving the four housemates weeks of late-season skiing.

Mahlen and Wonders have lived in the two-story house for more than two years. The house has been in use by APU skiers for years — Rosie Brennan, a 2018 Olympian, lived there from 2011-17, an APU spokeswoman said, and siblings Erik Bjornsen and Sadie Maubet Bjornsen, who both skied at the 2014 and 2018 Olympics, have also lived there.

It has seven bedrooms, four bathrooms and two living rooms. With gyms and APU facilities closed, the skiers have converted the downstairs living room into a strength station equipped with free weights, a pull-up bar, medicine balls and a balance board. They use the coffee table as a bench table.

In many ways, though, life at the ski house is like life on the road during the ski season, where skiers live in groups to save on expenses and develop habits to keep themselves healthy despite constant travel and multiple roommates.

“We’re all hyper-clean anyway, because getting sick is devastating to your performance,” Mahlen said.

The biggest difference is not seeing other people — the four skiers decided quickly on a no-visitors policy as part of their effort to avoid the virus. But at least they have each other for company when they go for skis, hikes or runs, and that’s been a huge plus, Mahlen and Wonders said.

“There are times where I miss going on a little random outing to REI or AMH,” Wonders said. “But other than that it hasn’t been a strain on us.”

A mile or two away at UAA student housing, Pluharova has far less companionship. She said she doesn’t mind living alone, but she misses seeing her friends and teammates, and she really misses playing volleyball.

“I have Zoom meetings and I try to meet my friends at least every other day outside to go on walks or hikes,” she said. They keep their distance when that happens, she said.

She spends a lot of time reading for pleasure, checking in with her family on social media, playing the guitar and going on walks, runs and hikes. She’s staying away from TV.

“It’s real easy to sit down and watch, but I like to be outside and to be productive,” she said.

Pluharova’s recent productivity includes learning how to put on a T-shirt while standing on her hands with her feet propped against a wall.

First up is Vera! Maybe this challenge was a little too easy 🤷🏼‍♀️... 💛🤸🏽💚🏐 pic.twitter.com/ACgvtNoQlt

The handstand challenge was issued to UAA volleyball players by assistant coach Brooke Pottle, who posted videos of the efforts on Twitter.

Pluharova made it look almost easy. It wasn’t.

“That (video) wasn’t the first time I did it,” she said. “But I figured it out after a few times.”

All of the athletes hope to return to more serious physical pursuits soon, provided current restrictions are loosened in the coming months. APU skiers hope to go to Eagle Glacier for an on-snow training camp in June, and Pluharova hopes UAA’s summer training camp can go off as planned in July.