With ultramarathon in Utah canceled, Anchorage runner completes 100K back home instead 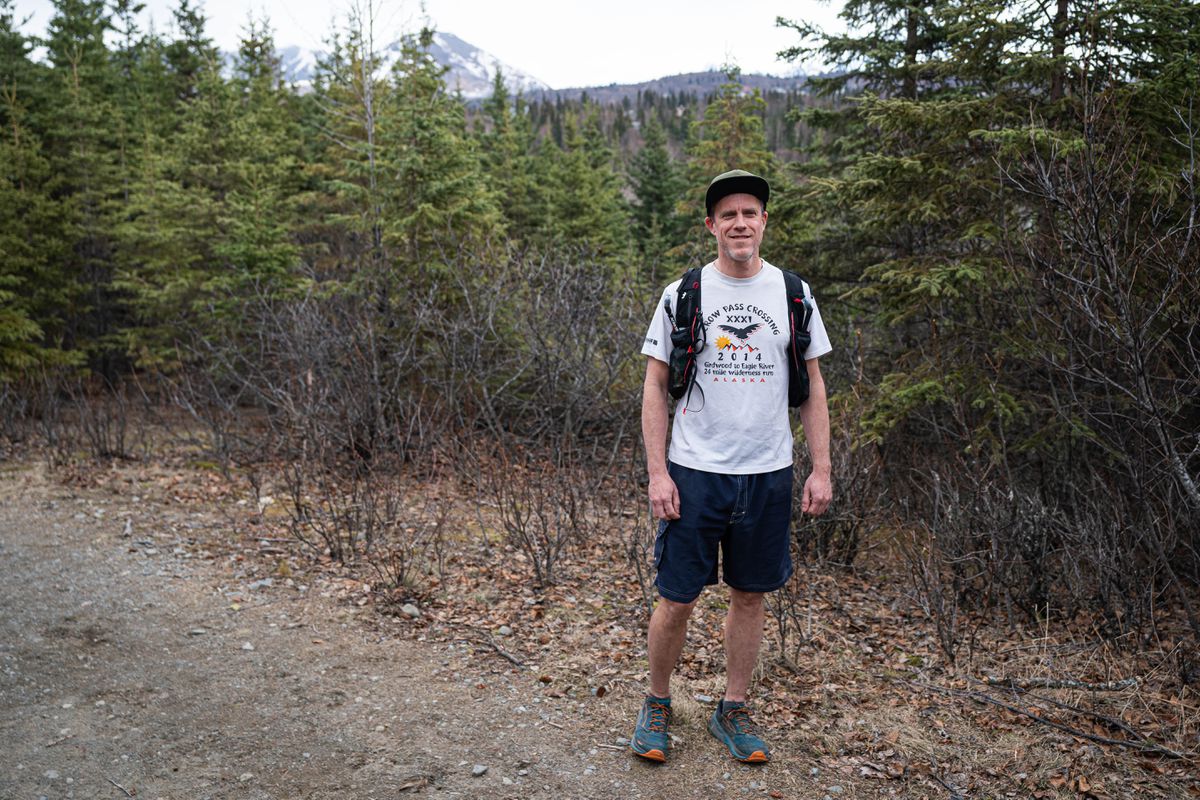 Rick Hansen stands on a Hillside trail on Friday, the day after he completed a 100-kilometer run through Anchorage. (Loren Holmes / ADN)

Rick Hansen stands on a Hillside trail on Friday, the day after he completed a 100-kilometer run through Anchorage. (Loren Holmes / ADN)

Some people will do anything for a T-shirt.

Rick Hansen’s plans to run a 100-kilometer ultramarathon in Utah last month was scrapped when the race was canceled because of the COVID-19 pandemic. Race organizers said they would send medals and T-shirts to runners anyway, prompting the Anchorage man to contact them to say thanks but no thanks — he couldn’t in good conscience accept a T-shirt from a race he didn’t finish. That’s an unwritten rule of ultrarunning, he said.

Organizers responded by saying runners who complete a 100-kilometer run anywhere during the month of April would be considered finishers.

On Monday of last week, with four days left in the month, he decided to earn his race swag.

“The trails were melting out, the weather looked good, and I could take a day off from work,” he said.

The challenge was to figure out a 100-kilometer course in Anchorage that didn’t involve running the same loop multiple times. Early in the week he and his wife, Kristen, checked out possibilities. On Thursday morning — the last day of April — Hansen took the day off from his job at GCI and headed to Service High, where he began his 62-mile run at 5:30 a.m.

He started with a 20-mile loop on Hillside trails that provided some elevation before bringing him back to Service. Then he headed crosstown on a 42-mile loop to Kincaid Park and back via the Chester Creek and Coastal trails.

“Alaska weather is very different from the Lower 48. A lot of those races, it’s over 100 degrees with lots of elevation,” he said, and many are at high altitude. “This was by far an easier race course.”

Hansen is the veteran of numerous 100-mile and 100-kilometer races, and he entered the Zion 100K because it’s a qualifying race for the Western States 100 in California, the granddaddy of 100-mile races and one so popular it has a lottery system to determine entries.

Hansen said he has tried unsuccessfully for five straight years to get into the Western States 100. In anticipation of hitting the jackpot, he enters two qualifying races every year — two, in case one gets canceled, or in case he has a bad day at the first one.

He approached his Thursday run as if it was a real race, stopping to refill his water supply at miles 20, 30, 40 and 50, and stopping at Westchester Lagoon to go use a porta-potty.

Hansen had company for about half of his 62 miles. Scott Jones, a friend who was celebrating his 51st birthday Thursday, turned down Hansen’s invitation to run 51 miles with him, but agreed to run the first 20. Hansen’s daughter Brianna met him at Kincaid and ran 3 miles with him.

Because it wasn’t a “real” race, there wasn’t the usual pressure to finish, Hansen said. But he fended off thoughts of texting his wife and asking her to pick up him before his 62 miles were complete — something he knew she wouldn’t do anyway.

And she did. Kristen Hansen went to Service High at 5:30 a.m. Thursday to run the first 10 miles with her husband and joined him hours later to run the final 12 miles. In between, she worked a full shift at Dowl Engineering.

Hansen was back at work at GCI on Friday with some aching muscles and a new goal. He’s the captain of GCI’s corporate team in the Healthy Futures 100 Miles in May Challenge, an annual fundraiser that involves pledge money raised by people who run or walk a total of 100 miles during the month of May.