For Gold Nugget Triathlon racers, it’s wait until next year 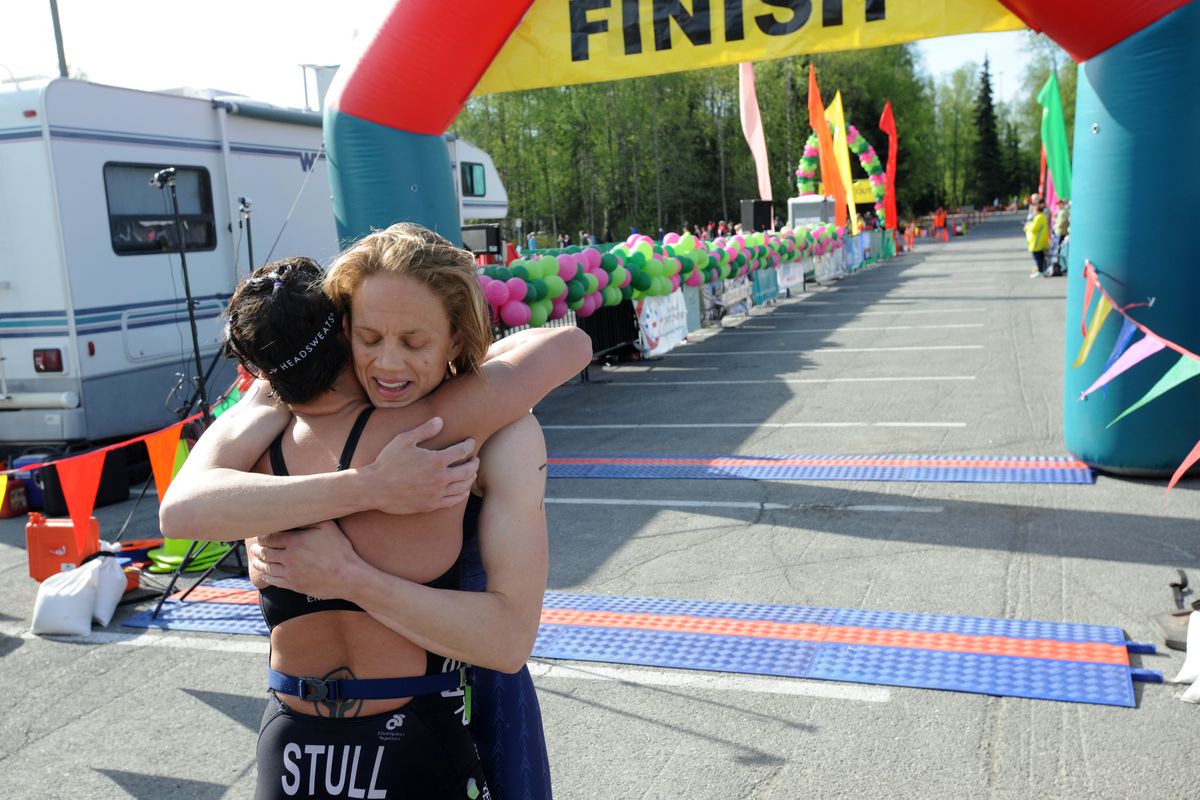 The Gold Nugget Triathlon won’t be held this summer, and the vibe that makes the popular women’s race so special is the reason why.

The race officially consists of swimming, biking and running, but it’s the unofficial fourth leg — hugging and cheering — that factored into the Gold Nugget board of directors’ decision to postpone the 37th annual race until next year rather than turn it into a virtual one.

Virtual races have become more and more prevalent during the COVID-19 pandemic — the annual Alaska Heart Run was a virtual event last month, and recently the Eagle River Triathlon and the Yukon River Quest paddle race decided to go the virtual route.

But the personal touch is one of the things that distinguishes the Gold Nugget, and organizers decided it wouldn’t be the same race without it.

“We talked about the whole virtual idea, but there’s so much rah-rah and camaraderie with the Gold Nugget that you’re kinda missing the whole point,” said board member and eight-time champion Shannon Donley.

Organizers are calling it a postponement instead of a cancellation, because 2020 entries will be deferred to 2021.

That’s an important distinction for girls and women registered for this year’s race, because gaining entry in the field of about 1,600 can be as challenging as the triathlon itself. Signups happen online, and typically the field is full a few minutes after registration opens.

The race is traditionally held in May, and early in the pandemic, organizers considered moving it to August or September.

But with so much uncertainty regarding limits on large gatherings and the prospect of a second wave of infections, the idea of a late-summer race was dismissed. Deadlines for making some purchases are approaching, and with no guarantee of a late-summer race organizers decided to postpone the race now.

“There’s no crystal ball that tells us whether we can have an event in August or September of 2020 with 2,000 people,” race co-director Missy Anderson said. "We looked at being a virtual event, and there are certainly a lot of them out there, but this particular group is so unique.

“One-third of our entries are first-time triathletes, and all of them really thrive on that atmosphere — the spirit and the hugging and cheering and accepting of each other and being supportive.”

This is first time the Gold Nugget has been called off since the inaugural event in 1984. There have been some close calls, including at least one year when an abundance of snow threatened the race and again in 2018, when the new highway interchange at Muldoon Road and the Glenn Highway required significant course changes.

Still up in the air is the Bike for Women, an all-female bike race that started as a prelude to the Gold Nugget Triathlon and turned into the biggest bike race of the summer with a field of 750. This summer would mark the 20th anniversary of the race.

“We still have not made a decision,” race director Joann Mitchell said Wednesday.

The race starts and ends at Chugiak High School, and because of the pandemic the Anchorage School District currently is not issuing permits to groups that want to use its facilities.

If the race can’t be held, Mitchell said it will defer entries to 2021.