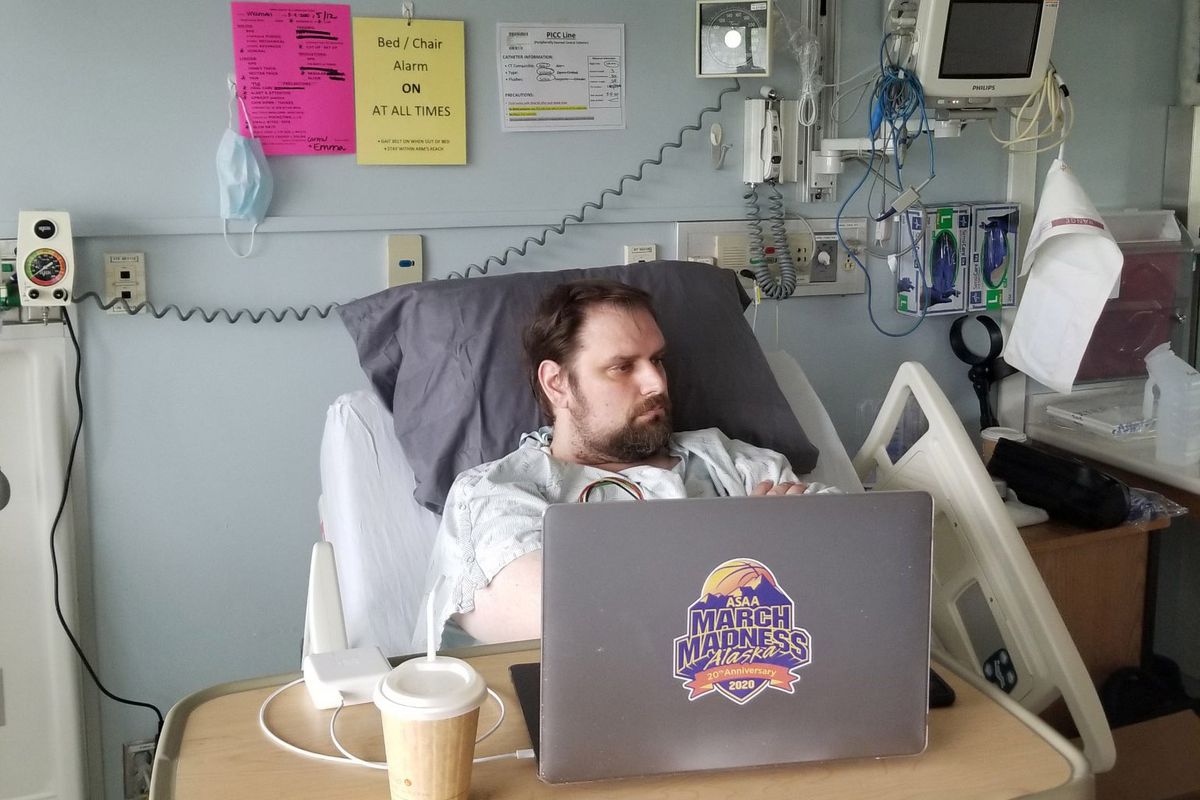 Isaiah Vreeman recovers in his hospital bed after a May 3 heart transplant. Vreeman, 40, is the associate director of the Alaska School Activities Association. (Photo by Jean Vreeman)

Isaiah Vreeman recovers in his hospital bed after a May 3 heart transplant. Vreeman, 40, is the associate director of the Alaska School Activities Association. (Photo by Jean Vreeman)

Thursday was a good day for 40-year-old Isaiah Vreeman of Anchorage. For the first time in five years, he took a shower without 13 pounds of wires, batteries and other equipment hanging from his waist in a one-pound plastic bag.

Those 13 pounds were Vreeman’s lifeline. For five years, Vreeman relied on an LVAD — a left ventricular assist device — to pump his failing heart until a more permanent solution was available.

That solution came May 3. Vreeman, the associate director of the Alaska School Activities Association who is a familiar presence at state high school championship events, got a new heart during a 13-hour transplant operation at the University of Washington Medical Center in Seattle.

Seven days after surgery, he was able to call Jean Vreeman and wish her a happy Mother’s Day. Eleven days later, he got a visit from his mom — his first contact with a loved one since he flew from Anchorage to Seattle on May 2.

That same day, he gloried in the experience of taking a shower without being encumbered by the external elements of the battery-run mechanical device that kept him going for so many years.

“I took my first shower without the LVAD in five years, four months and four days,” Vreeman said by cellphone. “It was wonderful.”

Though Vreeman’s journey is by no means over, the heart transplant was a critical, necessary step in his recovery from a barrage of life-threatening events that began in March 2014.

“I’m blessed,” Vreeman said Friday by cellphone. “Today has been a good day. I finally stood up and walked a few steps.

Since February 2015, Vreeman has been living with an LVAD, a life-saving device for people with end-stage heart failure. It can keep a heart pumping for up to 10 years until a heart transplant is possible. Every night for more than five years, Vreeman slept while tethered to a cord plugged into a wall socket as the LVAD’s battery recharged.

Because Vreeman’s troubles all started with a cancer diagnosis in 2014 — about a year before his heart problem surfaced — he wasn’t able to go on a transplant list until he was cancer-free for three years. Once on the list, he waited 15 months for a phone call telling him a heart was available.

Vreeman is a big guy — a sturdy 6-foot-5 — and doctors warned him it might take time to find a similarly sized donor.

“After about eight months I got a little discouraged,” he said. “Then with the COVID thing I got a little bummed, because I was getting tired of the LVAD.”

He thought the COVID-19 pandemic might put medical procedures like heart transplants on hold, so he was surprised when the UW Medical Center called on the afternoon of Friday, May 1.

Vreeman had just finished a conference call with MaxPrep Sports, a national website for high school sports. His next call was from the hospital, telling him a heart was waiting for him in Seattle. The next day he flew to Seattle with his parents, Steve and Jean, and his brothers, Amos and Gideon.

“The LVAD coordinator from UW picked me up and took me to the hospital,” he said. “I said bye (to family) there and didn’t see anyone again until yesterday.”

The new coronavirus meant Vreeman couldn’t have visitors until Thursday, when Jean Vreeman was allowed to visit in order to learn the many protocols that must be followed once Vreeman leaves the hospital. It was an emotional reunion, mother and son both said.

“I came so close to losing him and then ached for him for 5 years as I watched him try to live and work as normally as possible when you're attached to batteries or a wall socket,” Jean Vreeman said by text. “Then for the past 14 months I've lived with my phone waiting for him to get THE CALL only to have a flu virus prevent me and his dad and siblings from being in the hospital with him when he goes through 12 hours of open heart surgery again.

For Vreeman, the five days at the UW Medical Center without seeing family were difficult.

Surgeons made an especially long incision in Vreeman’s chest in order to deal with scar tissue left from open-heart surgery in February 2015, when the LVAD was installed. They removed the LVAD, which was resting under his old heart, and kept his old heart pumping until they put in the new heart.

“At some point they take out the old heart,” he said, not entirely sure of the exact order of procedures as he described them.

Vreeman said his new heart came from an adult man, but he doesn’t know anything else about it.

“It’s an incredibly sobering thing,” he said. “I feel unbelievably blessed, but I also feel very sad for the other family.”

During a 13-hour surgery to remove the tumor, doctors discovered the cancer had spread to Vreeman’s spine. They removed part of his pelvis and tailbone along with the tumor.

Six weeks of radiation and months of pain and immobility followed. About four months after surgery, he celebrated the triumph of moving his right ankle for the first time.

In late January 2015, things got worse. Vreeman went to the hospital one day with pneumonia, and by that night his heart and liver were failing.

Overnight he went into cardiac arrest. Surgeons in Anchorage put a pump in his heart before putting Vreeman on a plane to Seattle. He flat-lined during the medevac flight but was resuscitated. At the UW Medical Center, he underwent three hours of open-heart surgery so surgeons could install the LVAD.

Now the LVAD, with all of its annoying cables and bulk, is gone. In its place is a healthy, beating heart.

Vreeman will have to take an assortment of drugs every day for the rest of his life, including pain medication for severe nerve damage in his back, a leftover from the cancer.

The next year is already mapped out with doctor appointments, blood draws and other tests, he said, but he intends to start working remotely from his hospital bed as soon as he can. He hopes to be back in Anchorage by the end of July.

He said he’s eager to exercise again, something he said was “nearly impossible” the last five years because of the weight of the LVAD’s external batteries.

“This next year is a big year,” Vreeman said. “I’m very hopeful. Everything from the cancer to the heart failure and the LVAD, it all led to this transplant, and that’s kind of the end game. I feel like I’m in that end game now.”