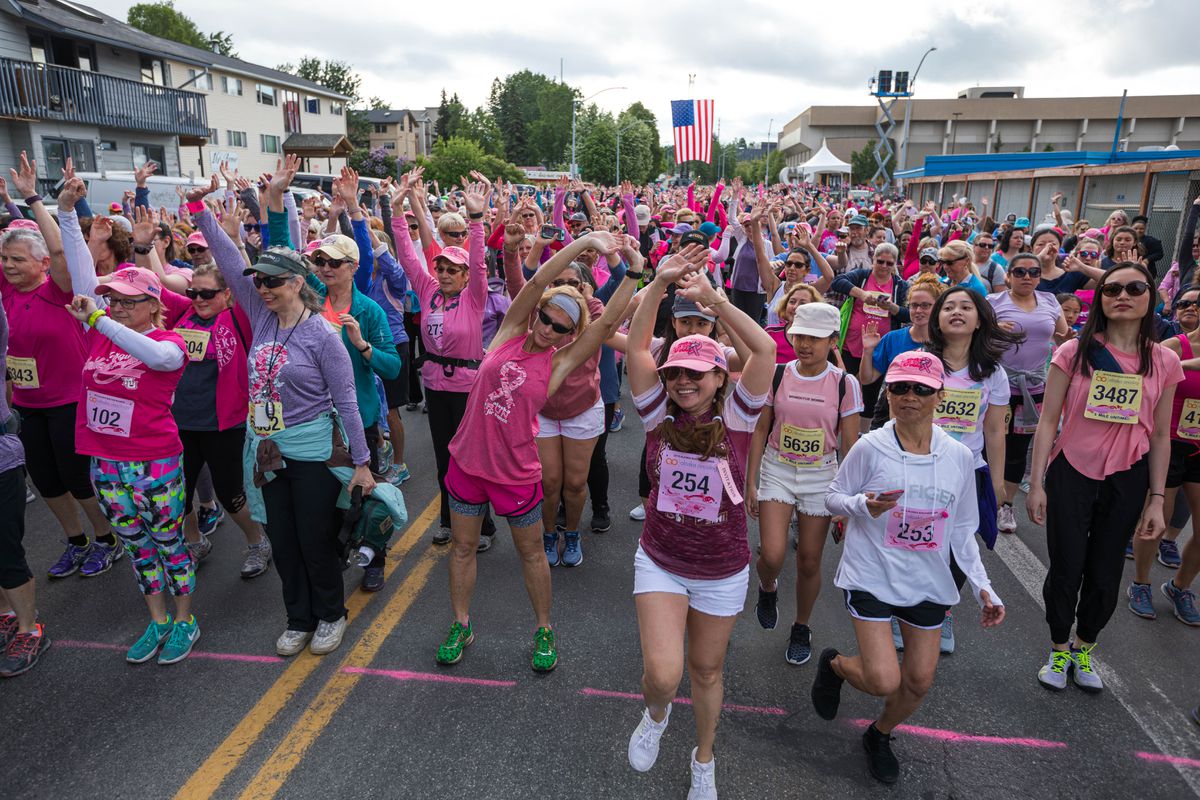 The 28th annual Alaska Run for Women will begin on the morning of June 20 with a five-minute warmup led by Olympic champion Kikkan Randall, a three-time winner of the race.

It will end eight days later.

The women-and-girls-only footrace, which raises money for causes related to breast cancer, is going virtual in a big way. Organizers are turning it into an eight-day event that gives participants flexibility for completing their 5-mile or 1-mile walk or run.

“The statistic is one out of eight women will be diagnosed in their lifetime, so we’ll do it over eight days,” said Kathy Wisthoff, a board member since the inaugural race in 1993.

By taking the race off the streets of Anchorage, organizers will be able to take the Run for Women everywhere. The June 20-27 virtual race is open to girls and women anywhere, “and the response from outside Alaska has been incredible,” Wisthoff said.

Registration opened Monday and by Thursday afternoon nearly 900 people had signed up, including 93 survivors of breast cancer, she said.

One of Alaska’s biggest and best-loved races, the Run for Women draws thousands of pink-clad participants each year, ranging from the fastest runners in the state to those who push baby strollers or wheelchairs.

It’s a race that delivers fast times, but it’s also a huge group-hug, a morning-long festival that includes yoga, Zumba, wildly decorated porta-potties and rows of vendors. Participants hear from friends and family Outside who say they wish they could participate, Wisthoff said, but until now race organizers have always said no.

“One of the holdups was our race insurance would only cover the physical event,” she said. “This year they are covering virtual events because they are happening all over the country.”

Participants will receive a link to an official bib they can print out, as well as the “In memory of...” signs that people pin to the backs of their shirts after writing the names of survivors or those who have died from the disease.

There will be opening ceremonies on Facebook on June 20 -- including a warmup led by Randall, a breast cancer survivor -- and closing ceremonies on June 27. Various games and challenges will be held on social media through the eight-day event, with prizes offered as incentives.

No time will be kept. Participants can do their races on treadmills, bike trails, track ovals, neighborhood streets -- anywhere they want. They’re being asked not to use the traditional race course, which organizers say is unsafe for pedestrian use without the typical road closures and police escorts.

Among those who signed up this week is defending champion Anna Dalton, who owns the second-fastest (27:35 in 2018) and fifth-fastest (27:46 last year) times in race history.

“When I realized the race would likely be canceled or virtual a month or so ago I was initially very committed to the idea of running a hard time trial on the course and trying to break the course record,” Dalton said by text.

“But since then I’ve realized that would be very hard to do with all the major road crossings, so I’m not sure what I’ll do now. For the last couple years (the Run for Women) has been a competitive highlight of the summer and I’m sad to not have that but I also know the race is about so much more than running fast.

"I haven’t come up with an alternative plan for where I’ll do the virtual race yet but have thought about different ways I can encourage my network to sign up and support an important community cause.”

Over the years the race has raised nearly $5 million for causes related to breast cancer. Last year’s race raised $236,000 that was used to provide grants to 11 groups in Alaska involved in diagnosing, treating and researching breast cancer.

Wisthoff said the 16-member board of directors considered canceling the race before deciding to go virtual, a decision motivated in part by keeping the race’s grant program going.

This year’s race has already raised $34,000, she said. Several top donors remained on board despite the financial impact of the COVID-19 pandemic, she said, and the average donation from participants is $40 -- up from $29 a year ago (the race asks participants to make a donation in lieu of an entry fee).

“I’m so happy,” Wisthoff said. "I’m so glad we decided to do it. We are going to have a nice grant fund.”