In her quest to raise suicide awareness, a Nome woman plans to run the 71-mile Teller Highway 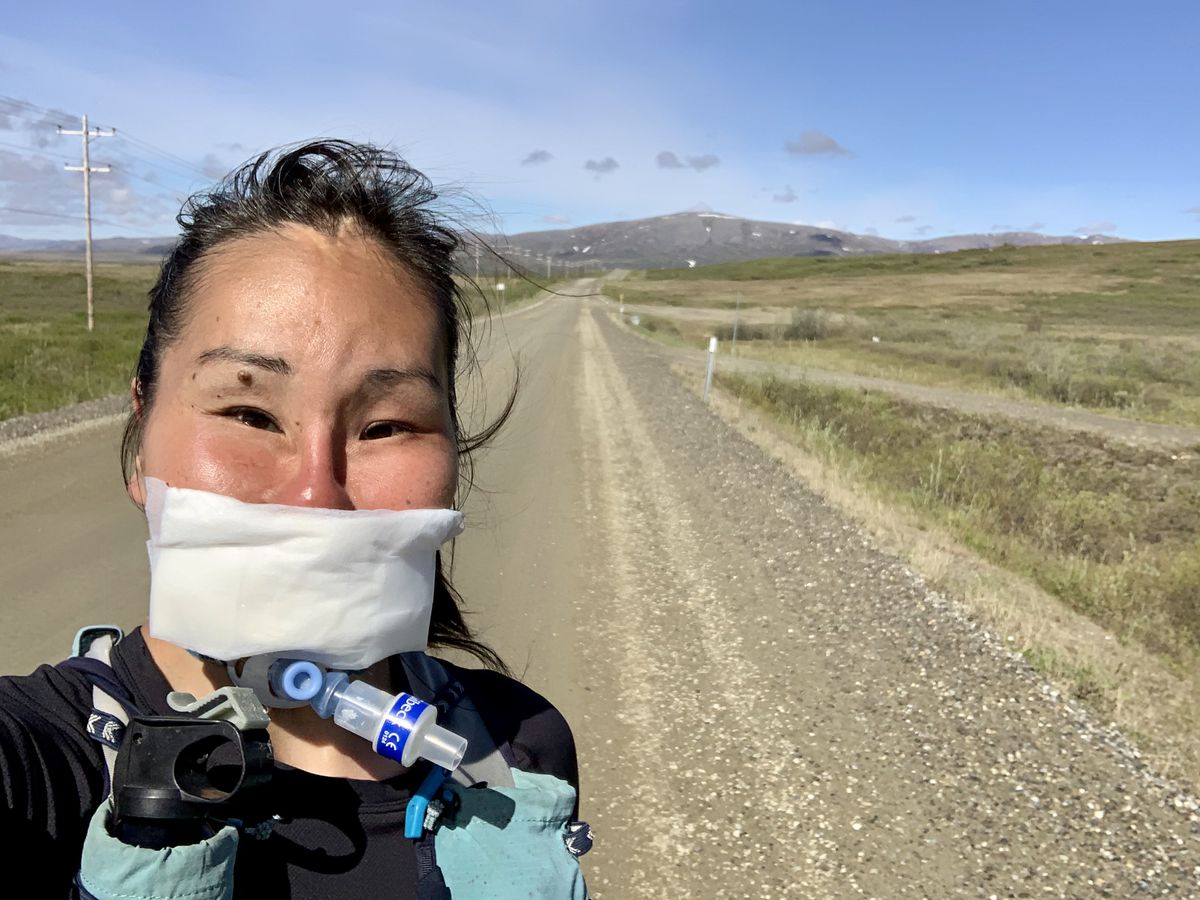 Carol Seppilu of Nome is planning a 71-mile run on the Teller Road to raise suicide awareness. (Photo by Carol Seppilu)

Carol Seppilu of Nome is planning a 71-mile run on the Teller Road to raise suicide awareness. (Photo by Carol Seppilu)

Usually when Carol Seppilu decides to run an ultramarathon, the journey to get to the starting line can make the actual race look like a sprint. She lives in Nome, and most of her races are a few plane trips away in the Lower 48.

On Saturday, Seppilu won’t have to go far to run far.

She’s planning to run 71 miles with a co-worker on the Teller Highway, starting in Teller and ending in Nome, most likely on Front Street in the heart of downtown. The co-worker is Tim Lemaire, a physician at Norton Sound Health Corp., where Seppilu is the cultural activity specialist for the Quyanna Care Center.

The Teller Highway is one of three roads that lead out of Nome, and Seppilu has never heard of anyone ever before running the 71 miles between the small subsistence village of Teller and the regional hub of Nome.

She’s calling it a prayer run and is dedicating it to “her people” -- Indigenous people in the Norton Sound region and beyond. Seppilu, 37, is a Yupik who was born in Savoonga.

“People are very intrigued by a Teller-to-Nome run,” she said in a recent phone interview. “I don’t think it’s ever been done before. People have walked it before.

“Just knowing that I’m doing something this big to show people how grateful I am to be alive, I think it (will be) a boost to their morale.”

Seppilu isn’t trying to raise money. She isn’t collecting pledges for every mile she runs or anything like that. Instead, she wants to raise suicide awareness, an issue she is passionate about as someone who has lost numerous friends and relatives to suicide and has survived her own suicide attempt.

When she was 16, Seppilu shot herself in the face with her dad’s hunting rifle. Multiple surgeries saved her but her injuries were serious, and today she breathes through a tracheotomy and wears a gauze face mask that covers the worst of the scars.

[Given a second chance at life, a Nome woman runs her way to health and happiness]

Seppilu said she and Lemaire have talked for a while about running the three roads out of Nome — the Teller Highway, the Nome-Council Highway and the Kougarok Road.

“We never really planned it, but we talked about it a lot,” she said.

This spring, not long after two young men in the region killed themselves, Seppilu was running up Nome’s Anvil Mountain when she was overwhelmed by grief.

“Usually I’m pretty happy and in the zone, but once in a while something will bother me and I’ll break down crying and I won’t be able to run anymore,” she said. “It just really devastated me, and my emotions caught up with me on that run.

“It felt like I felt everyone’s sadness, and that we needed a boost in morale and to get some inspiration going.”

Soon after that she decided to run the Teller Highway. By attempting to run 71 miles on a remote dirt road on the Seward Peninsula, she wants to send a message of hope and strength to Alaskans, who have one of the highest suicide rates in the nation.

“I want to let them know our people, our ancestors, went through some really difficult times but they never gave up,” Seppilu said. “They kept pressing forward.”

Seppilu became a runner six years ago — she weighed 233 pounds the day she ran her first mile in 2014 and has lost about 80 pounds since — and she quickly fell in love with ultrarunning.

Her ultimate goal is to complete a 100-mile run. Her longest completed race was the 2019 Black Canyon 100K in Arizona, a 62-mile run she finished in 16 hours and 20 minutes to beat her goal of 17 hours. She has entered Iowa’s 100-mile Hitchcock Experience three times but has never finished it — in her best effort, she made it 85 miles before dropping out.

Most of Seppilu’s races are in the mountains and include significant amounts of elevation gain. The Teller Highway, a dirt road except for the final few miles leading to Nome, has a lot of hills, especially around Teller. But with less than 5,000 feet of total gain, it’s not hilly by Seppilu’s standards.

Much of the road is in bear country and out of cellphone range, so Lamaire’s wife Jessica will drive the road to provide the runners with an aid station on wheels. She’ll have food and water and will be on the lookout for bears.

Seppilu figures the run will take 15 to 18 hours if all goes as planned. She knows it won’t be easy, but she also knows big efforts sometimes bring big rewards, and that’s what she’s aiming for.

“I hope to show the young people that things get tough but you have to keep going,” she said. “That’s what ultrarunning teaches you — keep putting one foot in front of the other.”

If you or someone you know is dealing with depression or a mental health crisis, there are many options available to help. Here are a few easily accessible ones:

• In Anchorage, the Alaska Native Medical Center’s emergency room is open 24/7 and can help any Alaska Native or American Indian dealing with a mental crisis or grief. The hospital is located at 4315 Diplomacy Drive. You can also reach them by phone at 907-563-2662.

• For more information on the Alaska Suicide Prevention Council and suicide in Alaska, visit dhss.alaska.gov/suicideprevention.

• For more information on the signs of suicide, visit afsp.org/preventing-suicide/suicide-warning-signs.