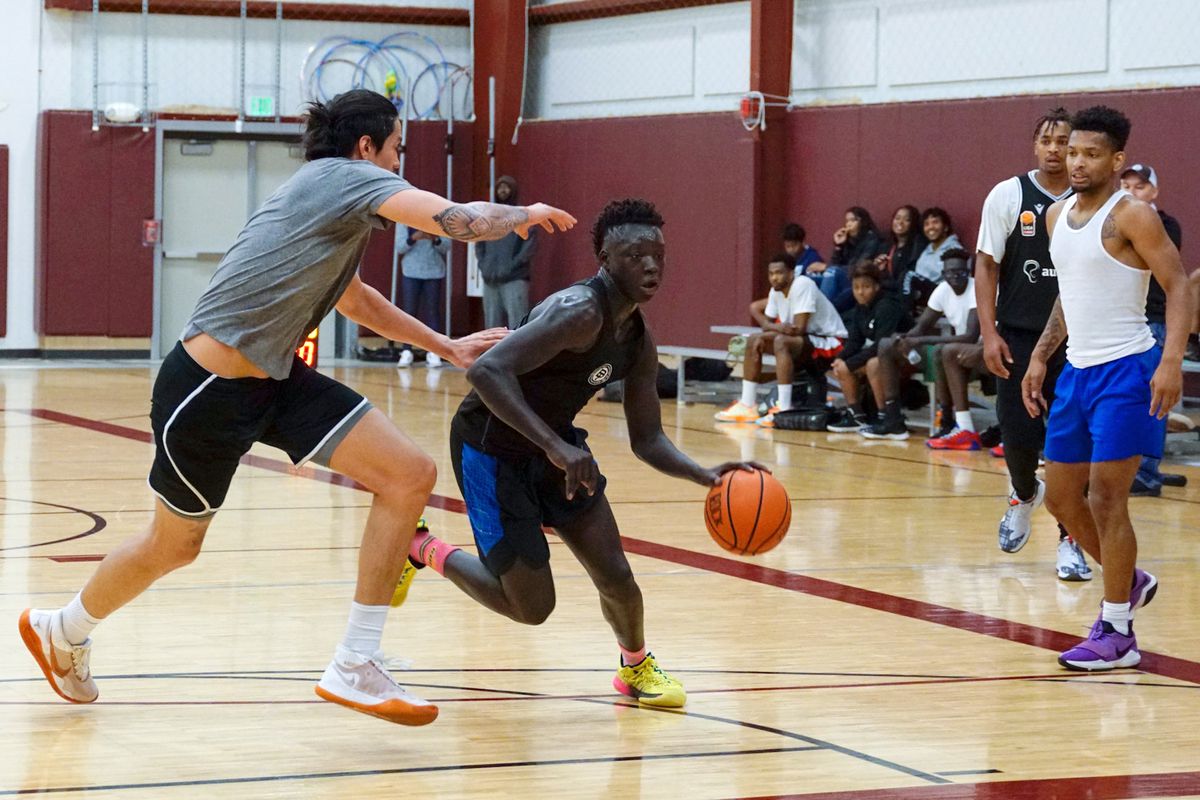 Mier Panoam dribbles by Kamaka Hepa during a pickup basketball game recently at the Arctic Rec Center. Panoam is a top high school player in Anchorage and Hepa plays for the University of Texas. (Photo by Ashley Ramoth)

Mier Panoam dribbles by Kamaka Hepa during a pickup basketball game recently at the Arctic Rec Center. Panoam is a top high school player in Anchorage and Hepa plays for the University of Texas. (Photo by Ashley Ramoth)

Eager to get the state’s best basketball players together in the same gym at the same time, Isa Wilson of Anchorage went to work.

He rented a gym, set up a schedule and reached out to players. He invited a mix of professionals, college stars and all-state high school kids.

The result was a slam dunk.

“All it took to get Alaska buzzing about basketball outside the season was to do a free run and invite the best players,” said Wilson, 24.

“But, really, it was about just being able to have a cool run, creating something where you’re feeling like you’re getting better every time you get on the court.”

Premier pickup games, or runs, are nothing new in Anchorage. They have been popping off for decades at places like the Fairview and Spenard rec centers and The Alaska Club.

Over the years, though, facilities reduced gym time for basketball in favor of other groups willing to pay more to rent the gym.

As a result, elite players had no consistent time to meet, and no summer league to compete in.

“It’s a welcome change in comparison,” said Anchorage’s Damon Sherman-Newsome, who scored more than 1,000 points as a Division I player at Colgate University. “It used to be, like, we’d know that day: ‘Hey man, we about to go to the gym.’ It wouldn’t be like every Monday, Wednesday, Friday.”

It is now. And players have packed the gym. The roster is a who’s-who of Alaska stars from the past, present and future.

“These are people the kids look up to,” Wilson said.

There are current pros in the house like Travante Williams, Jalil Abdul-Bassit and Devon Bookert (Williams and Abdul-Bassit play internationally and Bookert is in the G League). There are former pros like DaJonee Hale and Damon Sherman-Newsome, who both played in Europe.

“When you got pros, more people will come out,” Wilson said.

Rising stars Isaiah Moses, Mier Panoam, Colton Spencer, Benito Carter and Chasity Horn are there to make a name for themselves. And there’s even blasts from the past like Desmond Johnson, Laura Ingham, Levi Auble and Antonio Wyche.

The 5-on-5 action is competitive but not cutthroat. There is a shot clock. The first game is to 12 points, then it goes to 9 after that. Winners stay on the court.

This is an elite game, so players must be invited to lace ‘em up.

“No knock to anybody else, but we had to make it invite-only,” Wilson said. “It doesn’t make sense for everybody coming out and trying to play. They can’t be playing against just anybody.”

And, because of COVID-19 concerns, spectators are limited.

Wilson is working with a pair of his former West High teammates, Jhayde Zamora and Dondres McMorris. Both are basketball trainers with Zamora’s business, Get Better Daily, and they routinely post game highlights — tagged #GBDLateNightRuns -- on social media.

Wilson comes from a family with deep connections to Anchorage basketball. His uncle, Louis Wilson, started the SWEAT Camp in the 1990s and his grandma, Dolores Waldron, ran the Alaska Basketball Development Program for 20 years.

Zamora and McMorris help develop young players who are mixed in with the older players for some of the pickup games. Sherman-Newsome, 27, said he wishes he had been able to play against older, more experienced players during his high school days at Bartlett High.

“When I was in high school there wasn’t many opportunities for me to play with the best college guys,” he said. “I think the main thing for me that’s cool is they get to see what it looks like in person.”

Van Williams is a former Daily News reporter who writes about sports for the Alaska Sports Hall of Fame. This story originally appeared on his blog.

Van Williams is a freelance writer in Anchorage and editor of the Alaska Sports Hall of Fame blog.