A son’s game-winning hit completes a poignant, storybook season for the West Eagles and their coach 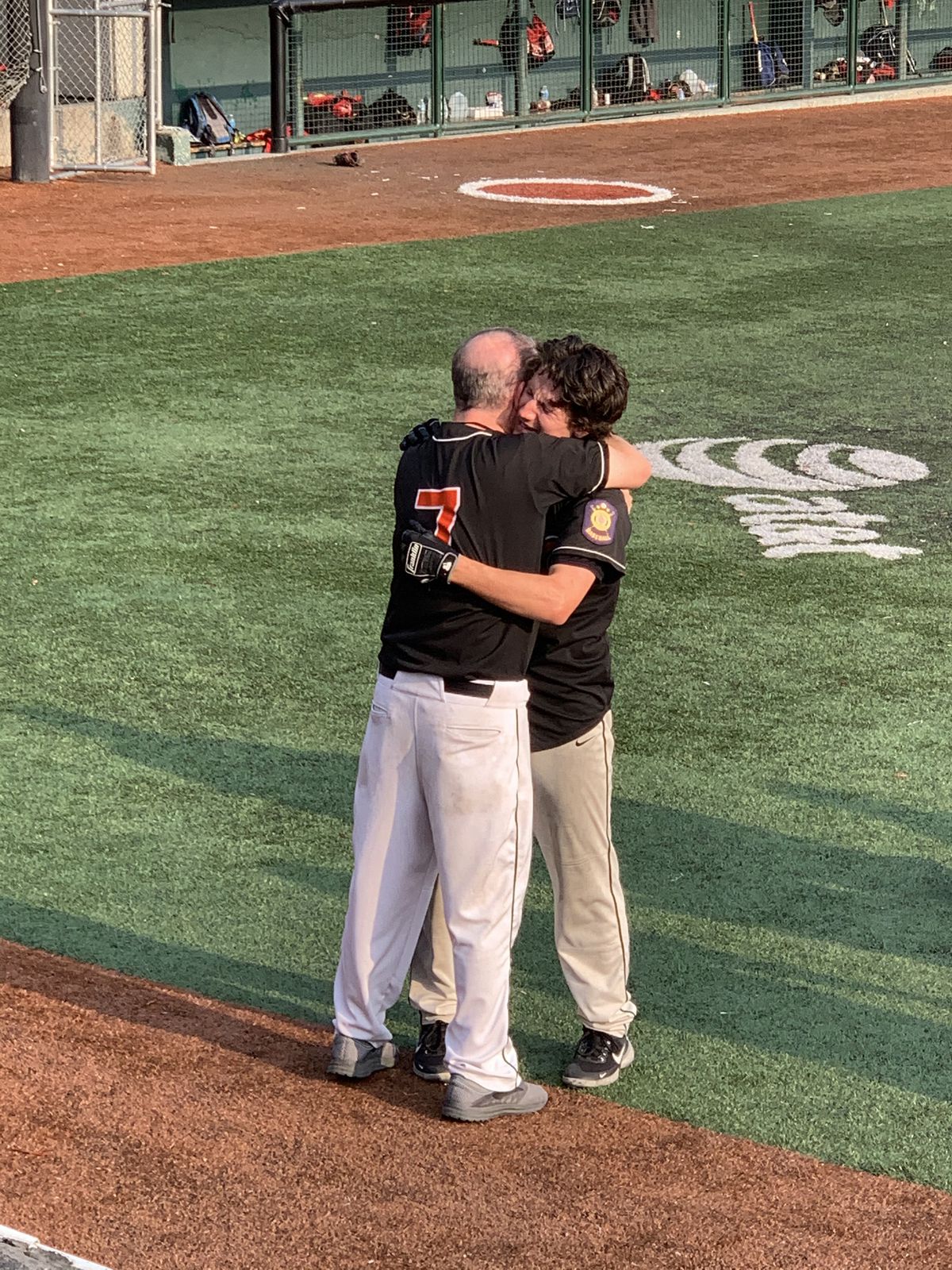 Jack Opinsky embraces his dad, John Opinsky, after his walkoff single lifted the West Eagles to their first state baseball title since 1977. (Photo by Cathy Opinsky)

Jack Opinsky embraces his dad, John Opinsky, after his walkoff single lifted the West Eagles to their first state baseball title since 1977. (Photo by Cathy Opinsky)

After he hit the walk-off single that lifted the West Eagles to their first state baseball championship since 1977, 19-year-old Jack Opinsky was at the center of the on-field celebration.

Revy Mack, his teammate and longtime friend, rushed out of the dugout for a midair hug. The rest of the team joined in, putting Opinsky at the bottom of a jubilant dog pile.

Still near the dugout was John Opinsky, Jack’s dad and the Eagles’ head coach. He took a knee after his son’s bases-loaded hit drove in the tying run and winning run to give West a 3-2 victory over Wasilla in front of a COVID-capacity crowd at Mulcahy Stadium last Wednesday.

As his team went nuts, he rose to his feet and stood alone on the edge of the infield. Jack extracted himself from the mob and ran to his dad and they shared a long, tearful embrace.

“He gave me one of the hardest hugs of his life. I never will forget it,” John Opinsky said the next day. “He was crying and he told me, ‘I love you so much.’‘'

It was a storybook ending for the Eagles, who trailed Wasilla 2-0 going into the final inning of the Alliance Baseball League championship.

For the Opinsky family, the ending was a gift.

Shortly before the 2019 baseball season, John Opinsky was diagnosed with glioblastoma -- the terminal brain cancer that both John McCain and Ted Kennedy died from. Most people with glioblastoma live six to 15 months, Opinsky said.

Two days before surgeons removed a brain tumor measuring 1- by 1.25-inches, Opinsky met with his team.

Revy Mack, West’s third baseman, was part of the huddle. He’s best friends with Jack and Nicko Opinsky -- Nicko also plays for West but spent most of the season on crutches after getting injured sliding into third base -- and has known the Opinsky family forever.

“I had heard about it before he told the team, but hearing it from his own voice really let it sink in,” Mack said. “I don’t think there was a dry eye after he gave the speech.”

This year was Opinsky’s fourth season with the Eagles and his third as the head coach, but he’s been coaching on and off since he was a 21-year-old coach for the City View Little League, the league he played in as a kid.

John and Cathy both graduated from West High, and both have strong roots in Alaska. John’s dad, Bob, was Anchorage’s postmaster for many years and his mom, Edie, was a longtime staff member for Sen. Ted Stevens. Cathy’s grandfather, Norman C. Brown, founded the Anchorage Daily News in 1946 and later started Northern Printing.

Jimmy is the tall one -- and the one who isn’t into team sports. Jack is crazy about baseball and will play at Riverland Community College in Minnesota in the 2020-21 school year. Nicko was one of West High’s iron-man hockey players who won the state championship last February with a 15-man roster. The Eagles beat South High 4-3 in double overtime, and Nicko played all eight minutes of the first overtime and was on the ice for most of the game.

John, a commercial property manager and real estate broker, loves hockey, but baseball is his passion. His dad grew up in Pennsylvania as a Red Sox fan and John inherited that addiction. The Opinskys live near downtown Anchorage in the house where John grew up -- “I played a lot of catch with my dad here,” John said -- and 11 years ago they built a batting cage in their back yard.

It’s a well-used cage with only one rule: No hitting after 9 p.m., a concession to neighbors.

The cage gets busy on game days, when most of the Eagles come over to take batting practice before heading to the ballpark. For John Opinsky, it’s one more place where he can teach baseball fundamentals, the thing he loves most about coaching.

Teaching is something he can still do as cancer saps his strength. He doesn’t hit grounders for infield practice any more -- “I would just embarrass myself,” he said -- but he seldom missed practices or games because of the disease.

Living life to its fullest

Opinsky was absent for one week of the season when the family traveled to Montana for a fly-fishing trip. He said he made the trip despite the threat of COVID-19 because he is determined to do the things he wants to do with whatever time he has left.

“We’ve all got a time clock. Unfortunately, mine is probably shorter than most,” he said. “I’m not going to stop living because I’ve got something that’s going to kill me.”

“I tried to pass on a few things like that,” he said.

He also tries to teach by example.

“I’m gonna die from brain cancer. It’s a hard reality,” he said. “I was told I might not make it out of surgery, and I was told I could have an immediate recurrence. I went six months. I shot a moose last fall. I’m showing my sons I’m not going anywhere, and I’m going to live my life to the fullest.

“... I can do my part and keep fighting. I don’t want to be someone who turtled and wasted away and didn’t live life.”

After a 13-11 regular season, the Eagles opened the state tournament with a 3-0 win over Juneau, the defending state champions. They lost their second game, 10-8 to Wasilla, but came back with a 7-4 win over top-seeded Dimond and a 15-12 win over previously undefeated Eagle River to earn a spot in the championship game.

Wasilla touched Wilson for two early runs and led 2-0 going into the bottom of the seventh and final inning, while Gilbert limited the Eagles to one hit and four baserunners through six innings, but he was nearing the league’s pitch-limit of 105 when he took the mound in the last inning.

Luke Langnes got West going with a leadoff double. Mack made the first out on an infield popup, Max Fink reached base on an error, and Bubba Mendoza became Gilbert’s 12th strikeout victim for the second out. But Gilbert reached his pitch limit during Mendoza’s at-bat and had to leave the game. His replacement hit West’s Eli Seaver with a pitch to load the bases.

That brought up the top of West’s order, and Carter Stolp made it 2-1 with an RBI single to left field.

And that brought up Jack Opinsky, who was 0 for 3 with two strikeouts. A shortstop best known for his defensive play -- he was the tournament’s Gold Glove award winner -- Opinsky came to the plate with Wasilla’s outfielders playing shallow.

Wasilla didn’t expect him to hit the ball far, and neither did he. He hoped to poke an infield single, drive in the tying run and keep West’s season alive.

Angels in the outfield

A COVID-19-capacity crowd of 499 was on hand for the game at Mulcahy Stadium, and many more fans watched from the parking lot. They stood in the beds of pickup trucks, sat on the hoods of cars and lined up at vantage points along the fence.

Cathy Opinsky watched from the box seats above West’s dugout on the first-base line, surrounded by friends and family, including her mom. When Jack came to the plate with the game on the line, she was a nervous wreck.

Not Jack though, and not his dad.

“I don’t know why, I just wasn’t nervous,” Jack said the next day while hanging out at home with his mom and dad. “I’ve been the last out for our team plenty of times.”

“When he got up to bat, I had a weird sense of calm,” John said.

“Really?” said an astonished Cathy. “I came home and watched it again (online) and I was still nervous.”

At the game, she silently implored her son to come through.

Jack took a first-pitch strike and then belted a line drive to left field. The ball glanced off the left fielder’s glove and went over his head while Fink and Seaver raced across the plate.

“It was a little bit of angels in the outfield,” John said.

Cathy started crying and accepted a Kleenex from Luke Langnes’ mom, who was sitting behind her. John took a knee. And Jack slowed down as he reached first base.

Then chaos. He and Revy Mack were jumped into each other’s arms and became part of a dog pile. He saw his mom and his uncle in the box seats and he saw his dad, standing alone at the base line.

The next day, John had a bruise on his chest -- his sunglasses, hanging from his neck, had been crushed into him by the force of Jack’s hug.

“I’ll take that bruise any day of the week,” he said.