In the Last Frontier men’s soccer division, Alaska’s best players get a league of their own 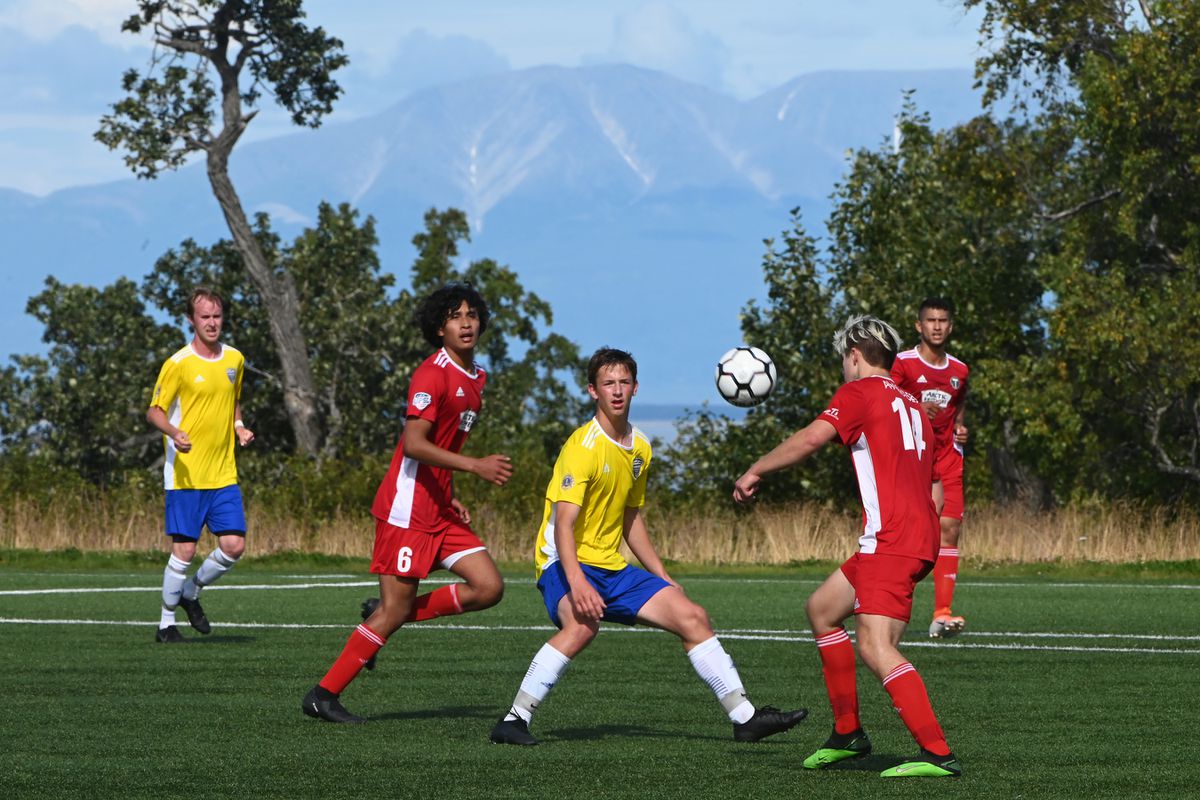 Mount Susitna is visible in the distance for a Sunday game at Kincaid Park between the Alaska Timbers (red) and Fairbanks Soccer Club. (Bill Roth / ADN)

Mount Susitna is visible in the distance for a Sunday game at Kincaid Park between the Alaska Timbers (red) and Fairbanks Soccer Club. (Bill Roth / ADN)

The United Premier Soccer League is 10 years old, boasts more than 10,000 players and 300 teams nationwide and calls itself the biggest pro development league in North America.

The Last Frontier Division joined the UPSL men’s league this summer, and the four-team contingent from Alaska needed all of three seconds to make a lasting impression.

In a July game between the Arctic Rush and Fairbanks SC, Paul Matyas of the Rush turned the opening kickoff into a 50-yard goal with a shot that surprised the Fairbanks keeper and gave the Rush a 1-0 lead three seconds into the match.

The goal set a record for the fastest in UPSL history and was voted by fans as the No. 1 goal of the month.

“They can’t forget about us now. We’re in their history books,” said Mike Naylor, general manager of the Rush.

Naylor and others in the Last Frontier Division hope to make a similar impression on Alaskans.

The division’s inaugural season ended Sunday after a season that was shortened by the pandemic but long enough for players to merit recognition on a national stage and for teams to gain notice at the grassroots level.

The goal is two-fold. The Last Frontier wants to provide high-level sports in a state that has no professional teams — the Alaska Aces hockey team, which folded in 2017, was Alaska’s last pro team — and it wants to give high-level Alaska players a place to play in the summer.

Hatcher Manning is a 17-year-old headed into his senior year at Service High who plays for the Alaska Timbers. He said the level of competition is the best he’s ever experienced.

“I’ve learned to be more physical and more confident,” he said. “There’s a bunch of college guys coming back for the summer, so that’s good. It’s a lot faster.”

Manning has twice been nominated as the UPSL Player of the Week, including this week, when he earned a nomination for scoring three goals in two games last weekend. The Timbers beat Fairbanks 3-0 on Saturday and 2-1 on Sunday to clinch the division championship.

Each week the UPSL nominates a field of four to contend for Player of the Week honors, and through nine weeks, Alaskans have grabbed four of the available 36 nominations. Joining Manning as nominees are Matyas and Cole Fox of the Timbers.

Matyas, an East High graduate, was a four-year player for Southern Oregon’s NAIA college team and distinguished himself by becoming the school’s first soccer player to garner first-team academic All-America honors. Fox is a former Dimond standout who played collegiately at UC Santa Cruz before moving on to law school.

“This gives college players an opportunity to come home in the summer and play at a high level,” Timbers coach Jeremy Johnson said. “It gives our top high school players a step up from the men’s league.”

It’s also a place for talented older players to stay competitive. One of the division’s top players is Bon Chapootorn of the Timbers, a 34-year-old who used to play professionally in Thailand. Between older guys like Bon and those with college experience, “you see a little harder tackling and a bit more aggressive play,” Johnson said.

The Last Frontier Division has two teams in Anchorage — the Rush and the Timbers — plus the Fairbanks team and Mat-Su United. Next season it plans to go international with the addition of the Yukon Selects from Whitehorse.

“We’re really trying hard to develop teams that communities rally around,” said Brett Banks, the Last Frontier manager. “That’s what they do in Europe — there’s eight tiers of teams, and every town has a team. That’s where we want to be, where games becomes an event, an experience.”

Before mandates limited the size of crowds, games this summer drew 100 to 300 spectators despite scant media and marketing. The USPL live streams every game at MyCujoo TV — the Timbers use a two-man broadcast teams for its home games at Kincaid Park — and some Alaska games have attracted as many as 500 viewers, Banks said.

It’s a modest start, but ambitions are huge.

“We’re the only high-level team sport in Alaska besides (the Alaska Baseball League),” Naylor said. “The Aces are gone. There’s a massive window open. We’re going to come in and be the next high-level sport in Alaska, and we’re not going anywhere.”

The UPSL is a semipro league that consists of several divisions, and the Alaskans play in the highest of those. Though some divisions pay their players, the Last Frontier does not because a significant number of players are also playing college or high school soccer and they need to preserve their amateur status.

Some Alaska teams pay their coaches, Banks said, and some use volunteers. Players pay nominal fees for tryouts and insurance but unlike adult recreational leagues, they don’t pay a player fee, and the team takes care of uniform and other costs. Because the Last Division is considered the highest level of soccer in Alaska, they get their pick of officials on any given day, he said.

Teams didn’t charge admission this year but probably will next year, Banks said.

Games — which this season were played at Kincaid Park and Service High in Anchorage and Meadow Lakes Park in the Valley — feel different than rec-league games.

They start with the national anthem, the fields have scoreboards and clocks, and there’s usually a PA announcer and player introductions. Some games have 50-50 raffles and food trucks. There has even been fireworks at Mat-Su United games at Meadow Lakes Park, Banks said.

The UPSL requires players to be 16 or older, and both Anchorage teams are connected to clubs with youth leagues. The Timbers use younger players as ball boys for most of their games, and Johnson and Naylor both said the UPSL’s high level of play gives those younger players something to strive for.

“It’s the next step that we’ve needed for a while,” Naylor said. “I hope the community will see what we’re trying to do here and what this means to Alaska as a whole.”