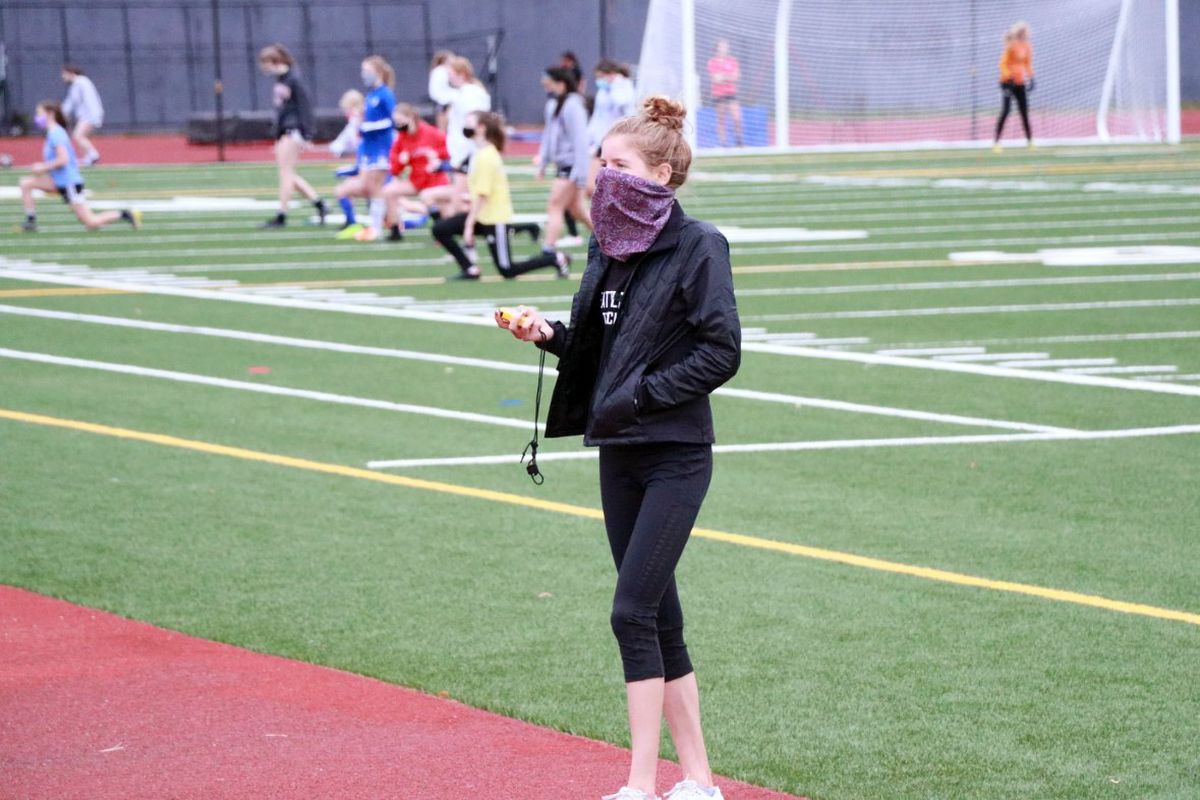 Kenai's Allie Ostrander helps run a practice for the Seattle Pacific running team this month (Oct. 10, 2020 at an intrasquad cross country race at SPU) in Seattle. Ostrander, a three-time NCAA champion, is working as a volunteer coach while continuing to train for the 2021 U.S. Olympic track trials. (Photo provided by Seattle Pacific)

Kenai's Allie Ostrander helps run a practice for the Seattle Pacific running team this month (Oct. 10, 2020 at an intrasquad cross country race at SPU) in Seattle. Ostrander, a three-time NCAA champion, is working as a volunteer coach while continuing to train for the 2021 U.S. Olympic track trials. (Photo provided by Seattle Pacific)

Ostrander, 23, is working as a volunteer track and cross-country coach for Seattle Pacific University, the NCAA Division II school that competes in the same conference as UAA.

A three-time NCAA Division I steeplechase champion from Kenai, Ostrander skipped her final year of eligibility at Boise State to turn professional after the 2019 NCAA outdoor track season.

She’s a member of the Brooks Beasts running club sponsored by Brooks Running, a Seattle company whose headquarters is located 1.25 miles from the Seattle Pacific campus, according to a news release from the school.

“(Coaching) is kind of my career ambition outside of professional running,” Ostrander said in the news release. “I thought it would be a great opportunity to see what goes on behind the scenes and be involved and learn from a really quality coach.”

Ostrander is working with Seattle Pacific distance runners, who are going through limited practice sessions during the COVID-19 pandemic.

“There’s no better way to learn about greatness than to be around people who have done it and are continuing to pursue it,” Karl Lerum, SPU’s head track and cross-country coach, said in the news release.

She continues to work toward her goal of making the U.S. team for next year’s Summer Olympics in Tokyo, which were pushed back one year because of the pandemic. But with most track events canceled this year, she has time to help out at Seattle Pacific.

“I enjoy posting recipes and things about food that I eat,” she said. “A lot of people would direct-message me on my personal page and ask for recipes. So I said, ‘I’m just going to make a separate page for this.’ It has been fun just playing around with it.”

Fact: wearing pajamas at dinner is totally acceptable if you make brinner. As you can see, I'm pretty excited about this. If you want to be this stoked make this frittata and maybe wear PJs while you do it 🤔🤔 Sausage and Kale Frittata Ingredients: 1/2 onion, diced 1 yellow squash, diced 2 Italian sausage links, diced 3 cloves garlic, minced 2c kale 1t rosemary 4 eggs + 4 egg whites 1/2c cottage cheese 2-3T milk 2T nutritional yeast 1/4c parmesan Salt & pepper Directions: Saute veggies and sausage over medium high heat. Season with rosemary, salt, and pepper. Whisk together the eggs, cottage cheese, milk, and nooch. Season with salt and pepper. Reduce the heat to low and let the pan cool slightly for a minute. Pour the egg mixture evenly over the veg/sausage. Cover and cook on low for 10-15min until almost cooked through. Sprinkle with parmesan and broil for 2min until the cheese is melted and slightly browned. I served this with buttermilk biscuits and salad. Nom city. #brinner #eggrecipes #easydinner #brunchideas #dinnerideas #healthyeating #noms