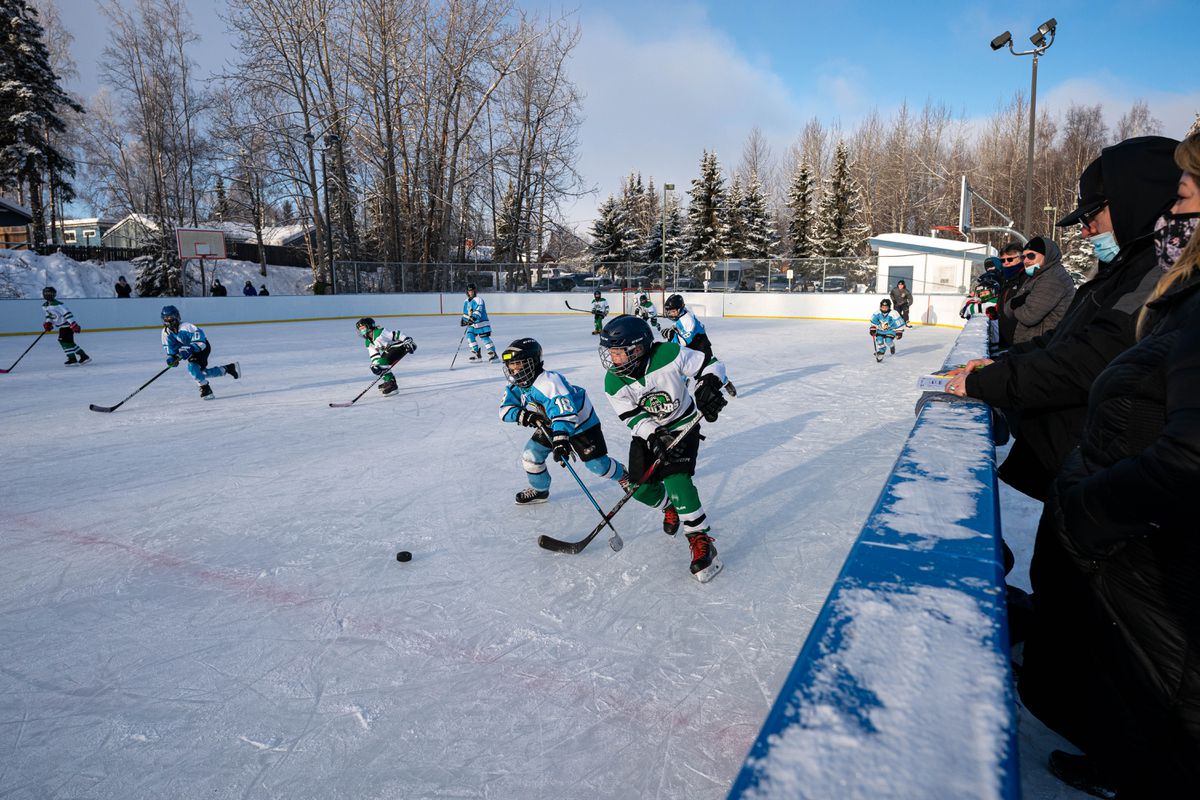 Unlike the surprising comeback of mom jeans, the growing popularity of skating outdoors can be explained.

Between lockdowns, social-distancing mandates, cabin fever and the price of indoor ice, gliding across a glistening surface in the great outdoors is en vogue.

Eight elementary school rinks, from South Anchorage to Fire Lake, have been added to the city’s wide array of places to take advantage of Alaska’s built-in refrigeration system.

One of those rinks is at Airport Heights Elementary School, which takes the pressure off a nearby rink beloved by hockey players and other skating enthusiasts since the 1960s.

Tikishla Park, at the end of East 20th, is home to the Scotty Gomez Hockey Rink. The Gomez Foundation began booking time at the rink at the start of the winter, and it’s been a busy place week after week.

“It’s the only way we can provide hockey to our players right now,” Mandy Reale, the hockey director for the Gomez association, said of the outdoor accommodations.

As a PE teacher at Kincaid Elementary School, Beale is tuned in to the value of getting heart rates up and having fun in fresh air.

“Until yesterday, when school opened, most of our players haven’t had much in-person social outlet besides hockey,” she said.

Outdoor ice makes sense because it saves cents. Indoor ice can be as much as $460 an hour, which according to general manager John Stenehjem is the going rate at the O’Malley Sports Complex. Permits for 60 minutes of municipal outdoor rink time are $26 -- and it’s free if it hasn’t been reserved.

Reale said using outdoor facilities “means we can take less money from our families -- it’s an added benefit in tough times, as many of our families have been impacted financially due to shutdowns.”

Laura Davis, president of the Anchorage Women’s Hockey League, is a fan of skating outdoors and plans to schedule outdoor games in 2021-22.

She coaches an under-10 team that has been taking advantage of the conditions and wants the women’s league to do the same going forward.

“... We see after this season that it is a missed opportunity and plan to integrate outside ice into our schedule next season,” Davis said.

Ice is also solid and smooth at Cheney Lake, Westchester Lagoon and the Cuddy Midtown Skate Pond, which are maintained daily by the municipality, weather permitting.

“Last year in Anchorage, we had a really bizarre kind of freeze-up … but that’s not the case this year,” he said. “We’re running right on track for our local ice thickness.”

Editor’s note: This story has been updated to remove a reference to Portage Lake ice conditions. Anyone who chooses to skate on wild ice in the backcountry should verify ice thickness, carry rescue and safety gear and be prepared for variable and adverse conditions.